Beat Butt Wink: Squat Big Without Hurting Your Back

Something strange is happening at the bottom of many lifters' squats. It goes by the name of butt wink, and if it's severe, it puts their back health and lift numbers at risk. Here's what you need to know!

Squat depth is a touchy subject. On one hand, it's hipper than ever to hate on lifters for doing too-heavy quarter-depth squats. But on the other hand, if that lifter decides to drop a few plates and go to full depth, he'll get even more criticism to go along with his DOMS.

Tell me if you've ever had this shouted at you: "Go lower. Lower. Whoa—butt wink!"

What is commonly known as "butt wink" refers to the moment at the bottom of a squat when the pelvis begins to rotate backward and slip under the body. You'll also hear it referred to as "posterior pelvic tilt" or just "pelvic tilt," and when it's severe, it can be bad news for your lower back.

You can see people do everything they can to avoid butt wink. They start their squat with crazy overarched backs, most commonly. Or they pull out of a perfectly good squat at the slightest sign of pelvic tilt, beat themselves up about it, and try every obscure assistance exercise that's ever been mentioned in a forum post.

It's time to set the record straight. Yes, it's important to achieve good levels of flexibility and joint integrity, particularly if you're moving heavy weights in a complex movement like the back squat. But, just like passing the knees over the toes, pelvic tilt has gotten blown way out of proportion. It's a question of degrees and personal build—and sometimes, the exact things you do to avoid it can make it worse.

Let's start with the basics. Your lumbar (lower) spine can be in one of three positions at the bottom of a squat—or during any other movement for that matter: extension, neutral, or flexion.

Carrying a heavy load—or even a relatively light one—with the lumbar in flexion is unquestionably dangerous. However, many form-sticklers and fitness pundits start cringing the moment they see any pelvic rotation in the bottom position of the squat. Their heart is usually in the right place, but they often cry "flexion" when the truth is closer to "neutral." 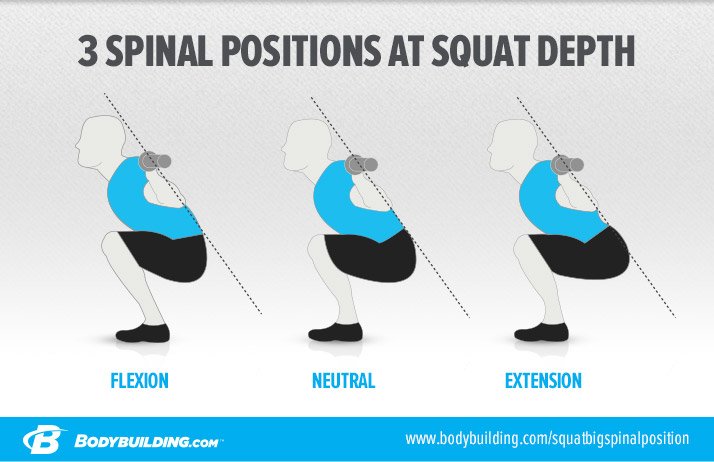 Bearing a load with a neutral spine is safe and doesn't negatively affect strength. And some degree of butt wink is necessary to come out of back extension and into a neutral position. That's right: You can be a strong, mobile athlete squatting with good form, and you'll still experience some degree of pelvic tuck at the bottom.

Look at any Olympic lifter, or any of the strongest athletes who use full-depth squats, and you'll see their back will slip into a neutral spine position at the bottom. Or just watch me rep out with 315 in the video below. There's a wink on every rep that brings my spine to neutral, but not to flexion. I wouldn't even be able to do one rep with this load on a flexed spine without having my chiropractor on speed dial.

Want to know if your wink is the permissible type or the dangerous one? You need plenty of experience and a discerning eye to tell. Watch plenty of good squat videos, get instruction and feedback from people who know what they're doing, and then put in your reps. You will find the line.

So your friend the strength coach took a look at your squat video, and it's confirmed: You've got a case of bad butt wink. What does this mean? Generally, at least one of these three factors is in play.

1. You have poor hip flexibility

If you have tight hips and hip flexors, then you probably start your squat from a position of what's known as "anterior pelvic tilt," where the hip flexors pull the lower back into extension as they tighten, causing the pronounced arch seen in many people's normal standing posture. As you try to work your way down into a squat position, your tight hips can pull on the pelvis and create a premature wink during the squat motion.

The solution: First work on improving hip mobility. Goblet and overhead squats are great lifts to achieve this. Both movements also teach you to squat with a tall spine and open hips. When proper form is employed, the hips are trained to drop more downward than backward, which improves mobility and minimizes butt wink. For beginners, I like to recommend the goblet squat in particular as the quickest and easiest way to get better at squatting.

2. Your body works against you

People are all built differently. One person's hip sockets may be placed in a different place on the pelvis than someone else's. Some may find that they need to use a wide stance in order to squat without a big-time wink, whereas some, like me, like to go narrower. Some people have deep hip sockets that may prevent a full-range squat at any width, and if they try to force it, they'll feel discomfort or pain in the hips.

Especially if you're a tall guy like me, improving your ankle mobility could be a key to unlocking your squatting potential. Your ability to dorsiflex (bend your foot toward your shin) matters big-time if you want to get to full depth without dangerous amounts of butt wink. Despite what some people will tell you, being able to get the knees out over the toes is essential for many of us to be able to safely squat—particularly for the front squat—and it lowers the shear force placed on the lower back.

Check out this video of me front squatting to get an idea of what forward knee tracking looks like on a 6-foot-4 lifter:

The solution: Set up for your barbell squat with tight abs and squeezed glutes. Loosen these muscle groups in order to arch the back; this will result in the pelvis tilting forward, shortening the hips before you even start squatting. From this stance, the wink will occur earlier and more prominently than if you started in a strong and neutral position. Think like a powerlifter here: Get tight and stay safe!

I could list a bunch of assistance exercises at this point to help minimize butt wink, but I believe that practicing the movement itself is of paramount importance. Utilize a range of squat variations to improve your mobility, geometry, and flexibility. Then, use corrective exercises like Peterson step-ups, split squats, and terminal knee extensions as accessories to ensure smaller muscles fire powerfully. 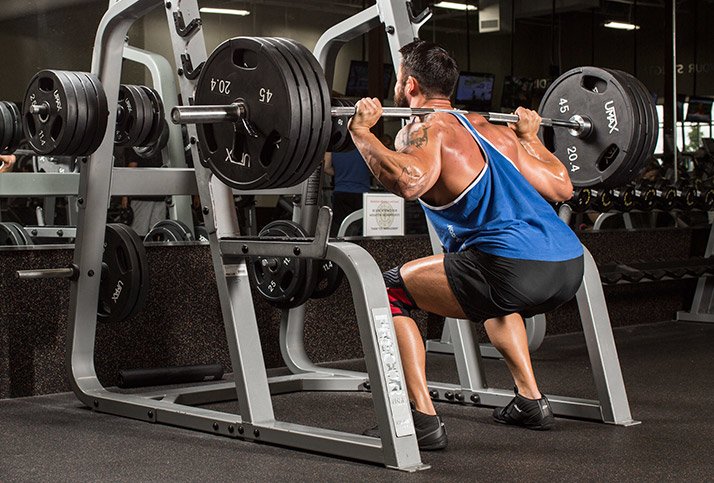 If you have high hopes for your squat, you'll need to check your ego at the door and take the time to become a better squatter before you become a bigger squatter. Lower the weight significantly, build up the range of motion incrementally, and set yourself up for long-term strength and performance gains!

Lee Boyce is the owner of Boyce Training Systems, and is a fitness author and strength coach based in Toronto, Canada.