Boxer Chad Howse knows what it takes to go the distance in the gym, too. After 6 years of futility, he figured out how to gain 32 pounds in 32 weeks!

I actually got started about 7 years later when I was 16. I'm not sure if you've noticed, but status is a pretty big thing in high school. Athletes score - in more way than one - and even though I was an athlete, I was a toothpick, a twig, a gangly-looking individual who got looked past by girls on a daily basis, not looked at.

My best friends were all freaks. They were massive and they got the ladies. When we went to a party, they attracted the good attention while I just faded into the background. I looked like a 12-year old even when I was 16. This became even more of a problem in college when guys actually started looking like men.

They had hair on their face and I was still looking like a kid. It wasn't from a lack of effort, actually much the opposite. I trained my butt off, but I could never add any lean muscle.

I started training because I wanted confidence. I wanted to attract some good attention from girls, not giggles and laughs at my scrawny physique. But I was also an athlete and I desperately needed to become stronger, more powerful and more athletic. I need mass and I wasn't getting it even though I was in the gym 6 times a week.

I was confident in who I was, but my body didn't convey this at all. I saw muscle, lean muscle, with 6-pack abs as the remedy. Needless to say, 32 pounds of lean muscle and 32 weeks later, it was. 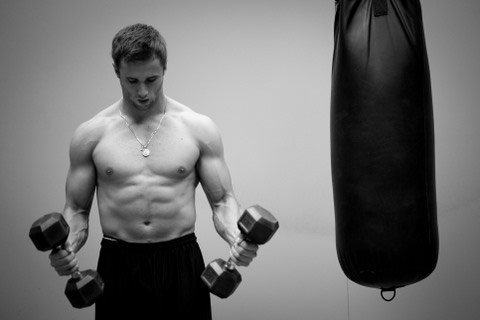 I was confident in who I was, but
my body didn't convey this at all.

I spent my first 7 years in the gym going nowhere. I was doing body part splits that consisted of far too many reps, not enough recovery time, and not enough intensity. I'd pick up a bodybuilding magazine, buy a product that a genetically gifted bodybuilder put out and fail.

Basketball was now in the rearview as I had a nagging knee injury that forced me out of the sport after my first year of college ball. A year and a half later I was now boxing - and loving it. I was doing well too, but the training just wasn't what I wanted. Or at least I wasn't getting what I wanted or expected.

My trainer was an old school kind of guy. As a result, we trained like they have been training in boxing circles for over a hundred years: tons of running, calisthenics, and bodyweight exercises. No plyometrics, no lifting, and no power.

I knew I needed to be doing something else as far as my training was concerned. And I still wanted muscle - even though I had kind of given up after 7 years of failing, it was still in the back of my mind. To make a long story short, I got a job as a trainer at a gym that specialized in training high-level athletes.

They trained pro football players and semi-pro hockey players. I was stoked to get a job there, and in my first day on the job I met the guy who would help me turn things around. He trained pro ball players who needed to build muscle mass, power, speed, explosiveness and maintain it during the grueling season.

I watched what they were doing - a lot of circuit stuff with heavy lifting and performance-based drills built in. And I wanted to learn more. We sat down and went over my problem - I was hoping we'd come up with a solution, but to be honest after failing for 7 years I wasn't all that confident we would.

We talked about fighting, how hard I needed to push my body, but also how intensity would be more effective than duration. We spoke about the different exercises I'd need to add to my training, and what kind of progressions I could use.

I needed speed and power so we added in things like Olympic-lifts and plyometrics, but also traditional compound exercises so I could build some mass - even though mass isn't good for a fighter, I still wanted it in a big way.

What we came up with:

Challenge workouts. Workouts that would have a set rep count, I'd have to complete each exercise before moving onto the next. I'd be rewarded for my hard work and mental toughness by a better score or time.

The motivation factor was there, plus the fact that I'd be keeping score of each workout and I didn't want to let the guy down or myself down. I'd go through a 12-week phase using a certain weight, and then I'd increase weight.

So I'd get to the point where I dominated my workouts with a set weight I'd use, then I'd switch things up again and boom, more results. I never hit a plateau either because the workouts changed weekly. We cycled different workouts in so I wouldn't do the same one 3 consecutive times. My muscular endurance dramatically increased, so did my strength, power, speed and I gained 32 pounds in 32 weeks.

The immediate results were 2 knockouts in my next two fights. I lost my first two fights. When I started this system I won my next 4 - 2 by KO. Holy crap that felt good!

Each exercise done for 50 reps:

I didn't really count calories; I just ate as much as possible. 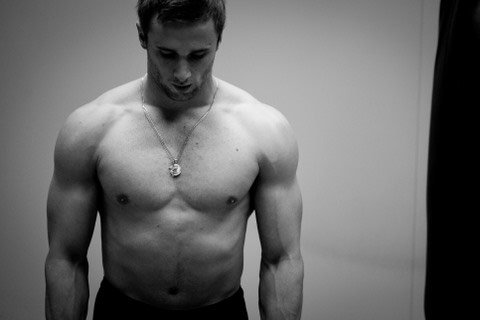 I'd add an auxiliary day in one of those days, and would later progress to a 4-day split. But this is what I started with. 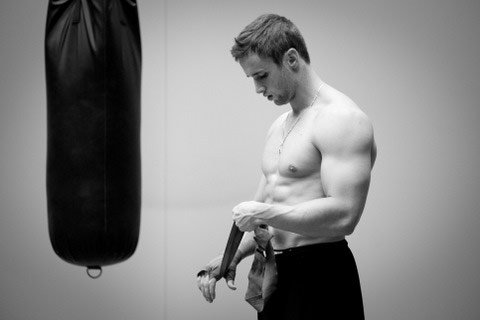 Chad's new training regimen allowed
him to win his next four fights.

When you're starting out, focus on compound exercises. Leave the isolation exercises for when you've built a better base. I actually still don't do a whole lot of isolation in my workouts and have noticed increases in the size of my arms and calves.

Rest is as important as your training. I'd train a maximum of 3 days per week. Also, if you really want this transformation, cut out alcohol, get at least 8 hours of sleep each night, and take a nap or two during the day that goes no longer than 30 minutes.

If you do the workouts that I just mentioned you're going to be breaking down your muscles a lot, and you're going to need to give them the rest they need and the nutrients they need as well. Make sure you get a post workout shake in with vitamins within 15 minutes of completing your workout.

Set a short goal. My original goal was for a 1-month transformation. That was the time I felt like I could stay focused. What I ended up doing was taking a week off after every 3 week phase. This allowed my body to recover, but also my mind.

I'd then hit the ground running and would kill it in my next 3-week phase. Intensity is one of the most important things in a successful transformation. Do whatever you have to do to remain focused and intense when you're in the gym.