Grab, Sit, Repeat: The Simple Power Of The Goblet Squat

You heard that squatting is a basic human movement. So why are we so bad at it? What can we do? Meet the goblet squat, a movement that can help anyone master squatting form.

Often dubbed the "king of exercises," the back squat offers a whole host of benefits, including but not limited to: stronger and meatier legs, a rock-hard behind, and extra points on the bad-assery scale. For better or worse, "How much ya squat?" is the lower body equivalent of, "How much ya bench?" when gym-goers size each other up.

Despite being one of the greatest bang-for-your-buck movements for athletes, the back squat is not appropriate for everyone. Most training programs benefit from featuring multiple variations of a movement. Luckily, there are many squat variations, including the front squat, Zercher squat, and box squat. They all have their place in a training program.

However, for my money, one of the absolute best squat variations may also be one of the newest: the goblet squat. This fundamental exercise is easiest to master for folks from all walks of life. The greatest part about it is that everyone can stand to benefit from it (barring contraindications, of course). Even if you squat heavy right now, it's likely that some time with the goblet could help your form.

I wish this wasn't a common scene at the gym ...
A guy approaches an Olympic bar on a power rack. He slaps on a few plates on either side and proceeds to back squat. His warm-up sets don't look bad; his body stays more or less upright, he's got good depth, and the grunting is kept to a minimum. As I watch his first heavy set unfold, however, I start to think I should have my phone ready to dial 9-1-1. 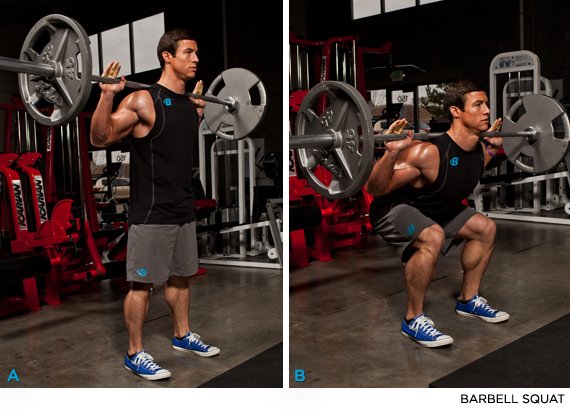 He drops down to a half-squat with wobbly knees; he's somehow convinced that the weight on his shoulders is not 50 pounds too heavy. On his way back up, he begins to lean forward, and I start wondering if he's doing a good morning instead of a squat. Where'd that hip hinge come from? I debate what to call this new movement (Back-morning? Good-squat? Definitely not the latter!) while his back flirts with the idea of snapping clean in half.

One, two, three ... that's three too many seconds he's been stuck in that same position without moving. His grunts start to echo across the gym and threaten to shatter windows, break mirrors, and awaken hibernating bears. Finally, an excruciating six seconds later, he climbs his way back up to a standing position. I gasp for air as I realize I've been holding my breath the entire time. I'm curious whose heart is racing faster at this point, his or mine. Nevertheless, I'm relieved that he finishes the movement and will rack the weight soon.

But no. Just as I'm about to turn away and continue on with my own workout, I see in the corner of my eye that he's going down for another rep.

This time, I can't look.

Invented by the one and only Dan John and named after the position in which the weight is held, the goblet squat is one of the most idiot-proof ways to learn and reinforce the basic squatting movement pattern. I've used this exercise successfully with clients ranging from 8-to-50-years old. Unlike most exercises, this one is more difficult to execute incorrectly, which is why I like it so much.

The setup of the goblet squat, from the foot position to the way the weight is cradled against the chest, essentially sets you up for solid form from the get-go. I recommend this to everyone: the beginning strength trainee who is unfamiliar with what a proper squat feels like, the fitness buff who wants to squat with the best possible form, and the individual looking to stay healthy and move well. It's especially great for those with subpar ankle mobility, poor wrist flexibility, tight lats, injured shoulders, and/or long legs. I think it would be fair to say that most of us fall into at least one of those categories. 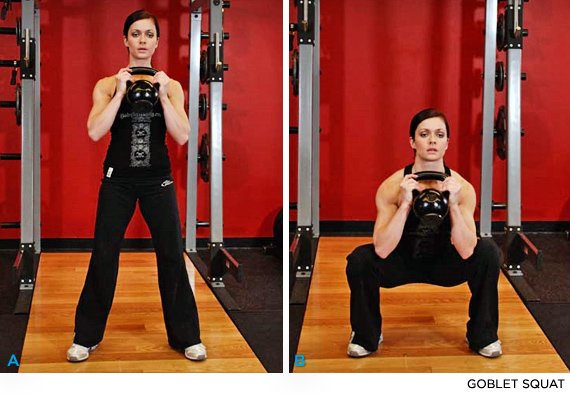 The few coaching cues involved in the goblet squat more than suffice to get the job done:

Simple enough, right? Make sure to not overthink it. Think less, squat more, and everyone will be happy.

Similar to a front squat, the goblet squat keeps you in an upright position because of the way the weight is positioned. This means you recruit your quads more than your posterior chain, likely causing you to lift less weight than you would in a back squat. That said, if you've been a shallow squatter for a while, the new depths to which you'll go in the goblet squat might leave you feeling it in your hammies and glutes.

If you're wondering what weight to grab, my general policy for any new movement is to always start lighter than what you "think you can handle." I'd much rather see you bang out a set, decide it's far too easy, and then go up 10 pounds, rather than have an inflated ego lead to injury. (Yes, of course, it's possible to injure yourself in a goblet squat).

As far as when to execute the goblet squat in a workout, it works great as part of a dynamic warm-up to open up the hips and groove squatting form. Of course, it can also be one of the core exercises in a session. If you want, think of it as a substitute for the regular back squat for a while, and it will only help you get improve that more-famous movement in the long term.

Additionally, though it's not everyone's taste, the goblet squat is safe to practice on a daily basis. This isn't permission to go all-out everyday; rather, use this as a wrench in your toolbox for mobility and tissue quality purposes. To do this, simply grab a light weight and toss in a few sets of 10-15 reps throughout the day. That should do the trick.

What are you waiting for? Try it already!