5 Exercises That Are Better With Bands

Looking for an edge to increase your muscle and strength gains? See how resistance bands can be the Band-Aid for your workout.

Elite-level bodybuilders and powerlifters get big on classic moves, but not just classic moves. They're also great at simply discovering stuff that works in the gym. The lab coats then figure out the "why" later.

One of my favorite cases of this is elastic bands. Bands offer a number of advantages over traditional resistance training by overloading the musculature, enhancing the rate of force development, and even allowing athletes to work around injuries. They allow you to deliberately attack sticking points, getting stronger where you need it most.

Let's instead take a look at five exercises that can be dramatically enhanced with additional band resistance. 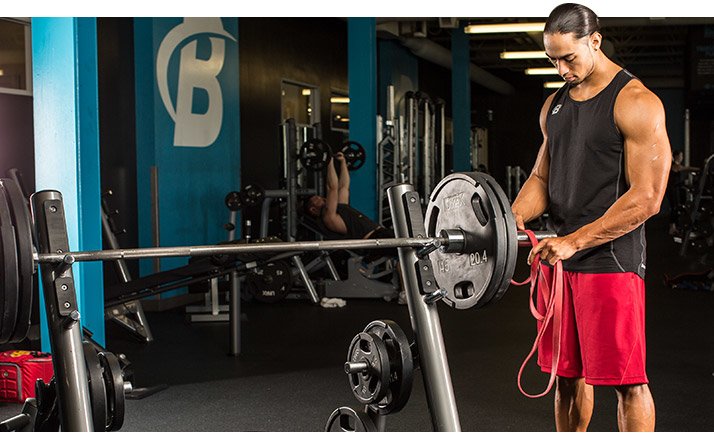 Bands offer a number of advantages over traditional resistance training by overloading the musculature, enhancing the rate of force development, and even allowing athletes to work around injuries.

Which level of resistance band you use is dependent on how much weight you'll be training with. Here are some guidelines. There is overlap, so if you're in between two levels, buy both.

How to Attach Bands

Loop two bands around the barbell and to the bottom of the rack itself, if there aren't built-in attachments, like many racks now have.

Run a single band under the bench, or attach it to a solid low-lying anchor point.

Wrap two bands onto attachments on the platform, or attach to a rack or hooks in front of you. Also possible but less ideal: Loop a single band under your feet.

Loop a single band around your back and over (not under!) your elbows and around the dumbbell handles

Squats have what's called an ascending strength curve. An ascending strength curve simply means that as leverage increases, the amount of muscular tension required to lift the barbell decreases. From the bottom of the squat, lifting the barbell becomes progressively easier until the rep is complete. Hence, you can half-squat (doing just the top half of the squat) much more than you can full squat.

A number of machine manufactures have attempted to design machines to complement the ascending strength curve of various movements. While some attempts have been semisuccessful, a problem has arisen. Machines have preset movement patterns that don't adjust to the individual, but rather force the individual to do the adjusting. This can be problematic to anyone whose body type falls outside of what the manufacturer considers "average." Machines further eliminate any stability requirements, and they tightly control the resistance and movement speed in a way that a loaded barbell doesn't.

Because of these limitations, machines severely limit the training benefits your central nervous system (CNS) stands to derive. In other words, if you believe for a second that the latest squat machine or Smith machine will transfer strengthwise to your barbell squat, I want some of what you are smoking.

Bands solve the problem machines have failed to.

As you squat the weight down and then back up to the starting position, the resistance from the bands decreases on the way down and increases on the way up. As you get toward the end of the lift, more force will be required to finish the lift; in turn, more muscle fibers are recruited to get the job done.

Powerlifters have realized the benefits for decades; however, the benefits to the muscle-building enthusiast should be obvious. Because you're forced to recruit more muscle fibers, you'll grow and become a helluva lot stronger in the process.

When it comes time for your next squat workout, throw on some bands. For strength, I'd recommend keeping reps in the 1-3 range and in the 6-8 range for hypertrophy for 3-5 sets. Don't use bands with any other leg exercises in a workout where you squat with bands, though.

Forget the self-proclaimed bodybuilding messiah at the gym with the symmetry of a turtle who uses way too much weight with way too little range of motion on the bench press.

Technically, the bench press is a longer range-of-motion exercise. Like most exercises that fall into this category, the muscle is under a maximal amount of tension for just a short time. Because of the longer ROM, you're simply working at submaximal tension for a greater percentage of the lift.

Like the squat, the bench press has an ascending strength curve, so you're stronger the farther the bar is from your chest. This is why bands will be of benefit.

Being the youngest person to bench press 600 pounds raw, and now having coached many 600-plus-pound raw bench pressers, I can tell you bands played a role in their training and mine. I've even used band-resisted bench presses successfully with top pro bodybuilders like IFBB pros Branch Warren, Cory Mathews, and Johnnie Jackson.

As with squats, do 3-5 sets on the bench with 1-3 reps for strength and 6-8 for hypertrophy. Don't use bands with any other chest exercises during your workout.

Up until about 10 years ago, the deadlift was seen as sacrilegious for sports training outside of powerlifting, while "mainstream" strength coaches were busy squatting on BOSU balls and becoming street deadly with cardio kickboxing. Thankfully, the masses have woken up.

There's nothing more functional than using your posterior chain to pick up heavy weight off the ground and violently extend your hips to finish the job.

Ronnie Coleman built arguably the greatest back of all time with heavy deadlifts. The eight-time Mr. Olympia always trained with full range-of-motion deadlifts off the floor. This is why his lower-back development was light-years ahead of his competitors.

Other successful bodybuilders have opted for rack pulls or block deadlifts; in other words, partial deadlifts. They feel this more effectively hits the upper back because the shorter the range of motion means the muscles are under maximal tension for a higher percentage of time.

Adding bands to deadlifts combines the full range-of-motion benefits to the lower back with the upper-back benefits of partials. That's because deadlifts, like squats and bench presses, have an ascending strength curve—assuming your technique is dialed in. In the bottom position, where you are weakest, the bands have not yet started to pull tight, but as you lift the weight up and leverage improves, the band pulls tighter and tighter, increasing the amount of force required to complete the lift.

So, likes squats and benches, by adding bands to deadlifts, you've essentially morphed a partial- and full-range-of-motion exercise and kept the benefits of each. Here, IFBB pro Johnnie Jackson performs band-resisted deadlifts under my watchful eye:

Deadlift training is similar to squats: Do 3-5 sets training for strength in the 1- to 3-rep range and for hypertrophy in the 6- to 8-rep range.

Everyone from pretty boys to prize fighters have reaped the benefits of push-ups for decades—maybe centuries. Push-ups give you many of the same benefits of bench presses, and even some additional ones. Unlike bench presses, which require bulky and expensive equipment, push-ups force you to use core stabilization, because you have to move your own body weight. Essentially, they provide a core workout that's not found in many traditional chest exercises.

The difference, of course, is that push-ups don't light up your muscles to nearly the same degree as, say, a heavy bench press. Well, it turns out the band is the great equalizer. A recent study showed that there was no significant difference in EMG (electrical activity of muscles) in either the chest or shoulders between a 6-rep-max bench press and an elastic-band-resisted push-up.1

Packing a bench press may not be an option next time you travel, but throwing a resistance band in your bag is. Next time you train, give some band-resisted push-ups a shot; don't worry, you aren't sacrificing quality. For strength, do 4-8 reps; for hypertrophy, do 8-12 reps. Each lifter's band thickness will depend on his or her strength levels.

Many lifters avoid dumbbell flyes altogether, because going too deep can compromise the shoulders and there's virtually no tension at the top of the movement. Instead, they opt for cables.

Now, don't get me wrong&—there's nothing inherently wrong with cables. But by adding band resistance to the dumbbells, you get the continuous tension benefit of cables with the right amount of stretch overload from the dumbbells. We've basically taken a peak-contraction movement and a stretch movement and morphed them into one.

Assuming your shoulders are healthy, give these a shot next time you train, doing 3-4 sets and keeping the reps in the 6-8 range. Here IFBB pro Branch Warren does band-resisted dumbbell flyes on a flat bench:

Rules to Guide your Band Work

Because of the substantial overload caused by bands, I recommend these exercises be restricted to intermediate and advanced lifters with at least two years of serious strength training under their belt.

Here are a few guidelines I also recommend:

As a secondary note, Don't be afraid to use bands for machines, within reason. They can be attached to a pec deck or diagonal leg press and still work like they do with a linear barbell movement.

Too often in the fitness world, things come in extremes, like band-only training, barbell-only training, or even dumbbell-only training, but artificial limitations stunt development. By combining bands with barbells, dumbbells, and bodyweight exercises, you create synergy and have the tools to build a top-notch physique with the strength to match.