Your Hidden Source Of Strength: 3 Steps To Better Breathing

Some of the most difficult strength feats involve no weight at all. To master the one-armed push-up and one-legged squat, you have to dig deep and find new power sources!

All of the most powerful entities in the universe source their energy from the inside out. Our planet relies on its core heat to maintain a surface temperature warm enough to sustain life. A volcano is calm on the surface, but it could wipe out every living creature for miles should it erupt. When an atomic bomb is detonated, the explosion starts in the center and expands.

If you ever want to do a one-arm push-up, pistol squat, or any other high-level calisthenic movement—or for a heavy deadlift, for that matter—you're going to need to learn to tap into your deep internal forces, too. It's common in bodybuilding to attempt to isolate individual muscles or muscle groups, but in advanced bodyweight training, it's essential to approach everything as one cohesive unit.

When performing a push-up, your chest, triceps and shoulders do the bulk of the work, but your lats, traps, and rhomboids must act as stabilizers for you to maintain proper form. Your glutes, lower back, and abs also need to work together to keep the body straight. This synergy is the difference between a good-form push-up and a bad one.

You might not notice how much your entire body is involved in a basic, familiar move like a push-up. But if you try to perform a one-arm push-up, you'll see right away that you're going to need to use every muscle in your entire body to make it happen. It all starts from the inside out, with your breath.

It may sound ridiculous, but most people don't know how to breathe properly. Sure, you get enough air in your lungs to keep you alive, but when was the last time you really filled them to capacity or emptied them completely? There is a world of power in the breath! Learn to harness it, and you'll be one step closer to bodyweight mastery. 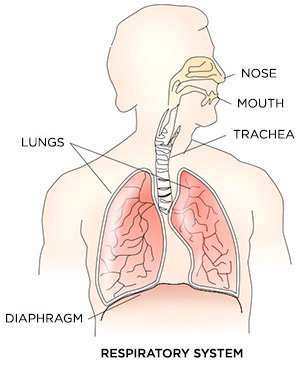 Everyone knows the abs are a crucial part of core strength, and most are aware of the role of strong obliques. Clever trainers will also point out the importance of the lower back muscles in overall core strength, because they act as an antagonist to the abdominals. However, there is another powerful antagonist to the abs which usually gets overlooked: the diaphragm.

Your diaphragm is a powerful muscle inside your belly that controls your breath. Based on that function alone, it's one of the single most important muscles in the body. During inhalation, the diaphragm contracts, creating space for your lungs to expand. Go ahead and take a big breath right now. Did your chest rise? It shouldn't. Proper activation of the diaphragm draws the breath deep into the belly.

If you're having a hard time figuring out how to breathe into your belly, try standing upright with one hand on your stomach. Then take a deep breath, trying to expand your abdomen against your hand. It may take some trial and error to figure out, so if your chest or shoulders rise, breathe out and try again.

This will make instant sense for some of you. For others, it'll be different from what you're accustomed to. But with practice, you should eventually be able to take a big breath into your belly without your chest or shoulders moving at all.

Once you figure out how to perform the basic breath, the next step is to exhale while deeply contracting your core from the inside.

There is an opening inside your throat called the glottis that can block air from exiting your lungs. Use it like a built-in pressure valve to gradually let air seep out as you tighten your abdominal contraction. Practicing this technique will help you learn to control your breath and use your diaphragm and glottis to tense your body from the inside out.

If you were to sit and try to tense every muscle one-by-one while breathing normally, you'd quickly find you didn't have enough energy—or enough brain space—to go around. However, if your energy comes from within, it is possible to achieve a kind of full-body tension that ties together everything from your feet to your fingers. 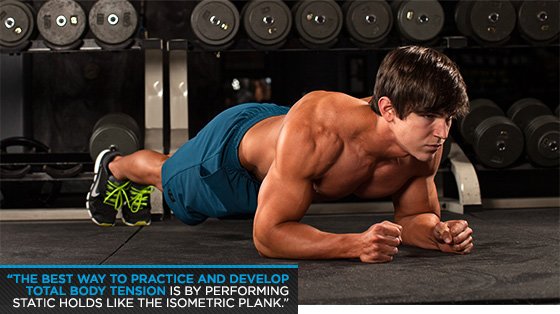 Probably the best way to practice and develop this type of total body tension is by performing static holds. Try using the breathing technique we just practiced during an isometric plank. Get onto your elbows and toes with your body in a straight line from the back of your head to your heels. Focus on your breath and begin squeezing your whole body as you exhale: abs, glutes, inner thighs, quads—everything. The more you can tense your entire body, the less any one part will have to shoulder the burden.

Once you get the feel for creating total-body tension, you'll soon be ready to transfer that newfound power to harder moves like L-sits or elbow levers. When you advance to more difficult holds, don't be surprised if some muscles are involved in ways you didn't expect. New movements can also make you sore in surprising places. I once strained my groin while practicing the human flag!

Breath control is great for static holds, but it's also fundamental when practicing difficult dynamic exercises such as the pistol squat and one-arm push-up. If you feel like you should have the strength to perform these maneuvers, and yet they still make you feel weak when you try them, more powerful breathing could help you to get over the hump.

The valsalva maneuver is a well-known breathing technique in powerlifting circles, and it can be incredibly useful in bodyweight training as well. The technique involves using your diaphragm to create a bubble of air in your belly, which stabilizes the trunk during heavy lifting. Because you have to hold your breath while you do it, the technique is often discouraged by fitness professionals. In fact, the first time I ever saw the term "valsalva maneuver" was in a popular personal training textbook warning about the dangers of using the technique for barbell training.

The truth is the valsalva maneuver is useful for the right person in the right scenario. However, there is a slight risk of fainting when using the technique during a heavy lift, so folks with a history of fainting, high blood pressure, or both, might be advised to avoid it. However, when we're talking bodyweight, the risk of self-harm is far less than for, say, a max bench press. I've seen plenty of people fall on their butt when learning a pistol, but I haven't seen a single one lose consciousness.

To use the valsalva maneuver during a one-arm push-up or pistol squat, inhale into your belly during the lowering phase of the movement. Hold your breath briefly at the bottom and keep it there as you begin coming up. Wait to exhale until you are just shy of halfway up—the "sticking point," as it's often known. The air bubble in your belly will help stabilize your spine during the critical transition point.

The breath need not be held more than a second or two for each rep. Any longer could have adverse effects, but the movement shouldn't require any longer a hold than that anyway. It may seem obvious since we're talking about difficult movements like one-arm push-ups and squats, but the valsalva technique works best when applied to low rep ranges. Doing lots of consecutive reps in this manner could cause an unsafe spike your blood pressure.

Though learning to control your breath can help you tap into your total body strength, there's no magic bullet here, or anywhere else in the world of fitness. These techniques can help, but there will never be any way to achieve advanced bodyweight feats without work. It takes time and practice to achieve moves like the one-arm push-up, pistol squat, or human flag, but if you put in the time and get to know your body, it's a journey worth taking.