Whether it's a silly fad or serious lifestyle endorsement, this Dad-Bod business is doing more harm than good. Learn why it's really a recipe for disaster!

Every woman has been asked, at one time or another, "What's your type?" Sure, this could be a sneaky segue into a long conversation about astrology, but more often than not, the question is about preferred physical characteristics: Do you like guys with brown or blond hair? Do you go for big shoulders over big arms? What's the body you really desire?

When it comes to bodies, thankfully the sea is full of diverse fish: Shaq-tall, Dudley Moore-short, Hugh Jackman-ripped, Jimmy Stewart-slim, and everything in between. Now there's even a new classification for women who seemingly crave a mixed bag: the Dad Bod. Not exactly fat, but definitely not slim. Defined more by inaction than action, with a pudgy tummy that threatens to blossom into a grown-up beer belly. Sure, the arms and legs work, but they're nothing to write home about.

Basically, a Dad-Bod guy looks like he might have been a jock in high school, but the minute he graduated, he discovered he really loved beer, traded in his cleats for some flip flops, and forgot what he learned growing up: everything in moderation, your health is your most important investment, and your body is a temple. Now that temple is a little round and pillowy, much like the couch he kicks back on.

The Sad Truth About Dad Bod

I have always been a big fan of men in pretty much all shapes and sizes, so I'd never expect every man to be a fitness model or bodybuilder. However, the sad truth is that the Dad Bod is often just a seed waiting to sprout man boobs, flabby arms, and a laundry list of potential health problems. If you're a 20-something guy with a modest Dad-Bod gut, those love handles will become a full-fledged inner tube by the time middle age beats down your door. If you're packing an extra 20-30 pounds at 25, and you plan to maintain the same lifestyle, just imagine yourself two decades later.

You'd like to think your metabolism is going to stay as fine-tuned as a Ferrari 458—hell, I'd like it if my breasts would stop their determined southbound march—but your fantasy probably won't come true, especially without consistent exercise, attention to nutrition, and physical activity. "There's time to exercise tomorrow," you might think, or "My diet starts Monday," but those good intentions have a tendency to pile up like extra inches on your stomach.

I know it's hard to believe that one day you could relate more to Hank Hill than Bobby, but trust me, it can happen! The years fly by and you can get sucked into a dizzying vortex of work, kid-wrangling, lawn-mowing, and bill-paying. Before you know it, jeans with an elastic waistband won't seem all that ridiculous anymore, and you might even have a hard time climbing the stairs or playing with your kids.

If you're packing an extra 20-30 pounds at 25, and you plan to maintain the same lifestyle, just imagine yourself two decades later.

If you continue living the Dad-Bod lifestyle, before you're even able to trade in that family car for a midlife crisis hotrod, your neglected and over-indulged Dad Bod will become a Gramps Bod. You'll have to give up your prized beer and nachos for blood pressure pills and Viagra. Instead of looking forward to your golden years, you'll be too busy trying to manage your type 2 diabetes and hoping erectile dysfunction doesn't ruin your night's big plans. I know I don't have to tell you this, but there's nothing sexy about that.

You know what is universally sexy? A healthy body. Forget about anyone's expectations, that hot chick's favorite "type," and even the goals of other guys here on Bodybuilding.com. A healthy body radiates a happy, confident outlook, and those are always the hottest qualities a man can possess. A truly healthy body doesn't have a squishable mound of fat hanging over the waistband. Whether you want to be athletic, have abs for days, or be a weight-crushing monster, the choice is yours. Just choose healthy—for now and your future.

A healthy body, like anything else worth having, takes work and dedication. But being healthy isn't just about vanity; it's about living. It's about taking care of yourself for the long haul—not just for yourself, but for the sake of your family and loved ones.

Of course, achieving that body and living an active life shouldn't be drudgery. Far from it! Fitness should be fun. It's personal. Whether you love lifting weights or hiking on the weekends, keeping yourself in shape shouldn't feel like torture. It should be an adventure—and yes, it's one you can take with the whole family.

Breaking Down the Dad-Bod Fad

Now, based on my many years of not earning a degree in psychology, but actually fighting in the trenches of life, I have my own take on this whole Dad-Bod frenzy. Given that I'm a woman of a "certain age"—translation, I've turned 39 a few times now—I think this much ballyhooed attraction to Dad Bods isn't so much for the physique. It's for what it represents.

A man with a Dad Bod seems to have a certain carefree gait, an "I know who I am and I like it" quality. Dad Bods aren't self-absorbed with their appearance, which is great, because there's nothing worse than a man more concerned with his appearance than you are.

Ladies, maybe you feel that a Dad-Bod man looks like he'd have a steady job, a reliable car, and even a mortgage he can actually afford to pay. He probably even loves kids! Swoon!

Mr. Dad Bod loves to have a good time, and he loves for you to have a good time. One more beer? Great! Two more? Even better, and let's get some more Queso Fundido for these chips! Best of all, if Mr. Dad Bod is happy with his body, he's bound to be thrilled with yours, even after a couple of kids, right? Makes sense to me!

Or maybe not. The problem is, all of these warm and fuzzy feelings of security are cuddled up to a body that won't be able to go the distance. How comforting is it that all these great qualities are tied to a man who might as well wear a "Future Heart-Disease Victim" T-shirt? Not. Comforting. At. All. 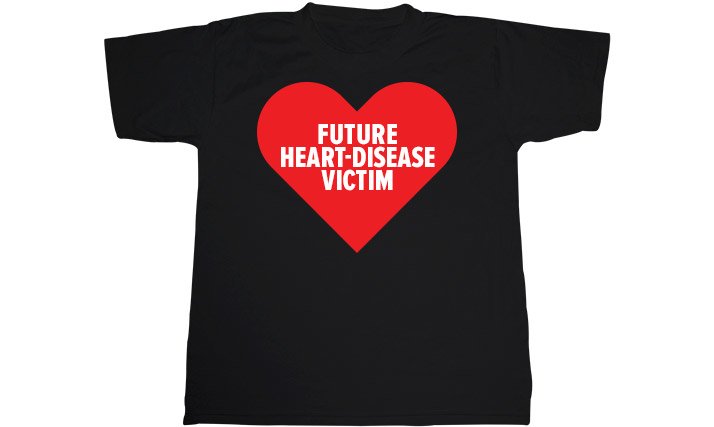 Don't get me wrong: I don't think every guy should have—or even crave—a six-pack, but I also don't think it's unreasonable to take care of yourself, pursue physical activities, indulge in moderation, and think about your future health. After all, if you're a dad with a Dad Bod, then your family deserves your absolute best—today, tomorrow, and in 10 years.

I get that some guys might be ecstatic that the Dad Bod seems to be hotter than the latest trend on Twitter—lifting a beer is way easier than lifting weights, after all—but before you ditch your gym membership for the Bacon of the Month Club, think about the years to come. I know I speak for all women who appreciate all types of men: We love you, and we really want you and your bod around for a long, long time. So please, if you sexy men love us, too, put down the nachos, cut back on the beer, and do whatever it takes to turn that Dad Bod into a Healthy Bod.

Stephanie Donaldson is a freelance writer living in North Carolina.