Weighty Issues: How To Change Your Relationship With The Scale

Although the scale is a useful tool, it can also be a great enemy. Don't be caught fighting a constant war. Find out what to do about your bad relationship with the scale.

Over the course of 20 years and a dozen or so trainers, I came to hate enforced weekly weigh-ins. I was always filled with dread before I begrudgingly set foot on the scale, knowing that my self-worth and mood for the entire week hung in the balance.

On the rare days I lost weight, I felt elated. Most of the time, though, I either gained weight or hit a plateau; and on those days, in my mind, I became a "fat failure," even if I thought I looked amazing in the mirror. I would let the scale distort my self-perception, leading me down a dangerous path of self-loathing and depression.

In an attempt to lower my stubborn scale readings, my trainer adjusted my program on a weekly basis. Usually this meant more cardio and fewer calories. Unfortunately, these weekly changes seldom achieved their desired effect. What did result was chronic irritability, depression, disordered eating, and exercise obsession.

Fitness, something I used to adore, became something I abhorred. I believed that if only I could lose the weight, I would be happy. And I was anything but.

A Big Weight off My Shoulders

After enduring this for a year, I finally hit rock bottom. I just couldn't do it anymore. So I did some research and implemented the following changes: I put an end to the mandatory weigh-ins, the two-hour daily cardio sessions, and the severely restricted diet that failed me for 52 solid weeks. I replaced them with my mirror; 20-minute, high-intensity home workouts; and intermittent fasting.

Guess what happened next? I lost all the weight, regained my sanity, started finding pleasure in fitness again, reestablished a healthy relationship with food, and once again became the happy Sara my family used to know and love.

Through this experience, I learned that a cookie-cutter approach does not exist. What works for one person may not work for another. But no one should become a slave to numbers on a scale. Curious as to whether I was alone in this battle, I asked some fellow fitness personalities about their relationship with the scale. Here's what they had to say:

What has been your personal relationship with the scale? Has it helped or hindered your bodybuilding efforts? Has it impacted your mood or self-perception?

Dr. Kwiatkowski: I do not own a scale, and have not for decades. When I was participating in drug-free bodybuilding competitions, I used a combination of the scale at the health club and body-fat measurements to assess progress.

Although I know better, I find that when I do step on a scale—at the doctor's office for example—it can affect my self-perception. I'm 5-foot-4, and my weight usually sounds high to me, even though I carry more muscle than the average woman. After visits to the doctor's office, I have to get centered and remind myself that my body composition is much different than that of an average woman. 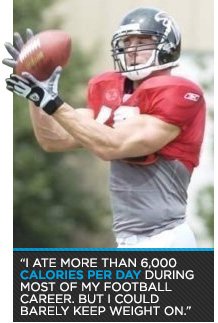 Joe Donnelly: When I played college football, size was everything. At my position, I had to constantly battle guys who were 40-50 pounds heavier than me. So five pounds of body weight absolutely made a difference in my ability to block, sustain blocks, and take a pounding game after game. I'd eat more than 6,000 calories per day during most of my college career. But I could barely keep weight on.

If I had a day of poor eating, I would wake up easily 5-7 pounds lighter. My position coach forced me to weigh before and after every practice as well as after team dinner in the evenings. It was a constant battle, but completely necessary.

As a fitness model, I've also been too concerned with the scale. The first cover I ever shot was for Muscle and Fitness. For that shoot, I starved myself down to 219. I obsessed over the scale and thought I needed to be lighter, smaller, and less like a football player. But that was years ago. The last cover I shot was for Fitness RX and I was 240. Hands down, I look better at 240 than I did at 219.

Ingrid Romero: When I was a teenager, I had an eating disorder and was obsessed with the scale. I would weigh myself multiple times a day and beat myself over my weight. Then, when I was about nineteen years old, I put on a lot of weight. Watching the scale numbers go continually up put me in a bad mood. I had no idea about fitness or how to live a healthy lifestyle.

It wasn't until I started training hard and learned about nutrition and fitness that I understood that the number on the scale meant nothing. After that lesson, I stopped weighing myself every morning and stopped letting that number control me. I learned that health is more about how you look and feel than the number on the scale.

Miryah Jade Scott: In the past, that silly number on the scale has had a tremendous amount of power over my mood, confidence, and self-worth. So I took the power away and rarely look at it anymore.

With that said, knowing your weight is sometimes necessary if you're keeping close track of your muscle gains or body fat percentage for a competition. If that number negatively affects your mental and emotional well-being, don't look at it, and tell the person doing the measurements not to tell you. When you're closer to your goals and feel ready to see or hear your weight, then you can make the decision. 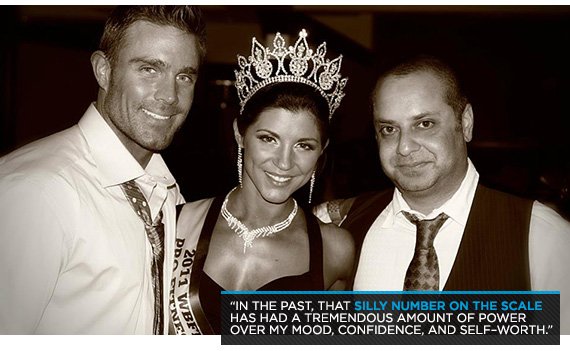 Besides the scale, what alternative outcome measuring tool would you suggest?

Dr. Kwiatkowski: A better alternative to the scale would be the mirror and how your clothes fit. Because I know how I react to the scale, I only use one if I feel like my clothes fit differently. I have a pretty good idea of which weight ranges feel best for me. If I feel like I'm a bit above that range, then I may take a closer look at my diet and make some changes. I can't do more physical activity than I already do and still maintain a day job, so manipulating my diet is my only means of tweaking my physique. However, I'm over 50 now. Sometimes I feel frustrated, because it takes longer to see results from my diet modifications than it did in my younger days.

Joe Donnelly: I don't use a scale. The scale can be inaccurate because weight can fluctuate from simple things like humid weather and a high-sodium meal. We can also drop weight from lack of fluids rather than fat. Use monthly, accurate body fat measurements and focus on self-improvement. Toss the scale and use a mirror.

Ingrid Romero: Instead of the scale, measure your health by how you look and feel. How do your clothes fit? How do they look? This might be hard for some people because they don't see themselves accurately. I was one of those people. But, the more in-shape I got, the more control I had over my body and my mind. I could look in the mirror and feel great. Now, I never step on a scale. Even when I'm competing I only measure progress through body fat measurements.

Miryah Jade Scott: I don't think I can pick just one. There are many alternative ways to measure your health and fitness. To gauge my progress, I pay attention to how my clothes fit, compliments from others, and what my trainer says. I tend to be my own worst critic, so seeing myself through someone else's eyes helps to temper that.

Don't give so much credence to your weight. There are better ways to measure progress:

So, Should I Throw Away My Scale?

That depends entirely on your relationship with it. If you feel dread before you step on a scale, don't use it as an outcome measuring tool on a regular basis. I only use the scale for a few weeks out of the year when I am preparing for a competition, photo shoot, or guest appearance. If you're like me, weighing everyday creates too much stress and puts too much emphasis on weight loss.

Instead of using the scale as the ultimate measuring tool, grade your success instead on how you feel. If you're eating healthy and exercising, you shouldn't worry too much about 10 pounds.