Train Like An Athlete: Four Ways To Build An Athletic Physique

You don't have to be preparing for the Olympics to train for more athleticism. Take what you're doing now and make it more explosive, powerful, and effective!

Do you ever watch elite athletes and wonder what you can learn from the way they train? Maybe you're tired of the bodybuilding grind—the long walks on the treadmill or stepmill, following the same split routine for weeks on end. Or maybe you used to play sports in high school or college, and you wonder why you don't feel as fast and agile as you did then.

Don't worry, I'm not about to throw a bunch of random workouts full of Olympic lifts at you. I'm not even going to tell you to go play more sports. I'm simply going to help you take the work you're doing now and make it more athletic. I believe that you can train for physique goals while also developing athletic qualities like speed, power, agility, and balance. These goals should complement each other perfectly, and when they do, it usually takes your body to the next level.

Don't be content with being big or cut. Follow these four rules and build an athletic physique! 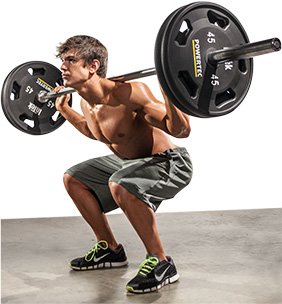 "Pick your biggest lift. On the concentric phase, lift that weight as quickly as possible. Then lower the weight, slow and controlled, over 3-4 seconds. Pause for 1 second at the bottom, and explode it back up again."

Train explosive—what does that mean? Box jumps and sprinting? Those are definitely explosive, but they're not what I'm talking about. I'm talking about the tempo of your main lifts. Slow, controlled repetitions are a great way to keep you safe, maximize tension on the muscle, and stimulate growth, but explosive training can benefit both your lifting and your athleticism.

Try this: Pick your biggest lift, whether it's the bench press, squat, deadlift, or something else. Use a little less weight than you're used to at first; you'll catch up soon enough. Now, on the concentric phase, lift that weight as quickly as possible. Then lower the weight, slow and controlled, over 3-4 seconds. Pause for 1 second at the bottom, and explode it back up again.

This will begin to develop your power, which is the ability to move weight quickly. If you can teach your muscles to fire quickly, not only will you shock them by mixing up the tempo, you'll also be able to lift more weight once you can attack heavy weight with the same ferocity.

You may love fasted cardio, incline walks on a treadmill after your workouts, or nothing at all if you are bulking (or lazy). That's all well and good, but what normally gets called "cardio" is just the tip of the iceberg, and if you're looking to increase your athleticism, slow and steady won't win the race.

We've all heard of high-intensity interval training by now, and for a good reason: It works. It will greatly improve your VO2 max, which for our purposes here is your ability to perform at high levels without fatiguing. It will help you move faster in sports, if they're your thing. And perhaps HIIT's most talked-about benefit: It can get you absolutely shredded, much faster than low-intensity steady-state cardio.

I like hill sprints, sled pushes, treadmill interval sprints, and rower sprints. Try out different methods, find ones you are able to do with whatever equipment you have access to, and throw in 15-20 minutes of interval work once or twice per week to start. You can add more days if you want, but ease into it, because it can tax your nervous system.

3
Train the Core for Action

I'll spare you the "abs are made in the kitchen" speech for now. It's true, but it's only part of the story. Nutrition plays a huge part in getting lean enough to see your abs, but to build an athletic physique, you also need to select exercises that train your core for action, not just for tone. 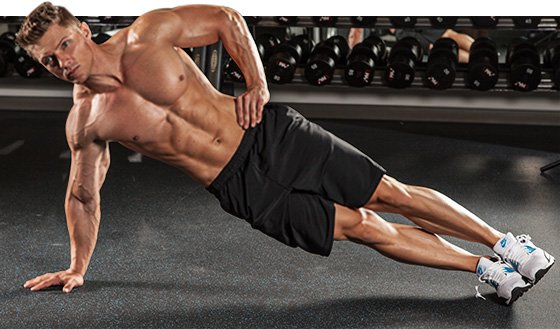 Build your core work around movements like planks, side planks, bird dogs, cable or medicine ball chops, and Pallof presses.

While crunches are great for folding you up, rounding your lower back, and flexing your neck, none of those are that useful for an athlete. The core muscles brace the spine, help us stand up straight in awkward stances, rotate safely, create force and stability across the body, and resist forces that try to move us. If those functions sound like factors that could help you stand out in competition, you're right.

Build your core work around movements like planks, side planks, bird dogs, cable or medicine ball chops, and Pallof presses. These will benefit your body much more than crunches and sit-ups. And once you're lean enough, they'll give you enough ab muscle to show off.

Big, strong chests and quads are a dime a dozen. Athletic performance comes from the parts of the body you can't see in the mirror: Your back, hamstrings, and glutes. These are muscles that announce someone who can back up their looks with speed and power in any setting.

A good rule of thumb is to do twice as much pulling as you do pushing. Add up how many sets of chest, shoulders, and quads you do, and double that set number for your lats, hamstrings, and glutes. Especially hammer that upper back if you do a lot of benching. Your shoulders will thank me later.

Double may seem like a lot, but it's actually conservative. Erring in the other direction can contribute to serious issues over time, including back pain, neck pain, and injured shoulders and knees. Almost all of us are prone to bad posture, especially people who sit frequently throughout the day; over-prioritizing the front of your body in training will only make this worse. 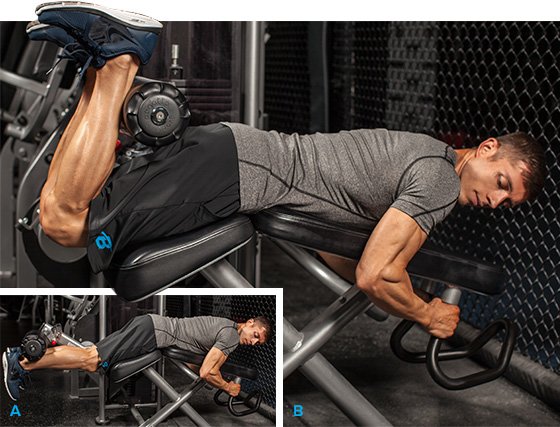 Forget the hulking gorilla pose. An athletic physique has good posture, a strong upper back, and glutes and hamstrings that make skinny jeans curse the day they were sewn. Some of my favorite exercises to build this foundation are pull-ups, rowing variations, deadlifts, hamstring curls, hip thrusts, and face pulls. All of these exercises should be staples in your program. Learn to perform them properly, and they will reward you immensely!

Now to take a good hard look at your program. Are you building an athlete or just an immobile action figure? If it's the latter, make a few changes and get to work!

Matt discovered weight training while in school and fell in love with it. Now he hopes to pass his knowledge and passion of exercise to others.