Stephanie spiraled into mental and physical illness after a nightmarish trauma in boot camp. Now, five years later, she's fitter than ever. 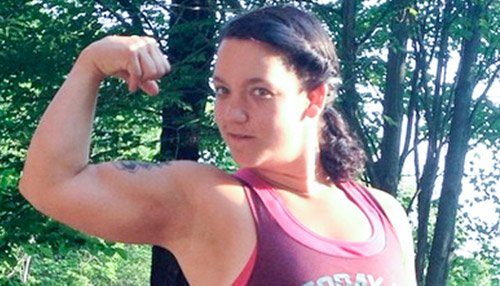 Stephanie Bennett was a star recruit in basic training for the Marines, but an unexpected betrayal by one of her own sent her skittering off course. After escaping from a violent marriage, she had a breakdown. She was in and out of hospitals, taking piles of pills, and feeling worse than ever.

Finally, when her ailing mental health and dramatic weight gain started to rob her of her energy, her family, and even her memories, she gritted her teeth and turned herself around. After five years, Stephanie is 160 pounds lighter and 100 percent improved—a fearless, Schwarzenegger-styled circuit-training ace.

Here is her story, in her own words.

You say you started out at 305 pounds. How did you get there?

Well, I didn't exactly "start out" at 305. When I was in high school, I was actually pretty fit; I played soccer and ran track, but I wasn't a superstar. I pushed myself to get good grades and graduated early so I could leave for the Marine Corps.

Everything was going great. I rocked boot camp, and I was even meritoriously promoted before I graduated. I loved my time in the Corps, and I'm proud that I served. But my time in service was cut short when I was sexually assaulted by one of my own "brothers"—a fellow Marine.

While the perpetrator was given a court-martial and seven years in military prison—what they call "the brig"—no help was given to me. I had just turned 18, started drinking, and got in trouble. I was trying to get kicked out because I was surrounded by people wearing the same uniform as my attacker. Even I wore the same uniform. I couldn't take it anymore. I mention this for two reasons: one, because sexual assault is a huge problem in the military, and two, because this trauma started my long and painful downward spiral. 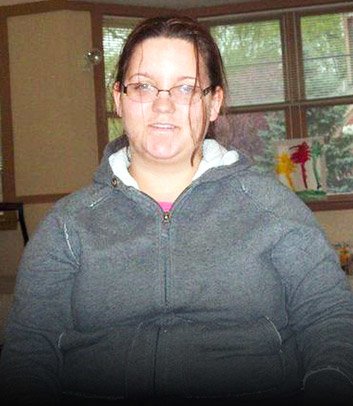 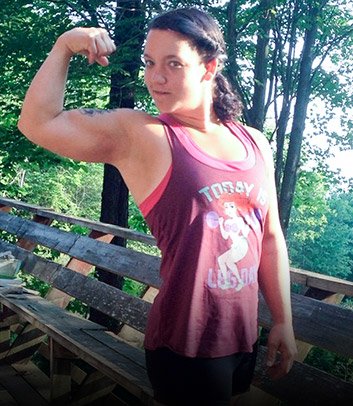 The start of the tailspin was a violent, abusive relationship that I jumped into after leaving the military. Taking my little boy with me, I fled to a domestic violence shelter in 2007. I tried to get through licensed nursing assistant school (LNA), but this was freaking hard to do while taking 14 different medications: Seroquel, Lithium, Zoloft, Effexor, Welbutrin, Ativan, Trazadone, Klonopin, Abilify, Ambien, Metformin... the list goes on.

Aside from making me a complete zombie, the medications made me hungry. I ate, and ate, and ate. I'd feel awful for gaining weight, so I'd eat some more. I tried to hike, but I couldn't keep it up for long. I became diabetic, had eyesight issues related to the diabetes, and had significant memory-loss problems. I lost several years in what I was told was a "fugue state." In 2010, I was diagnosed with PTSD. In 2012, I became a so-called "unemployable, disabled veteran."

I hit rock bottom when I had to sign over the rights to my son. This was when I knew I had to do something.

So I did. I flushed everything. A lot of the medication I was on was highly addicting, and I just stopped cold turkey. For weeks, because of the withdrawal, I couldn't think straight, I couldn't write without shaking, and I couldn't talk without stuttering. I stopped smoking cigarettes. I started watching documentaries on GMOs and the problems with the American diet. (I recommend "Food, Inc.") I threw away unhealthy food and got educated about Monsanto, corn syrup, and chemicals that are put in food to make us eat more and more. Over the next five years, I slowly became myself.

[Editor's note: Bodybuilding.com does not recommend abruptly discontinuing the use of prescription medications without the direct supervision and cooperation of your physician. Physical withdrawal symptoms can differ significantly by the type of prescription medication that is being used, how much is consumed, and the period of time used. We recommend you consult with your physician to determine the best treatment plan possible.]

What were your first steps?

Before I started exercising and eating right, I tried a lot of ridiculous bullshit. One program involved taking injections, bingeing on junk for three days, and then taking in only 500 calories per day for the next 52 days. Yeah right! Next I tried caffeine pills—not smart. I tried bingeing and purging, but I couldn't get over all the money I was literally flushing down the toilet. No surprise—none of these things worked.

Eventually, I started the old-fashioned method of eating less and exercising. The weight came off really slowly. For a long time, I couldn't do full squats because my rolls got in the way. I couldn't do crunches for the same reason. I couldn't go for a walk without feeling nasty, sticky, and sweaty. I was disgusted with myself.

But you managed to pull through. How did you stay afloat? 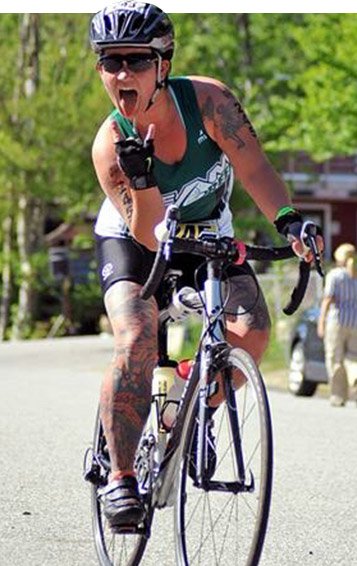 I watch YouTube compilations of fit people saying really encouraging things, and every time I look in the mirror, I say something positive to myself.

Three things kept me going. The first was repetition. When I was in an abusive relationship, I was told every day that I was a piece of crap, and I started to believe it. That's the power of repetition: I looked in the mirror and could only see my flaws. Now, I use repetition to heal myself from the inside out.

I watch YouTube compilations of fit people saying really encouraging things, and every time I look in the mirror, I say something positive to myself.

The second reason I was able to pull through was community. After losing about 50 pounds, I moved to Utah. There, I started going to body pump and spin classes. At these classes, I met a group of about 12 gung-ho fitness-minded people who changed my life.

One of these people, Mike, is 67 years old. If you didn't know that, you would think he was 40. I met him at the gym I in Salt Lake City, and one day he came to me and asked if I wanted to do a 5K, I said sure, and he replied, "Great, because I already registered you and your son." That's the kind of guy Mike is. He even loaned bikes to people who didn't have them, just so they could be active.

After I lost about 100 pounds, Mike's bike-loaning habit gave me an idea: Do a triathlon! I came in last—because I doggy-paddled the entire swim—but I was smiling the whole time. Why? I felt like all the people cheering were cheering for me. I knew how far I had come to get to that point. How could I not enjoy it?

What's the most rewarding part of getting fit?

Right now is the biggest reward. Telling my story—this is what I've been working for. I've known all along how fitness has helped me, and I'm talking to the VA about becoming a personal trainer. I want to get my bachelor's degree in exercise science. I want to teach people how exercise can change their lives. If you've been fit your entire life, it's hard to understand.

I should note that I lost the first 80 pounds in a year, and the next 80 over the next two years. It's been up and down, not steady progress. A lot of people start losing weight and just plateau. It's important to keep on going, no matter what the scale says.

Any life hacks for people who want to eat less?

Don't shop for food when you're hungry. Drink nothing but water—and plenty of it. Eat loads of veggies before main meals. Try eating off of blue plates. The color blue calms the appetite. Red, orange, and yellow, on the other hand, stimulate the appetite. Ever wonder why McDonald's chose red and yellow for their sign? Now you know.