Health and fitness enthusiasts have a tendency to think and talk in opposites. A food is healthy or it isn't. You made a lift or you missed it. You cut or bulk, work or rest, and do compound or isolation moves, concentrically or eccentrically, with good form or bad. Even if those particular pairs don't ring true for you, I'm sure I wouldn't have to dig too far to find ones that do. 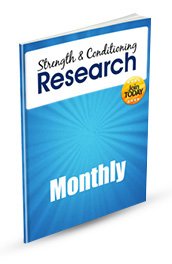 In this month's installment, I'm going to look at three brand-new studies that delve deep into three of strength training's most cherished dualities to see if they're all they're cracked up to be. Is a full range of motion better than partial? Do you need to string a barbed-wire fence between your cardio and your strength routines? And finally, an important study co-authored by low back pain expert Stuart McGill investigates whether increasing your hip mobility by stretching actually makes you more mobile during functional movements such as lunges or squats.

This is science you can put into action immediately, which is what my colleague Bret Contreras and I had in mind when we started our journal, Strength and Conditioning Research. So let's dive into it.

It's an age-old question, and one that Internet trolls love to bring up whenever possible in the comments below PR vids on Youtube: Are partial squats with heavier weights less effective than parallel squats with lighter weights? While many studies have explored the ways that factors like volume, frequency, and loading effect muscular hypertrophy, relatively few have investigated the effect of range of motion on muscular size.

McMahon and Pearson tackled the depth question by investigating the effects of eight weeks of resistance training on the strength, muscle architecture, and subcutaneous fat content of the vastus lateralis muscle. They used two different training protocols, one with a knee angle of 50 degrees—a relatively short range of motion—and the other with a longer knee angle of 90 degrees. For the study, they recruited 26 "recreationally active" but untrained subjects, 14 males and 12 females, and assigned them to either group. Both groups performed resistance training workouts three times per week using a combination of free weights (squat), machines (leg press and leg extension) and their own bodyweight. The exercises were performed at 80 percent of 1RM in each case, and the loads were increased every two weeks. 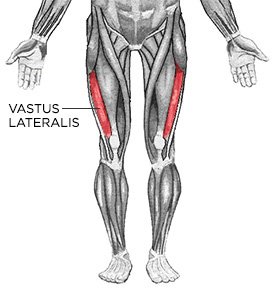 In respect to muscular size gains, the researchers found that vastus lateralis cross-sectional area increased significantly in both training groups at all sites measured. They noted that there was a non-significant trend for the long-range-of-motion group to display greater increases in anatomical cross-sectional area at all sites in comparison with the short range of motion group. This difference was also significant at 75 percent of femur length. Both groups experienced reductions in fat content, but without differences between the groups.

Strength, or isometric torque production, is where the researchers saw the most marked differences between the groups. In respect to strength gains, the researchers found that the short-range-of-motion group significantly increased isometric torque at only 50, 60, 65 and 70 degrees, while the long-range-of-motion group increased isometric torque production at all ranges of motion. Likewise, the calculations of external torque, based on the increases in knee extension load in the two groups, suggested that the long-ROM group improved by 7 percent more than the short-ROM group.

The researchers therefore concluded that muscular strength and size improvements are greater when range of motion is greater, and they proposed that athletes should not reduce range of motion in order to use bigger loads.

The small sample size in the study did not allow for observation of differences in anatomical cross-sectional area at different points along the muscle. However, it does suggest that greater ranges of motion are generally better than partial ranges of motion for strength and size gains.

2 / Does Cardio Impede the Effects of Weight Training?

Skeletal muscle is adaptive to the stimuli to which it is exposed. However, the adaptations brought about by resistance and endurance work are qualitatively different. The former leads to an increase in things like muscle cross-sectional area and improved capacity for force production. The latter's adaptations include increased size and amount of mitochondria, as well as increased development of blood capillaries. This has led many fitness professionals to argue that these are fundamentally conflicting stimuli, and as such, adding cardio to a strength-training routine can only serve to reduce its effectiveness.

One of the main arguments for cardio "interfering" with strength training gains is that the molecular signaling pathways for the two processes are thought to be mutually exclusive. It is believed that strength training adaptations involve the mTORC1 pathway; cardio adaptations involve the PGC-1? pathway; and the AMPK enzyme switches between the two pathways. This would mean that that signaling along one pathway stops signaling along the other pathway. 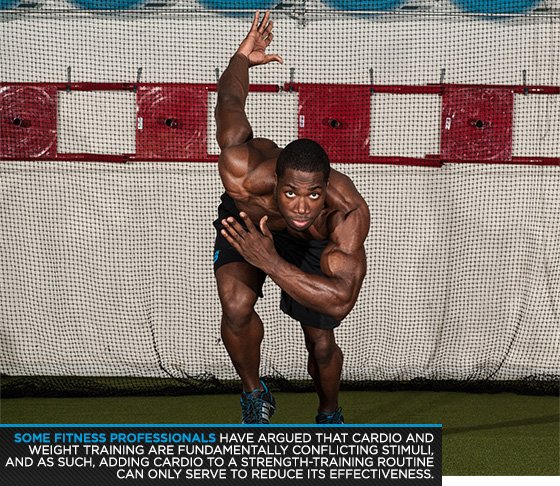 However, the research is not entirely supportive of this view. Wilson et al.1 performed a systematic review and concluded that combined strength and cardio training programs do not produce significantly lower gains in strength or size than strength-only programs. And Mikkola et al.2 reported that a combined strength and cardio training program actually led to greater size gains than a strength-only program.

Apro? et al. investigated whether a combined strength and cardio training workout would lead to reduced mTORC1 signaling in comparison with a strength-only workout. For this study, they recruited 10 moderately trained male subjects who had been performing resistance exercise 2-3 times per week and endurance exercise 1-2 times per week for the last 6 months. The subjects performed two trials, one involving a strength-only workout and the other involving a combined workout. The strength workout involved a leg press exercise for 4 sets of 8-10 reps at 85 percent of 1 RM, 4 sets of 10-12 repetitions at 75 percent of 1 RM and 2 sets of as many rounds as possible at 65 percent of 1 RM with 3 minutes of rest between each set. The cardio part of the combined workout involved 30 minutes of stationary cycling at 70 percent of VO2-max.

The researchers reported that there was no significant difference in molecular signaling along the mTORC1 pathway between trials. They concluded that cardio performed after strength training does not blunt muscular hypertrophy-related mTORC1 pathway signaling.

This study was limited in that it was an acute test of molecular signaling, and it did not report on actual increases in muscle mass that occurred as a result of the two different programs. However, other studies have shown that cardio does not interfere with strength and size gains and may actually have a positive effect on hypertrophy. This suggests that weightlifters may be able to make use of certain types of low-impact cardio such as cycling after strength training workouts without fear that it will impede their muscular gains.

Many physical therapists and fitness professionals recommend improving hip mobility through static stretching, core exercise, or manual therapy. This recommendation is based on the belief that developing hip mobility in these ways will both decrease injury risk, and transfer to increased hip flexion or extension range of motion during functional movements such as squats and lunges.

Moreside and McGill investigated whether improvements in hip passive range of motion would in fact result in alterations to hip and spine motion during functional movements. They identified 24 subjects with small hip range of motion and carried out several interventions, including static stretching, to increase their hip mobility. Having increased their hip mobility, they measured changes in their hip range of motion during active hip extension in four dynamic activities: while standing upright, performing lunges, a standing "twist-and-reach" maneuver, and elliptical trainer exercise.

They therefore concluded that improvements in hip mobility as a result of static stretching and other passive methods do not necessarily lead to changes in hip range of motion during functional movements.

The researchers didn't determine a training method that succeeded to increase range of motion usage during the dynamic activities, so it is difficult to recommend any positive action as a result of the study. However, the researchers suggested that movement practice and re-patterning are probably the missing piece of the puzzle.

When lifters identify a lack of hip mobility during a key exercise, such as a squat or lunge, it seems likely that it may not be sufficient to rely upon passive methods such as stretching to restore proper movement. Rather, movement practice with bodyweight may be a better option to improve range of motion in a way that will translate to exercise under a load.