Carbohydrates are your energy food and your source to recuperation. They are your primary source of energy or fuel at 1,600 calories per pound. Carbohydrates yield 4 calories per gram. Carbs come in two forms: simple and complex.

Carbohydrates are your energy food and your source to recuperation. They are your primary source of energy or fuel at 1,600 calories per pound. Carbohydrates yield 4 calories per gram. Carbs come in two forms: simple and complex. Simple for quick energy like fruit and juice!

Complex carbs are used for timed-released and sustained energy. Starch, cereals or vegetables are good sources of complex carbs and are your ideal source. Complex carbs make you feel satisfied or full after a meal.

Refined sugar (a simple carbohydrate) should be avoided for four reasons. One, it decreases or slows down the body's ability to burn fat because it interferes with fat metabolism and may contribute to fat gain. Two, it decreases the body's energy level needed for prolonged intense activity.

For muscle gain your post-workout meal is the most important meal of the day. Simple (fruit) carbs first must be consumed 30 minutes after your workout, followed by complex (starch) carbs 1 to 2 hours after. This aids in recuperation, which is a very important aspect for getting fitter and building bigger muscles quickly.

Simple carbs act as an electrolyte to replace body fluids that were lost during a hard intense workout because they are loaded with natural sugars and potassium. It is your "window of opportunity" making up at least 50% of your results that are initiated for effecting body composition change, which takes place "outside the gym." Refer to my other article "Recuperation and Growth."

After you've stimulated muscle growth in the gym get home and drink a glass of orange juice high in potassium. Mix it with some diet Squirt, 7-Up or Sprite for that citrus taste. It's like an electrolyte because it really gives me a surge of energy (loaded with natural sugars and potassium).

Maybe have a quarter to a half cup of raisins. Every kind of dried fruit is very concentrated, loaded with carbs and potassium. Other kinds of fruit to eat are bananas, grapefruit or orange. 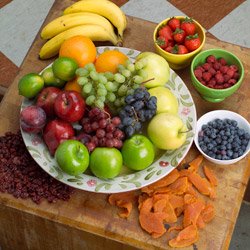 During the off-season I probably consume around 100 grams of simple (fruit or juice) carbs after my workout. But be cautious of dried fruit. Don't eat too many/much (for me raisins) at one time because they are rich in carbs and can add unwanted fat to your body in a very short time!

I experienced this one time while living in the dormitory during my freshman year at college. True. Then I lost the fat days after. Too many carbs can get you fat, especially if your energy expenditure is less than your energy consumption!

It may be argued that, "Carbs without protein immediately after a workout drives insulin levels up, and decreases glucagon. When the hypothalamus senses too much insulin and not enough glucagon, it will not release adequate amounts of growth hormone releasing hormone (GHRH)."

It is true that the ingestion of a carbohydrate can elevate insulin levels. However, it is the level of glucose that tells the body how to balance insulin and glucagon, not the level of the hormones themselves.

Fructose would not cause a "spike" in insulin levels. In fact fructose converts to glucose so slowly (low on the glycemic index) that it does not elicit an insulin response. The body releasing "adequate" amounts of GHRH will be different in every human, and different each time.

Also, adequate should be defined. Perhaps in an individual at a specific time the levels may not be maximum, but so what. GH is only at its highest levels 2 to 4 hours before waking up in the morning, assuming the person got enough REM (Rapid Eye Movement) or "dream" sleep. 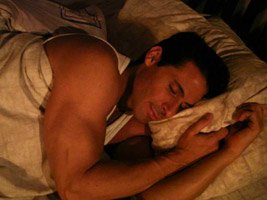 Click Image To Enlarge.
GH Is At Its Highest Levels 2-4 Hours
Before Waking Up in The Morning.

One hour to an hour and a half after your workout, eat a protein and complex carb meal. Eating complex carbs with protein is excellent, since they are protein-sparing. This means they work well together.

Eating immediately after working out does two important things. One, it helps the body to recover quickly, which is needed for muscle growth because of tissue repairs and for replacing lost glycogen in the muscles. And two, it helps to maintain your electrolyte balance that aids in muscle growth.

When you help your body recover from the stress imposed upon it (exercise) by ingesting the proper nutrients at the right time within the "window of opportunity" the quicker you will be able to effect body composition change (gain muscle, lose fat or both). You will automatically help the body "bounce back" and you will get stronger, bigger or fitter in less time.

Randy Herring is a certified personal trainer with over 20 years experience.