Powerlifter To Bodybuilder? That's A Kroc!

What happens when a massive powerlifter transforms into a ripped bodybuilder? Matt Kroc, that's what! He's shredded, he's strong, and he's a total badass.

Since then he has moved on from powerlifting to bodybuilding. Kroc is one of those dudes who can't just do something for fun; he has to do everything full-bore. He's on a mission to be a pro bodybuilder and in this interview, he openly shares his diet and training information. 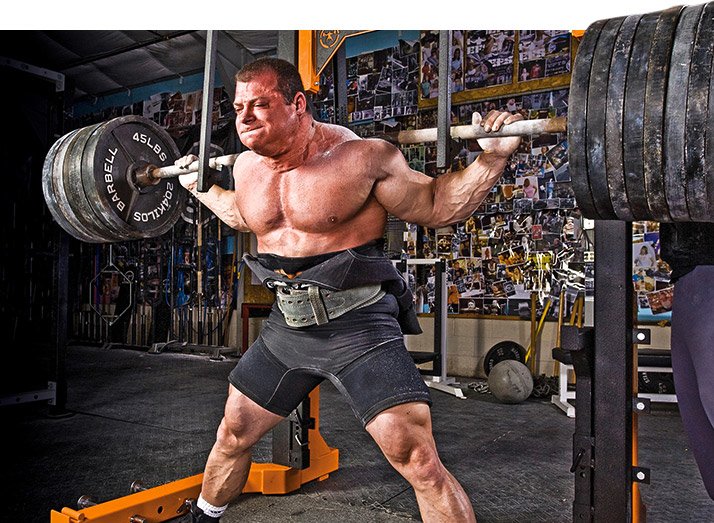 Kroc is one of those dudes who can't just do something for fun: He has to do everything full-bore.
Q

What drove you to switch from powerlifting to bodybuilding?

I needed a new challenge. After finally getting the all-time total record at 220, I experienced a letdown and felt like I needed something more difficult to go after.

My one-rep maxes in the big three (squat, bench press and deadlift) are down a bit, but overall my strength is still on the same level. It wouldn't take much for me to get my strength to PR (personal record) levels if I chose to focus exclusively on powerlifting.

How do you think concentration curls would affect your squat?

Concentration curls are the absolute base of any great training routine. Without them, you might as well not even set foot in the gym.

Would you eat differently now if you were powerlifting, and why?

Definitely. Eating like a bodybuilder has made me realize just how important and how much difference a perfect diet can make over a decent one. The vast majority of powerlifters would benefit greatly by putting more effort into their nutrition. 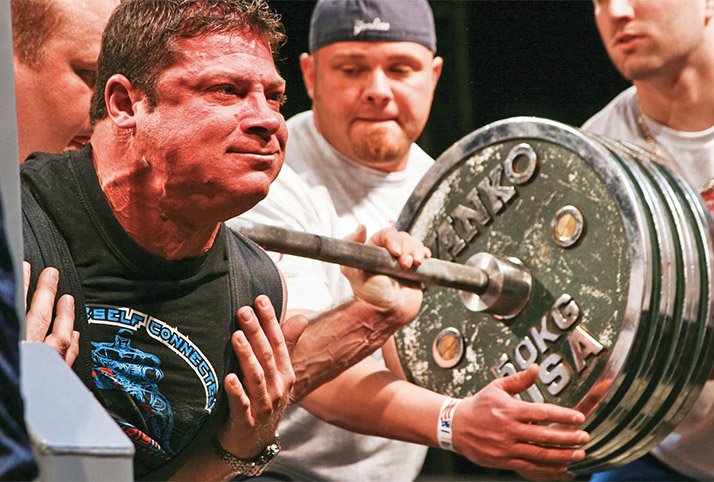 The vast majority of powerlifters would benefit greatly by putting more effort into their nutrition.

You used to work with Shelby Starnes. How did you ever take him seriously with those little glasses?

Whoever said I took him seriously? Ha, just kidding! Shelby helped me out a ton and he set me in the right direction—in fact, he planned my diet going into my last show. I'm grateful for the knowledge and the help he provided me with.

Tell us about your diet. What are some main things you try to focus on? Can you give us an example of a typical day on your diet in- and off-season?

Off-season is more about growth, so I increase everything but carbs and overall caloric intake more than anything else. However, the diet is still designed to keep me as lean as possible, while adding size. Pre-contest, I have used carb cycling and more of a high protein, moderate fat keto-type diet, but either way, the key to getting leaner is the adjustments you make as the diet progresses. Typically, this involves carb manipulation and increasing cardio. My food choices are similar in both modes, but the quantity of them varies a bit.

Drop this on non-training days.

Dude, do you have to crap in a bathtub after eating that much food?

Don't be ridiculous. I just pop off manhole covers and take care of business that way. 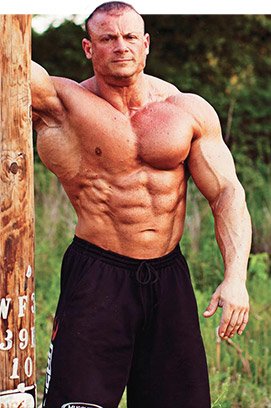 Hey, remember those crazy-ass weight loss drops you used to do back in your powerlifting days? Tell us a little about that. How did you do it and how did you keep it effective and fairly safe?

Honestly, I was just doing what had to be done regardless of what that entailed. I would sweat out all of the weight in a 24-hour period, with my largest cut being 35 pounds, when I broke the 220 all-time total record in 2009. I would turn my hotel bathroom into a steam sauna and basically spend 24 hours in there with five-minute breaks every 30 minutes. I wouldn't eat or drink anything except two pieces of toast with peanut butter at strategic times during the cut. I never slept during the night unless I was ahead of schedule. It was definitely one of the more difficult things I have done. It required a lot of mental toughness to keep going and it tested my limits of accepting pain and discomfort. To keep it safe, I typically avoided all diuretics, timed my cut to get me down and back up in as little time as possible and began replenishing all of the lost fluids and body weight as fast as possible the second I stepped off of the scale. Eating and drinking 35 pounds worth of food and liquids in one day was often as challenging as the cut itself, but absolutely necessary to perform at my best onstage.

What's the biggest thing powerlifters can learn from bodybuilders, and vice versa?

Wow, that is some great insight! Do you think your experience in the military helped prepare you for self-torture?

Definitely. While I had pushed myself hard training for football and wrestling prior to entering the Marines, it was in the Corps where I realized just how much further I could push my body. It wasn't just in a training sense; it also included sleep and food deprivation as well as the ability to endure psychological manipulation. Those lessons were instrumental in becoming the athlete and the person I am today. 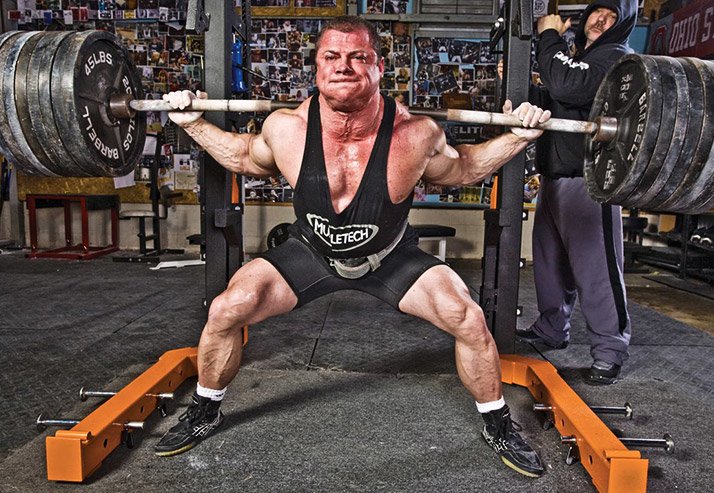 It was in the corps where I realized just how much further I could push my body.

I have seen many videos where you train so hard you just hit the ground. Do you enjoy pain and agony?

I don't enjoy the actual sensation of pain any more than anyone else, but I do find a real sense of accomplishment from pushing my body beyond the limits of what I thought I was capable. I am also an extremely competitive person and view most things in life as a competition, so I am always trying to push everything further than anyone else can.

Who shaves your back, and how do I land that gig?

My wife Lauren. And Mark, do we really need to go over that again?

What are your workouts like as a bodybuilder? What's the main goal of each training session?

My training sessions have a lot more volume now. I still train hard and heavy, but my rep ranges are often 10-20, and I rarely ever work up to heavy singles, doubles or triples. I typically pick 3-5 exercises per body part and perform several sets of each, trying to hit the muscles from multiple and varying angles. However, I still prefer the basic compound movements over isolation-type exercises, and they still form the base of my training. I also incorporate a lot of techniques that drive a high volume of blood into the muscles, like dropsets, giant sets, supersets etc. The idea here is to stretch the fascia around the muscle tissue, thus allowing more room for growth.

The goal of each training session is to facilitate growth. Unlike powerlifting, there really aren't specific numbers or targets for each training session, but I do plan things ahead of time and know what I need to get done when I walk into the gym. Mostly, it's just putting in the work that needs to be done and being patient with the results.

What are your weakest areas and how do you plan to bring them up?

My arms, shoulders and legs were all lagging behind my chest and back when I first converted from powerlifting; this is typical with lifters coming from a primarily strength-based training program. Since then I have managed to make good progress with both my shoulders and arms, but due to a knee injury that is holding my leg training back, they are still behind. To correct this, I am trying hard to get my knee healed up so I can train my legs with the intensity and volume they need. Once the knee is ready for it, I'll hit my legs hard with tons of volume based around the basic compound movements, like squats and leg presses for quads and different types of stiff-legged deadlifting supplemented with variations of leg curls for the hamstrings. 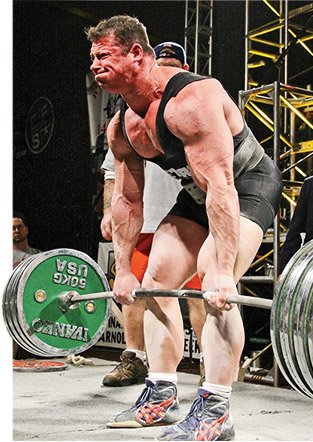 What's next for Matt Kroc?

Continue to work toward my pro card in bodybuilding. Once I achieve that, I'll reevaluate everything and go from there.

Will you ever return to powerlifting?

I don't have any plans to at the moment, as I need to focus on my bodybuilding goals 100 percent in order to achieve them, but I can tell you that I get the itch to train heavy often. I would love to get back on the platform and chase a few goals I have, like hitting a 900-pound deadlift.