The Olympia stage is a kaleidoscope of amazing bodies. Here’s what the judges are looking at in picking the winners.

If you're new to the bodybuilding community, attending a contest like the Olympia might feel like you're sitting in a meeting of NASA astrophysicists—you know that what's being discussed is out of this world, but you don't really understand what anyone's talking about.

Even if you can't make it to Vegas and are going to watch the Olympia via Bodybuilding.com's extremely convenient (and free!) webcast of the event, you'll see some things you've never experienced before.

If you aren't familiar with how competitions work, you have a couple options. You can watch, nod your head, and pretend like you know what you're doing. (In order to pull this off, you need to know words like "striated," "dry," and "symmetry.") Or, you can read this easy guide and actually learn something.

This is the main event, a contest that has conferred the world's top bodybuilding title since the 60s! After taking the Olympia, the only thing left for a bodybuilder to do is to try to do it again. Since 1965, there have only been 13 men to take the title, and only the best in the world are allowed to compete.

The Mr. Olympia (and its role in the 1974 film Pumping Iron) helped vault Arnold Schwarzenegger to superstardom.

This year, there will be three classes of bodybuilding: Women, Men 212 and under, and the Open Men. Only the Open Men will compete for the Sandow trophy.

The judges critique these athletes head to toe for muscularity, proportionality, and definition. Their overall aesthetic value is taken into consideration.

They aren't just looking for big muscles-they're looking for small joints with long, full muscle bellies. There should be a balance to the physique; one part of the body should not overshadow another.

For women, extremes in muscularity and definition are to be avoided and should be graded down. The competitors will be compared side by side in the mandatory poses, each designed to highlight the entire body.

In the second portion of the show, competitors get the opportunity to display their physiques via a choreographed routine to music of their choice. It's a really fun event to watch.

Only women compete in the Fitness event. They are different from the rest of their peers because they are judged not only on their physique, but also by their onstage demonstration of their athletic abilities. This could include gymnastics, dance, and display of their strength and flexibility in a choreographed routine. 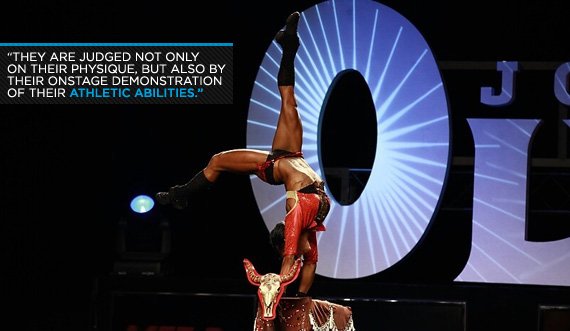 As with the bodybuilders, there is a round of side-by-side comparisons, with the women in a 2-piece bikini before they perform their routine.

Their physiques should obviously be better than Jane Doe's—unless Jane Doe works out daily and diets like a madwoman. But Fitness divas shouldn't have excessive definition or be so large that it might not be regarded as feminine.

Their overall grace and beauty are also taken into account.

In recent years, Figure has dominated female competition; many women leave bodybuilding and fitness to move into the newer discipline.

Unlike bodybuilding and fitness competitions, the athletes don't have a routine, nor do they do mandatory poses. Most competitors perform a T-Walk in a 2-piece bikini and heels. 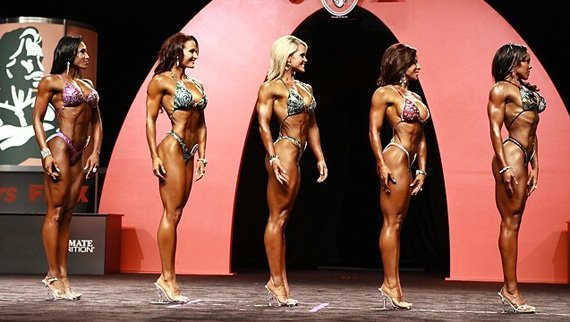 Just as in the other categories, the judges make side-by-side comparisons to determine their placings.

Unlike bodybuilding, Figure competitors won't be flexing their guns and 'mirin each other's teardrop.

They will have a semi-relaxed position, just turning to the front, side, and rear so the judges can enjoy a full view of their gorgeous physiques.

Bikini is a relatively new addition to the Olympia. 2010 was the first year the contest was held. To assess bikini competitors, judges will take the whole physique into consideration, including facial and hair beauty.

Presentation is important, as is symmetry, confidence, skin tone, and grace. The competitors will be presented in a 2-piece bikini. It should be noted that while the judges are looking for a healthy physique, the competitors shouldn't have the separation, definition, and muscularity of other physique athletes. In fact, they'll be graded down if they do.

The competition itself uses the same format as figure; the contestants are presented through the walk and are compared. They have a little more leeway with how they would like to pose, and only present the front and back. 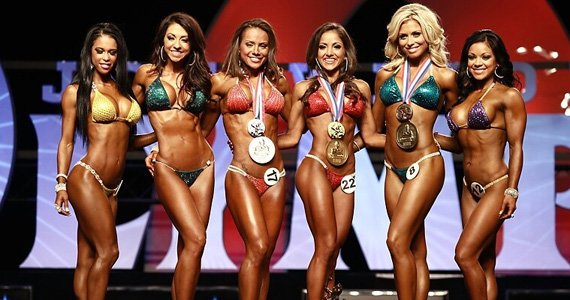 The competition is divided into two portions. It's done this way to simplify judging and make the show more interesting for spectators. The first portion is known as prejudging. Typically, this is held the morning of the contest; but for big shows like the Olympia, it is sometimes held the day before the Finals.

Prejudging takes considerable time because the judges use it to thoroughly compare all of the competitors. For bodybuilding, this consists of comparison shots in the "quarter-turns" and in the mandatory poses. Fitness competitors will conduct both their quarter turns and their routine during pre-judging as two separately-scored rounds. Bikini and Figure athletes will be compared in their own poses as well.

After the entire lineup is brought out in numerical order, the judges will move people around and bring competitors to center stage a few at a time to compare them side by side. The athletes will continue to do this until every judge can make his/her own rankings of all of the competitors.

If you're paying attention, you should be able to see who the judges are favoring based upon their new position in the lineup and who they are being compared with.

The second half of the show is the Finals. This is the portion of the show that has all of the pomp and ceremony, and it's when the awards will be presented. Usually, athletes will dress with a little more bling, makeup, etc. They are introduced by name instead of by number, and the announcer will give the audience a little biographical sketch to go with the visuals.

The highlight of the evening for bodybuilders is the chance to perform their free-posing routine. They get to choose their own music, showcase themselves however they want, and egg-on the crowd. This isn't actually scored for the men, though. Their placings come from the side-by-side comparisons.

The Fitness competitors will perform their routines-which are scored-to add to their scores from the comparison round. Figure and Bikini contestants get their moment alone onstage when they are presented via the walk, a runway-model-type presentation done to music. This portion really draws in the crowd. (For the life of me, I can't figure out why.)

After finals are conducted, the judges will tally scores from all rounds. To help reduce biased decisions, the top and bottom two scores for each contestant are thrown out. The entire class is brought back out and the top places are announced in reversed order. The champion therefore, is announced last.