Over 40 Amateur Of The Week: Susanne's Competition Comeback!

Injuries and medical problems couldn't suppress Susanne's competitive spirit. See how she grabbed heavy weight and hit the bikini stage with a bang at age 46!

How did your fitness journey begin?

I was active, thin, and lanky as a child with parents who never had weight issues. At age 10, I started dance lessons and played softball but it didn't suit me and I never got into team sports.

I joined the drill team as a high school freshman and it became my life for the next three years. At age 16, I was introduced to weightlifting when my high school sweetheart started working at Nautilus. I loved the feel after a good workout.

My weight remained between 120-130 pounds throughout my teen and young adult years. I continued weight training and started aerobic dance and Step Reebok classes. There were periods in my life during nursing school and my husband's medical residency when I couldn't afford gym memberships, but I always found time to at least cycle. I took up road racing at one point in my 20s and cycled 20 miles per day, five days per week. 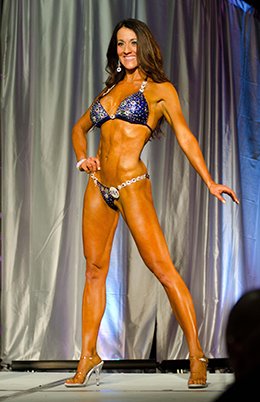 I had my first child at age 31, only gained 15 pounds, and quickly lost it. Two years later, I gained and easily lost 20 pounds after my second baby. After my kids were born, my body image issues and insecurities kicked into gear. I was never happy with my overall appearance and began cycles of binging and dieting. My weight fluctuated between 117-135 pounds. My eating habits were horrific.

My husband, an ER physician and avid weightlifter, constantly fussed about my eating habits. I refused to listen or change because I was too afraid of becoming fat. I went to the gym daily, sometimes twice daily, and did hours of cardio. Tendonitis in my left shoulder prevented me from weightlifting even with steroid injections twice annually.

My exercise regimen came to a screeching halt in 2009 when I started having severe pain in my lower back that radiated into my legs and ankles. It became so debilitating that I spent 6-8 months in bed in 2010. I could barely walk and chores became impossible. I cancelled my gym membership and all outside activities. At this point, I fell into a deep depression. I felt helpless and the doctors couldn't figure out what caused my pain. Finally, I was prescribed an anti-inflammatory that worked. At 149 pounds, I was the heaviest I had ever been.

Susanne rejuvenated her love for horses and competed in an English saddle riding show in 2013!

I wanted to lose weight so I went back to the gym determined to meet new goals. My eating habits didn't change, though, and the weight remained despite hours of cardio. My metabolism was a mess. I was sluggish, depressed, and foggy. I went to see my doctor, who did blood tests and determined that I had severe hypothyroidism. She prescribed Synthroid (thyroid replacement) and within a few weeks I felt like a new person. My metabolism improved and the weight slowly came off. I went back to the gym but injured my left shoulder which caused severe pain that requires steroid injections every six months. I've received physical therapy off and on since 2010.

In September 2012, my physical therapist suggested I start Pilates. At first, I wasn't open to it but had no options at that point. I started taking mat classes twice weekly and loved it. Pilates reshaped my body and helped me develop abs. It was incredible. I was an avid Pilates student until May 2013 when my instructor became unavailable.

I went back to weightlifting and met my workout partner Tiffany Edwards, a trainer who placed fifth at Jr. Nationals in E Class. We started working out together on a daily basis and I started seeing great improvements.

I've been reading fitness magazines for as long as I can remember. I was a huge fan of Rachel McLish when she became the first Ms. Olympia. I admired her physique and dreamt about building a strong and fit body like hers. Many years later, I finally feel the incredible changes that happen with a healthy lifestyle. 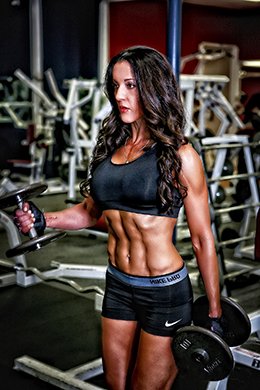 "Winning a pro card would be the pinnacle of success."

I lost my best friend of 22 years to breast cancer on February 2, 2013. Tinsley really lived out the Tim McGraw song, "Live Like You're Dying." She lived it before her diagnosis and as she was dying. In her final year, she went skydiving, mountain and redwood tree climbing, white water rafting, and sailed on a private sailboat for two weeks in the Caribbean. She was fearless in the face of death. She insisted that I keep living and reach for my dreams.

Now that I'm going for my dreams, I have no intention to ever look back. Many people contact me daily and say that I'm an inspiration to them. I want to continue serving as an example that it's never too late to dream big.

On days when I feel like skipping the gym, I think of Tinsley and it pushes me forward. I can almost hear her voice saying, "Get going Sue! You've come so far! Get your booty in the gym!" I also take into consideration the fact that I have serious longevity in my family. My grandparents died at ages of 90, 95, and 98. I want to have a strong body and sharp mind for as long as possible.

I look at my before photos and remember how far I came. I'm humbled by the people who contact me daily asking for help to get fit. I love pushing myself to improve monthly. The camaraderie in this sport is wonderful. I've met many amazing athletes backstage and love that we support each another.

My plan is to continue competing locally in the NPC and qualify for a national show. I want to compete in 2014 at the master's nationals. Winning a pro card would be the pinnacle of success. I want to encourage others to deal with the negative voices in their heads and realize that the past is the past. Today is a new day! 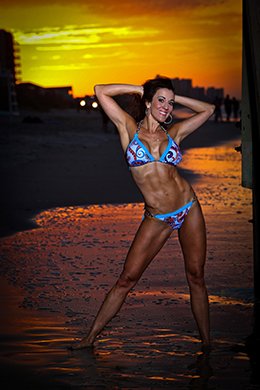 It's you versus you. Build the best body you can and be proud of what you accomplished when you step on stage. Be grateful for the changes you made no matter how you place. Fitness is a journey, not a destination. Get rid of the haters in your life. Negative people will only bring you down.

I look up to IFBB bikini pro Janet West. She didn't start competing until age 44 and earned her pro card at age 50. She kept going until she reached her goal and didn't give up. At age 52, she has the body of a 20-year-old. She inspires me to reach my goals and has personally encouraged me. I hope to join her and motivate people age 40 and older.

I love the articles and store prices that can't be beat. I'm inspired by BodySpace success stories of people who overcame so much. Rereading their stories inspires me to push harder. There are great exercise suggestions and training guides that you can use to change up your routine. I learned lots from the supplement articles. This is the best bodybuilding site on the web hands down!