Over 40 Amateur Of The Week: Look Better Than Ever At 50 Years Old!

Dean Colfax has been bodybuilding for over a decade. At age 50, he still plans to compete and continue his pursuit of perfection.

I've lived and breathed in iron from the weight room since I first hit my teenage years. My dad owned this old Weider plastic and concrete weight set along with a bench. If I remember correctly, the weight set totaled 110 pounds. He set it up in the garage and installed a pull-up bar for me as well. Looking back, my dad really helped ignite that passion and love for weight training in my early years.

When I started junior high as a fresh-faced teen, I started lifting quite obsessively. Because I had my own set of weights in the garage, I lost myself in countless thousands of reps of bench presses, hand stand push-ups, pull-ups, tricep exercises, and push-ups. When I outgrew the weights, I bought two 25-pound plates to throw onto my bench. By the time I hit my sophomore year in high school, I weighed 140 pounds and benched 190. I never looked back.

Weight lifting—and later bodybuilding—kept me healthy and, in many ways, sane. At 50, I am confident, healthy, and very strong. I can look in the mirror and be content with what I see year round. No doubt that age has laid down obstacles, but they only strengthen my resolve to stay on this path and journey I've chosen. If I were to quit, I might as well sit down in a rocking chair and give up as well; as long as I have the energy, I will continue to train. I control my appearance now; it does not control me. As long as I provide for my body, it responds favorably and appropriately. This degree of commitment takes discipline, but the rewards are far greater than the sacrifices. I will pass from this world still training in some form or another. 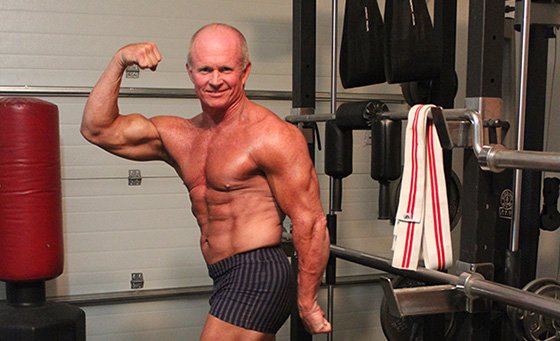 "I will pass from this world still training in some form or another."

I've been weight lifting in my garage since my first teen years at 13. I didn't discover my passion for bodybuilding until later when I competed in my first show in 2001 at the age of 38. It just clicked when I realized how much control I have over my body. To see it transform from what it was to what it has become only inspired me to push the envelope further.

If there exists an overarching goal in bodybuilding, I would say it is the pursuit of perfection. For me, it is this ongoing pursuit. Perfection can be seen an unattainable destination, to be sure, but it is one we can come close to reaching through our own will and fire.

Learn how your body ticks and how it responds to training and dieting. When it tells you something, listen to it. 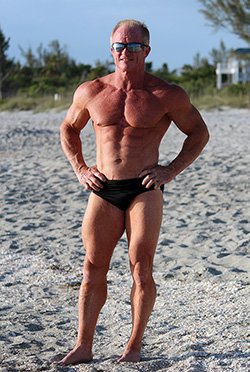 At my age, I keep it to one show a year because of the enormous strain on life that committing to a contest can create. As some of my fellow bodybuilders can attest to, family tends to deal with the mood swings that come from carb depletion just as painfully. Because my job is quite physical the job itself becomes more difficult on my body and psyche, especially with disciplined eating and training thrown atop the existing workload.

For me, competing simply isn't so much for the glory as it is the structure. Enduring months of training for a specific physical look keeps me focused and motivated. It helps my wife stick to her routine as well, since we train together. The time we spend together is quality time, and we both benefit from the results.

Bodybuilding.com is quite simply a great resource for information on workouts and competition.