Over 40 Amateur Of The Week: Julia Keirse

An injury forced Julia to abandon the tennis court for the weight room floor. See how she maintains a lean physique year-round!

I've always been a tennis player, but after undergoing shoulder surgery for a torn tendon, I switched my focus to weightlifting. I became a gym rat about three years ago, and started competing in Figure contests last year. After not placing in my first show, I was determined to do better and went on to place in the top 5 in my next five competitions. 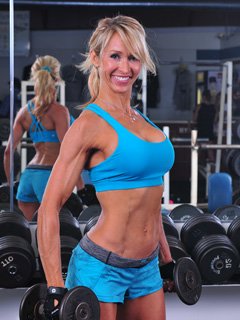 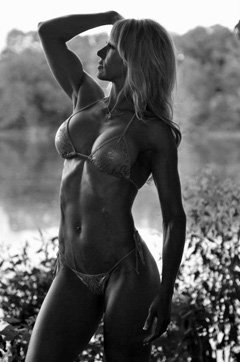 I'm addicted to exercise to the point where if I take a day off, I just don't feel good. The gym is my drug, my home away from home where I'm surrounded by like-minded friends. I also love bodybuilding because it proves a woman can be strong and still feminine, a concept I want my daughters to grow up with.

First of all, it just feels good to be healthy! Second, I want to be a role model for my daughters and all those other moms out there who think there's no hope after children. And third, who doesn't love getting compliments (especially when you're on the wrong side of 40?)

About 10 years after having kids I noticed the old bod was not as lean and mean as it used to be. There was cellulite where there was none before. I didn't feel good about myself. Getting strong and fit has changed my attitude and keeps me thinking positively. There's no doubt that competing in bodybuilding competitions (and telling people about it) is the best motivation to stay in top form.

Another motivation to start competing was my 14-year-old daughter who used to tell me, "You're old, Mom. Your dreams were dead a long time ago." 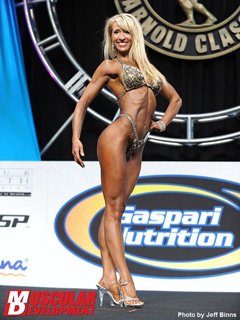 I'd like to compete in several more figure competitions and try out all the various federations to see where I fit in best. (I came close to getting my IFPA Natural Pro card in November when I came in second.) I just won first place in both Figure Open and Figure Masters in John Hansen's ABA Natural Championships in Bolingbrook, Ill. Next up is one of the NABBA shows this spring, and the NPC Jr. Nationals this June.

I'm also working on earning my personal training certification, training a couple friends and my kids, and doing every fun photo shoot I get invited to. By the time I become a real trainer, I'll have plenty of images to choose from for business cards!

If you fall off the wagon, get right back on. If this were easy, everyone would be doing it!

Erin Stern. I love her physique and the fact she gets it through clean diet and hard workouts. She appears more natural than many of the other figure pros, and I'm a huge proponent of natural bodybuilding. I think every contest should be tested.

I use BodySpace to get moral support from fellow fitness buffs, and use the progress pictures and stats to track my physique changes while preparing for a contest. I've also ordered competition supplies such as Dream Tan and Jan Tana from the Bodybuilding.com Store.