Dale is living proof that bodybuilders have no shelf life. A strict diet combined with a hardcore work ethic never gets old!

I began lifting casually in college at Kent State University in 1976, but was also an avid jogger and couldn't add size to my frame. After graduate school, I started to lift seriously and switched my focus from running to weightlifting in 1990. I continued to jog for cardio, but backed off of the everyday runs and began to bulk up. I've been lifting hard since. 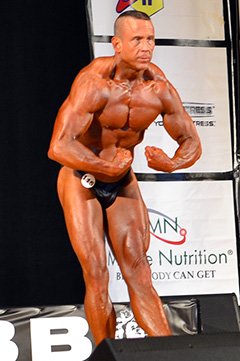 In 2000, I met Oliver McCaimbridge, who, at that time, was co-owner of TKO Sports Nutrition, an Akron area supplement store. We talked about my training goals and my focus turned to competitive bodybuilding. In 2002, I competed in my first bodybuilding competition in Monroeville, Pennsylvania, and placed fourth in the men's lightweight division. It was the catalyst I needed to pursue bodybuilding on a more serious level.

At my first competition, I was a modest 153 pounds on a 5-foot-8 frame. I lacked thickness, but made up for it by getting ripped. I dieted wrong in an effort to get the deep cuts and lost hard-earned muscle. I learned from my mistake and focused on offseason diets designed to add size and thickness. I took several years off from competing to put on clean size. When I returned to the competition stage in 2006, I was 168 pounds.

In 2010, I renewed my seriousness for training and approached Oliver McCaimbridge again, who became co-owner of Superior Fitness with his wife, Sarah. He revamped my workout routine and designed a special offseason diet to push my weight higher with the intent to step on stage as a high middleweight. In May 2012, I entered the NPC Pittsburgh at 172 pounds and placed second in the master's over 50. I returned to the Pittsburg in May 2013 and placed fourth. This minor setback motivated me to push further. I plan to continue competing and win the master's over 50 division next time.

I got into bodybuilding slowly. I lifted weights since high school, but my original goal was to stay lean and focus was running. I had a strong desire to bulk up and realized that jogging was counterproductive. It kept me lean and fit, but inhibited my growth and muscle development.

In the late 90s, I considered bodybuilding as a goal to shoot for in the gym. I'm goal oriented and knew that a competition goal would give me something to work for. This gave me the opportunity to enter a more competitive arena.

What/Who Motivates You and Inspires You?

I have a strong desire to battle Mother Nature. I'm a hard gainer and have to work hard to add size and muscle. As I get older, I'm motivated by a desire to be in the best possible shape to stave off the aging process as long as God will allow.

Currently, I train with Oliver McCaimbridge, co-owner of Superior Fitness. We work out frequently with serious competitors. It's motivating to hang with younger guys and try to keep up with them. I find inspiration in good-natured support and encouragement I get from them. We always encourage each other to achieve our best possible condition. 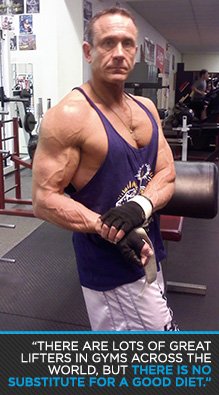 I competed in Jim Manions' NPC Pittsburgh Competition on May 4, 2013. I wasn't satisfied with my performance, so I plan to follow a strict offseason diet and training program to add additional muscle. In January 2014, I will start preparing for the spring 2014 contest season for a return to Pittsburgh and possibly 1-2 more competitions.

If working out was the most important aspect to bodybuilding, then everybody would do it. There are lots of great lifters in gyms across the world, but there is no substitute for a good diet if you plan to be a competitive bodybuilder. Stay strict with your diet and eat clean. That is the only way to bring in the cuts and definition that wins contests.

I'm impressed with the physiques of Bill Pearl and Mark Dugdale. They come from different generations of bodybuilders, but have great overall symmetry and perfect proportion. For extreme size, Branch Warren's thickness can't be beat.

Bodybuilding.com is a valuable source for motivation and training information. I refer to several of the diet and training programs to see how to change up my diet or workout routine.