Over 40 Amateur Of The Week: ''Gym'' Stands For Get Yourself Moving

Gina's outlook on life and fitness keep her built and happy. See how this sizzling bodybuilder gets stage-ready while still enjoying things like rollerblading on the beach!

The desire for a better body started where it must: in my mind. I was a young mom with three kids and didn't want to be a chubby wife wearing "mom jeans." I thought to myself that I wanted to instead feel and look as good as possible for as long as possible. Fast-forward years later, what started as a goal fully bloomed into a lifestyle. I no longer work out merely to look good; at the risk of sounding cliché, I work out to feel good. Plus, the lifestyle really is its own reward.

My interest was immediate, but my passion developed when I started training others. I truly love being part of a person's transformation process. They often start off with a frown (because I work them hard), but after a few weeks of sweat and soreness, something happens. There's a glint in their eyes because they want to be at the gym. They're excited to check the scales once a week and see their weight improve. They notice that their clothes fit better. They get to buy new clothes. They get to buy new shoes! Yeah, I know that shoe size has nothing to do with it, but a gal deserves new shoes with her new clothes and body...right? 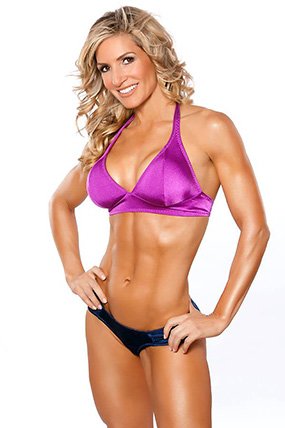 What drives you to
get better?

Not sure that I do get "better," but I sure get different. Recently I've gone through many of my old photos. My body has changed almost as often as my hair color. When I first got serious about lifting, my goal set was to add muscle to my frame. Then when I started doing bodybuilding shows, that goal morphed into becoming more cut and proportioned. Now it's more about how I feel and doing what I love. I don't look at my body and think, "Wow, that area needs work; I better get after it." I come to the gym excited to try new things and have fun. Lately, I have been practicing walking on my hands! Don't care if it makes me look better or not... it's just fun!

What aspects about the sport fascinate you?

When I did more shows, it was fascinating for me to see how the body could be manipulated for appearance. Look at a competitor on stage day and then again two weeks later: The difference is astounding. And the weight can change by up to 20 pounds! Cut carbs, cut fat, load carbs, load fat, cut sodium, load sodium, deplete water - it's really like a science experiment. Seeing how each body responds so differently is even more intriguing!

Now my fascination is about what lasts far beyond the stage lights and ever-smaller show suits. Keeping a healthy body lets me play with my grandchild without tiring. It lets me travel to see my three wonderful kids. It keeps me going when the day is too long and the demands are too many. I've learned over the past couple of years that even though we might desire to "do it on our own" that we're actually doing it through the support of others and our religious beliefs. Lots of people talk about going for a walk as part of a healthy lifestyle? My walk with faith is the most important I'll ever take and the only one that lasts forever.

Maybe the most life-changing conversation of my life happened as my grandmother's life ended. She told me to get out there and live life to the fullest, to not miss a thing. Her words changed my life. So I would ask anyone reading this to remember that it's okay to love the gym, but realize that the gym will never love you back.

I found inspiration in my religious faith. I also find inspiration in rollerblading by the beach, looking up at the moon, or watching tiny spring flowers that signal the coming of summer. It's hard not to be inspired. To me, inspiration starts with having a grateful heart.

Sometimes I don't want to work out, but I have found that mental battle cannot be won. The best way for me to handle it is to just go anyway. After working out, I tend to feel better. I always believe that feelings follow actions, not the other way around.

The more years I spend doing this, the less I realize it's possible to really plan. Life changes fast and hard. My only plans are to pray a lot, continue working out, and help others reach their goals. 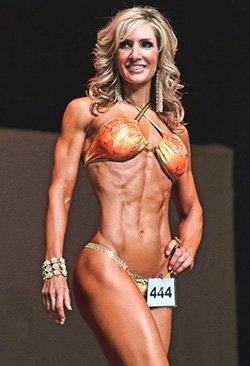 "Bodybuilding is not for sissies. It isn't even for tough guys. It's for tremendously dedicated people who are willing to sacrifice a lot to reach a goal."

Where will bodybuilding take you?

As I already mentioned, life changes so fast. I honestly have no idea, but I know it's going to be exciting and fulfilling. It's already taken me through some of the best and worst years of my life. And I am better for having been a part of it.

What is your most important fitness tip?

Eating right is more important than working out. If you work out like a beast and eat like a pig, it won't do you much good. Start with a base of healthy eating and then—whatever your choice of exercise—it will count.

If you are looking to be a bodybuilder, just realize your life will change. You will lift six days a week. You will watch everything that goes into your mouth. You might spend more on supplements than your electricity bill. You will be sore and tired many days, but have to push through it at the gym. Bodybuilding is not for sissies. It isn't even for tough guys. It's for tremendously dedicated people who are willing to sacrifice a lot to reach a goal. How bad do you want it?

In my opinion, Laura Combs was a groundbreaking female athlete. She had amazing biceps back when the public wasn't sure whether a woman should have biceps or not. Despite naysayers, she followed her dreams and didn't let the drama drag her down. We could all look to her as a role model who paved her own path.

Among the more modern fitness stars, how can you not love Jamie Eason? The girl has a passion for others. She loves her husband, her new baby, her supporters, and her friends. And after all those, she loves fitness. That's an impressive order of priorities.

Without exaggeration, BodySpace helped me reach my goals by being a valuable resource for any question I might have had. Within that community is such a depth of experience and sense of camaraderie that, if you have an issue, someone there has already worked through it and written an article about it. Try it yourself. Type something in the search box and see. It's hard to get lost in the sometimes confusing world of fitness when you use BodySpace as a resource. It's just the truth.

The other thing I love about Bodybuilding.com's site is that there are countless articles and examples of different ways to train. Some people like to lift heavy. Others like cardio. Still others are more into yoga and flexibility. If you ever get bored, simply search around the site to find something fresh and motivating.