Over 40 Amateur Of The Week: Down To The Core

Some people say fitness is a way of life; some people prove it. Patricia fits the latter category. She's been pumping iron for 20-plus years and gets recognized for her accomplishment!

I was always active growing up. We didn't have computers or video games, so being outside was our staple activity. I played lots of tennis and loved running, but being young without knowledge for healthy eating caught up with me. My dad was a member at a local gym and told me I should go with him. I went a few times and decided to join. 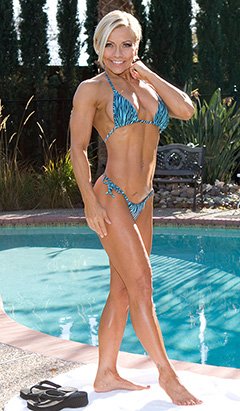 Aerobics was the new thing at the time, so I started taking classes. I sweated hard during aerobics, but I was more intrigued by people who lifted weights and how well-developed they were. I hired a trainer who was the owner of the facility and a competitor. We started training and my body took to the training like a sponge. He put me on a bodybuilding schedule and within months I was amazed at how I looked. I loved the training. It was grueling and there were times I wanted to throw up, especially on leg day.

Seeing how far I came, he suggested competing. That was my next step, or so I thought, but being a single parent raising my son and working full-time didn't allow me the time to compete. I knew I would be on the stage one day, but it didn't stop me from training.

I didn't step onstage until many years later. I entered my first bodybuilding show in 2001. The dieting was by far the hardest. I had some stage fright going in, but at the same time, it was exhilarating. I didn't compete for a few years until the figure division came out, which was a better fit for me, so I decided to try it. I hurt my back severely in Hawaii in 2011. Recouping from that and adjusting my workouts accordingly made me realize that functional training is more important in this stage of life. I contemplated trying the physique division, but for now it's just a thought. 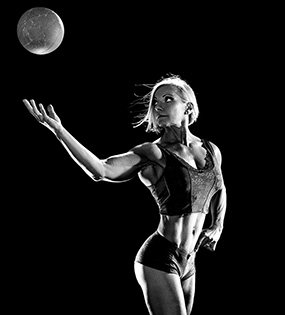 What Supplement Schedule Gave You the Greatest Gains?

I don't use any supplements. I get all my nutritional needs through food.

People ask me: "Are you ever satisfied with how you look?" The answer is no. I love fitness; I do it for a living, so I have to practice what I preach. I believe that staying fit keeps a person feeling and looking younger. If I don't work out, I don't feel good.

When I started training, it was definitely the look of muscle. While that still holds true, I have to say I motivate myself. I'm around fitness all day. How can I not be motivated?

I've been doing this for so long now that it's almost like a job I have to go to. I want to live as long as I can, but be able to function on my own, physically and mentally. There are many medical conditions that occur from not living a healthy lifestyle. That's not me.

I will train as long as my body allows me. I may not step onstage again, and that's OK because I experienced it. After competing, I got into fitness modeling, which was something I never thought I would do. It's amazing to see yourself on print. I had the wonderful opportunity to shoot for Iron Man Magazine with IFBB pro Dave Goodin, and was "Hardbody of the Month" for August 2011 with a five-page layout. This was more than I hoped for. I would love being on the cover of a magazine to inspire others, especially the 40-plus population. 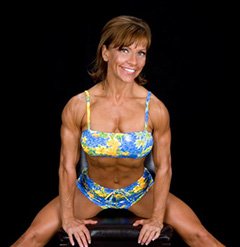 Be consistent in training. Life has its ups and downs and it's OK to step back, but get right back on it. Make fitness fun and remember that we're all given one body and mind. Make the best of both.

Rachel McLish and Cory Everson are inspirational. They have muscle, but still kept their femininity. I would also say Dave Goodin. Seeing him on print is insane, but seeing him in person is amazing. He has an incredible physique and is the nicest guy.

Bodybuilding.com has so many features and articles on health, fitness, and nutrition. It has a store for all your needs and competition photos, but I love BodySpace. It's great to see members' progress updates and pictures and it's nice to get feedback.