Many misconceptions surround the art of bicycle racing; primary among these is that you need to be a 'fast' rider. I will clear up this misconception by explaining the several types of races that exist.

Thinking of trying out bicycle racing? Have century rides lost their allure and you're looking for a new challenge? Participating in a local business park crit may be just what you're looking for. Racing can provide an outlet for that competitive energy while providing a great focus for training, developing technical skills and a fun way to spend your free time.

Many misconceptions surround the art of bicycle racing; primary among these is that you need to be a "fast" rider. Although helpful, many great racers are only "B" riders while many "A" and "AA" riders are too undisciplined to become successful racers. Bicycle racing is more like chess being played at 30 mph!

Talents such as tactical skill; and the abilities to rapidly accelerate, to tolerate pain, and to function anaerobically for relatively long periods of time are much more significant factors than raw speed or power.

Sprinters tend to be larger of stature and capable of working above lactate threshold for long periods of time.

Although genetic factors cannot be discounted, they won't prevent you from becoming a good all around rider and kicking some butt at your local races.

What do you do if, "the spirit is willing, but the flesh is weak"? In other words, what to do if your skills just don't match up with your desire to race or your ability to hold your own on a group ride? Join a touring club!

Touring clubs usually offer group rides for riders of varying ability. Typically, rides are rated on difficulty and riding ability necessary to complete the ride, ranging from "D", or beginner, to "AA" or very advanced.

Touring clubs provide a structured way to improve your riding skills to the desired level by participating in regular, group rides. You can start out participating in rides suitable to your ability, let's say "C" or "CC" and, over time as your skill set increases, you can move up to the next ride level. You can also make some great friends along the way!

So let's say that you've been biking for some time, have acquired some technical skills, are a "B" rider or better, have the competitive urge and want to try your hand at the weekend, neighborhood crit.

What do you do next? Joining a racing club is a good first move. Group or pack riding skills are essential to a successful racer. 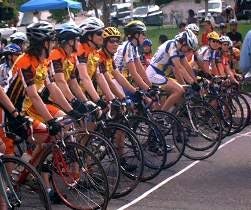 Techniques such as pace line work, cornering in a pack, riding comfortably in close proximity to other riders, sustaining bumps, contact and intimidating behavior from other riders can only be accomplished by participating in group training rides.

So how do you find a racing club that's right for you? Many clubs are sponsored by Local Bicycle Shops (LBS). Try hanging out at some LBS and talking to the owner and staff. Another way is to talk to other riders in those local group rides you've been participating in. After identifying a club, try joining in on several of their training rides.

How do the club members make you feel? Do they provide a competitive, yet supportive, environment? You don't feel too comfortable, do you? Generally, you want to surround yourself with riders who, while supportive, will help guide and push you to greater skill levels.

Race club's are great for "learning the ropes" from skilled and experienced riders. These riders should also be skilled at pointing out and identifying your weak areas and suggest routes to improvement in an encouraging fashion. Don't hesitate to shop around!

"Join in as many different club rides as you can!
You'll soon find a club that feels right."

So we keep talking about "bicycle racing" but what exactly is a bicycle race? You can train all you want, participate in as many group rides as your legs can withstand, and join the best racing club in the world but for what? What is the focus of all this labor of love?

Essentially, there are three basic types of races. Time trials, criteriums, and road races. All are fun and all require a different skill set from a rider. 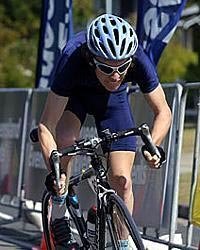 A Time Trial (TT) is the purest form of racing and is also called "The Race of Truth" as it only involves you racing against the clock. A TT is usually 15 km (about 10 miles) or, more commonly, 40 km (about 25 miles) although there is no stipulation on route length.

They are also usually held on relatively flat terrain although a hill or two can be thrown in to spice things up a bit. Riders are released, one at a time at 30 second intervals, from a stationary position. Riders proceed at their highest continuous speed, usually just below their lactate threshold.

Cadence tends to be lower in TT's then in other types of races, usually hovering between 70-80 rpm. The two key words worthy of note are "highest" and "continuous". It is said that if you don't throw up after a TT you didn't try hard enough! Yet particular emphasis must be placed on pacing yourself or else you'll throw up well before the finish line!

At the end of a TT individual times are posted with the rider with the lowest time winning the trial. Team Time Trials (TTT) also exist with teams consisting of two to nine riders being common. TT's are usually favored by beginning racers as they require no pack skills and tend to be safer than criteriums and road races. 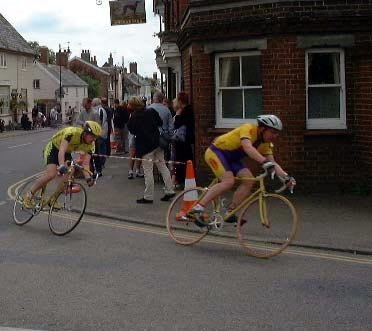 Criteriums, or crits, are races peculiar to the United States and Canada and are responsible for American racer's legendary cornering abilities. They tend to be held on short, less than 3 mile, circuits usually about a mile long. They are usually oval, square or "D" shaped with the most common being held in business/industrial parks or the four streets forming a city block. Crits are composed of laps, usually 12 for "C" races, 20 for "B" races and 30 for "A" races.

The crit is probably the most common form of bike racing in the U.S. and the first race a novice is usually exposed to. Crits are very fast, usually between 25-30+ mph, and very demanding. The ability to pedal through, and sprint out of, corners is paramount. Crits are subject to the "accordion effect", or the tendency to slow down when entering then sprinting when exiting corners - more pronounced the further back in the group you are.

Crits require the ability to sustain high speeds for the duration of the race as well as the ability to sustain frequent and numerous anaerobic exertions. Taking advantage of wind direction, track layout and condition, and, most importantly, drafting off of stronger riders is imperative to successful crit racing.

Road Races are what one usually thinks of when thinking of professional bicycle racing. Most often between 40 and 100 miles in length, they can be comprised of numerous laps or just one lap. The terrain is heterogeneous-made up of climbs, descents and flats and are most often held as a race between two towns. The various stages of the Tour de France, Giro d'Italia and Vuelta a Espana are, for the most part, road races.

Road races combine the technical skill and high speeds of a crit with the endurance requirements of a TT. Not as common in the United States as in Europe they are most often held in rural, mountainous areas.

I hope that this brief article provides a general overview of, and introduction to, the great sport of bicycle racing. Although this article barely scratches the surface of this complex and demanding sport, I hope it will encourage and tempt the average bicycle rider to broaden their horizons to include racing.

In the future I hope to write more in depth articles on the various aspects of this rewarding sport such as training techniques, nutrition and supplementation.

Joel is an active member in long distance cycling and road racing. Come back often to see what training and nutrition tips he has for you.