Know When To Hold It: How To Breathe While Lifting

Maintaining proper form can mean juggling a lot of thoughts. Don't complicate it further by obsessing over breathing patterns.

"Chin up. Chest out. Look straight ahead. Brace the abs. Grip the bar tight. Push the ground away through all four corners of your feet. Drive the hips forward as you clear your knees. Stand tall. Control the lowering. Gently touch the ground, pause and go again …"

Strength training has become so technical these days. There was a time when "grip it and rip it" was all you thought you needed, but now we have armies of personal trainers who seem to justify their pay by the number of instructions they regurgitate. "How do I breathe?" doesn't seem like a question that should even have to be asked, but breathing is near the top of most trainers' exercise-instruction list.

Ask around, and you'll get all kinds of answers: Exhale when lifting; inhale while lowering; hold it hard during the lift; breathe out with effort. Take off your headphones next time you're in the gym, and you'll probably hear someone hyperventilating like they're having a panic attack prior to a bench press. Yoga and other Eastern traditions often have other ideas about breathing, and you'll find their adherents in the weight room as well.

Let's break down which situation is which.

When To Hold It In

I know what you're thinking: Who cares about that stuff? You're a bodybuilder; your only concern is building muscle. You don't use extremely heavy loads, nor do you go extremely fast or slow. It's more along the lines of moderately heavy loads done at a moderate tempo for a moderate number of sets and reps, so why not breathe the way you've always been taught? 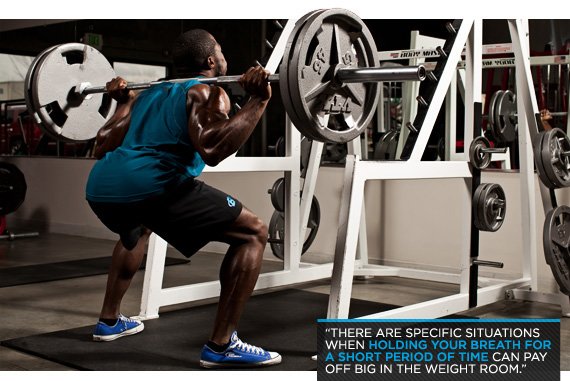 Well, remember one thing: Success leaves clues. Pull up any video of your favorite bodybuilding star and watch how they breathe while training. When Kai Greene is benching 500 pounds or Ronnie Coleman is squatting 800 pounds, are they methodically exhaling when they lift and inhaling when they lower, totally focused on controlled breathing? I don't think so!

When the loads get huge, the tough guys momentarily hold their breath. You would, too! In fact, we all perform what's termed a Valsalva maneuver—exhaling forcibly against a closed glottis—unconsciously when confronted with near-maximal efforts. Just pay attention next time you're exerting force while sitting on the throne. You're not just holding your breath because of the smell!

Outside of the weight room, sprinters, archers, and shooters all know that a strategic breath-hold early in a motion helps them keep steady and direct their power optimally. Or maybe they don't know they know it—they just do it. Breathing, and in particular breath-holding, is an instinctive process. If you attempt to lift a heavy load, you'll naturally hold your breath.

Research backs up the safety and effectiveness of the situational Valsalva. A study published in the Journal of Strength and Conditioning Research in 2010 found that, for subjects lifting at their one-rep maxes, this technique produced only minor and transient rises in blood pressure.

To maximize intra-abdominal pressure during strength training, you should breathe deeply—approximately 75 percent of maximum—into your belly and hold that breath if possible throughout a repetition, exhaling only when you complete the rep. This provides optimal support for the spine, and it makes you stronger structurally.

When To Let It Out 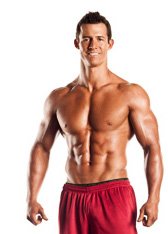 It's worth emphasizing that the Valsalva maneuver is only for short-duration, high-exertion efforts. The same technique that provided a core of strength for your PR back squat can become a serious headache—literally—when you apply it to a run-of-the-mill bench press.

Many beginners—and a few experienced lifters—stop breathing during repetitive, low-intensity lifts, either because they think it'll make them stronger, or because they just plain forget. An extended Valsalva maneuver like this can cause a dangerous spike in blood pressure, bursting blood vessels in your eyes and forehead, causing headaches and temporary vision disturbances.

It could also cause you to faint on the spot, which has its own set of risks, no matter how good of a spotter you have.

Of the 25 documented weight room-related deaths in the United States between 2008 and 2012, the vast majority occurred due to asphyxiation caused by neck or chest compression during the bench press.

While I'm on the theme of losing consciousness: If you're familiar with the "fainting game," then you already know that hyperventilation isn't a good way to prepare for any activity, with the possible exception of falling face-first onto the ground. You may see others doing it in the gym, but just steer clear and beware of falling weights.

Looking for a simple takeaway? Here it is: Act natural, bro! When lifting submaximal loads, your normal exhalation-inhalation patterns are usually sufficient, or perhaps a longer breath phase with a short breath-hold at the most difficult portion of a lift.

If you utilize isometric contractions, pressure may build up high if you hold back your breath. In this case, more rapid breathing patterns can help—your body will let you know when. And finally, hypertensive and cardiac patients should be encouraged to breathe through pursed lips or hum out through the nose even when lifting heavy loads. For them, the Valsalva is a big no-no. 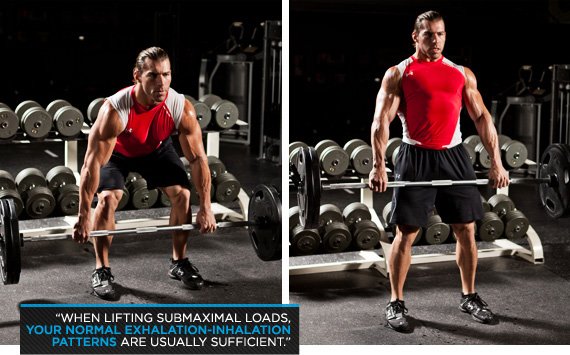 If the eccentric/concentric breathing pattern has become second nature to you, that's fine, but don't dwell on it. Dr. Stuart McGill and the late Dr. Mel Siff, two giants in the field of strength and rehabilitation, agreed that the common recommendation in weight training of methodically exhaling when lifting and inhaling when lowering is a mistake. Siff contended that the "careful instruction as to the technique of a given exercise will automatically result in the body responding with the optimal muscle recruitment strategy throughout the duration of the movement."

This applies to breathing as well. Focus on proper form and breathe naturally.