As a thrower on the world-class level I wanted to look into the benefits of power lifting versus Olympic lifting. I was looking through some journals and located a study performed by the Journal of Strength and Conditioning Research.

As a thrower on the world-class level I wanted to look into the benefits of power lifting versus Olympic lifting. I was looking through some journals and located a study performed by the Journal of Strength and Conditioning Research, they determined what I was looking for through a study involving power lifting, Olympic lifting, and sprinting on strength and power characteristics in the squat movement. This article was very interesting to me because they related it to the squat movement, which is my best lift. As a thrower I always want to get as strong as I can get but still stay explosive. In this study some good ideas surfaced to me about training in the squat for the thrower type athlete.

In this study 28 male subjects between the ages of 18 and 32 were chosen. These individuals were chosen at a national level. I thought this was important because this validated the study knowing they were in good shape and had good weightlifting experience. There were four groups consisting of powerlifters, Olympic lifters, sprinters, and a control group. The thing that I didn't like about the study was that all the testing was done in one day. The results might have been different because of this.

First the vertical jump was tested. Most throwers including myself have a good vertical jump so this was interesting to me. When I feel like I can jump high and far I feel light on my feet therefore I am explosive which is very important for throwing. After the vertical jump test a 1RM was performed in the squat followed by jump squats with their 30, 60, and 90% of their 1RM. The squat jumps were performed on a force plate. I think these are good tests for a thrower but not many people have access to force plates.

I thought that the results turned out a little different than I expected. As throwers, our mentality is the stronger you are the better. That is just the way we operate. There is a point where you have to taper off with the powerlifting and move to more explosive movements the closer you get to your competitive season. The results of this test were that the powerlifters had the greatest squat followed by the Olympic lifters then the sprinters and control group. The Olympic group had a significantly higher peak force than the powerlifters and sprinter groups. I think that this is important because as throwers we need to have our bodies operating at a peak force when we are competing in our events. As we are throwing, we are looking for any implement to increase speed as we go through the ring. Any time we are decelerating we are not going to throw as far. As a thrower we need to be able to move a good amount of weight in a fast, explosive movement rather than going really heavy on squats and moving the weight slowly. In conclusion the Olympic group was able to utilize maximal strength at high velocities and thus produce the highest power outputs. 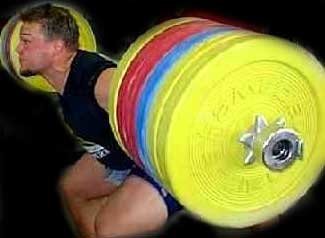 To apply this article to throwing we need to look at what part of the season we are dealing with. In the off-season and pre-season we can get away with squatting really heavy and moving the weight slower. During this time we are also performing Olympic lifts to work on our explosive, peak power lifts. I think it is important to implement both of these lifts during off-season. I prefer rotating snatches and back squats and then performing the power cleans and front squats. You are getting the best of both worlds when you do this. In the off-season I like to train around the five repetition area for squats and three to five reps on my Olympic lifts.

When pre-season rolls around I like to drop down into my strength phase and this consists of three reps on my Olympic lifts and three to five on my squats. When I drop repetitions I really stack on the weight and move it in a fast explosive way without breaking my technique. This way I can get the both of best worlds by moving a lot of weight in a fast motion. I also implement plyometrics to train my fast twitch and the elastic properties of my muscles along with my heavy weight training.

I hope that this article review along with my insight has helped you with some training tips for ways to better your performance as a thrower. I think that you need to train as a combination of these two types of lifters. As for other lifts that are great for throwing I will have some other articles and insights about those in the future.

If you have any questions you can e-mail me at iwaltz@hotmail.com and I would be glad to answer any questions you might have. I graduated from Washington State University with a Kineseology degree and a minor in strength and conditioning. I threw shot put and discus for the cougars from 1995-2000. As the Bodybuilding.com site grows in size it will be a great source of information and training tips not only for bodybuilding, but for all sports including throwing. They have great supplements with a price no one else can beat. I will get more article reviews along with my opinion and training tips in the future.

Track and Field on a World-Class Level. Learn how to develop relentless strength, mass and power with these supplement tips and training articles.