Kettlebells: Should You Use Them?

Kettlebells are terrific for bodyfat loss, improving lean body mass, and helping teach proper speed of the hips (important for speed and power sports). Learn what they are and what exercises you can do with them!

Being a consumer in today's fitness/health market can be very overwhelming. Companies, salespeople, and even well-known athletes can be convincing when it comes to buying certain product, whether it is the "most effective" new piece of equipment or a supplement that is "500 percent better" than all the competitors. Having been a part of the industry for some time now I believe I have been able to cut through the garbage of advertising and hype and hopefully can shed some light on good and over-hyped products. In this particular article I am going to discuss a new piece of training equipment that has been receiving a lot of attention as of late, kettlebells.

Kettlebells ... What Are They?

Anyone that is familiar with kettlebells will know that they aren't really new. In fact, they can be traced back to the Iron Game for well over 100 years. For those who are unfamiliar with a kettlebell, imagine a cast iron ball about the size of a cannonball attached to a thick iron handle. Certain companies have also made plate-loaded kettlebells that allow for more incremental loading. This is different than the traditional kettlebell that would come in poods. A pood is approximately 16 kg or 35 pounds. So, obviously going from one pood to a one and a half pood can be challenging to a new lifter. However, later I will discuss the disadvantages of plate-loaded kettlebells.

I first learned of kettlebells through articles by Coach Davies. I had never really seen or heard of kettlebells before this point. Initially my reaction was similar to most people. Since I have dumbbells and barbells why would I even need a kettlebell? Isn't this just a new marketing scheme? I fought the temptation to buying a kettlebell for some time thinking that maybe, just maybe it was useful tool, but I really wasn't going to be missing out on anything. Well, to make a short story long, after I pestered Coach Davies about the usefulness of kettlebells I finally broke down and bought my first. On the advisement of Coach Davies I bought mine from www.dragondoor.com.

Being a rookie of kettlebells and to give them an honest trial run I knew I must at least purchase the video of Pavel Tsatsouline's The Russian Kettlebell Challenge. I knew of Pavel's expertise with kettlebells (he was a nationally ranked kettlebell lifter in Russia) and with training elite special forces units. I felt confident the information I was going to receive was going to really provide me the background to determine if kettlebells were as effective as what was being promoted.

I noticed during the video that many of the lifts were variations of the classic Olympic lifts. Hopefully, everyone knows my fondness of the Olympic lifts from my articles, so this made me even more intrigued. Having a background in Olympic lifting, I know one of the major problems with such training is the technical nature of some of the lifts. While watching Pavel's videos I noticed that many of the kettlebell ballistic lifts were much easier to learn than the traditional Olympic lifts, and while still having some important cuing seemed plausible that anyone could learn these lifts. There were some interesting other exercises as well, such as the bent press, several different overhead pressing exercises, the windmill.

Adding Kettlebells To My Workout Program

Finally the time came to give the kettlebell a try in my own program. I immediately noticed a difference in the movement of the kettlebell versus a dumbbell. The flipping of the kettlebell and the leverage was different along with the extra grip work that was performed because of the thick handle. I was sold immediately that this was a useful tool. However, I thought I might be somewhat bias, so, I worked with some powerlifters at my facility to see their thoughts. One of the lifters had been performing the windmill with a dumbbell and felt confident. He said he had worked up to a 60-pound dumbbell in the drill. Quickly I gave the 24kg (53 pounds) to my friend and when he began to perform the exercise we noticed his arm started shaking violently. He commented how the feel was different, mainly because of the leverage of the bell.

The other great benefit of using a kettlebell is the ability to perform many different hybrid exercises. With a dumbbell the movements are not as smooth or easy to perform because of its shape. The kettlebell allows one to transition to many various exercises quickly. An example would include, clean+squat+press+windmill. This is not only effective for strength, but outstanding for dropping bodyfat because of the high caloric expenditure and the increased level of intensity. 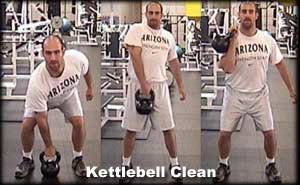 I mentioned earlier that there are companies that offer plate-loaded kettlebells, which would make sense to many lifters. However, the problem stems from the fact that the kettlebell flips onto the wrist in many of the exercises. This is not a problem when the exercises are done correctly because of the shape of the bell. This changes though when you use plates. Imagine several 10-pound plates banging against your wrist! Not too pleasant right? In a traditional kettlebell you also have a stationary handle, the newer models may have a revolving handle. While this may look cool, the problem then becomes the kettlebell would gain too much momentum when flipping over, again, this would lead to an unpleasant striking of the forearm.

Are Kettlebells Worth The Money?

Since my first experience with kettlebells I have found them extremely useful tools for all my clients. They are terrific for bodyfat loss, improving lean body mass, and helping teach proper speed of the hips (important for speed and power sports). I would not get rid of barbells and dumbbells, but do feel that kettlebells have and SHOULD be used by any serious lifter. Just make sure that you find a qualified instructor if you are wanting to incorporate some of the more challenging lifts. You can find information on instructors and kettlebell information on www.dragondoor.com. Below I will summarize some of the benefits of kettlebell training over more traditional weights.