A conditioning specialist in Scottsdale, Arizona. He holds a Bachelor's of Science in Exercise Science. His articles will help you!

There are a million products that make promises on increasing one's vertical leap. Everything from jumping shoes to programs that simply use bodyweight exercises. In many sports, athletes wish to jump higher in hope they will improve their performance in their chosen sport. While this may be the case, it is equally important to remember that there are far more important aspects to sports performance than just how high you jump. However, understanding what makes for a good vertical jump can help many young athletes save a lot of money and see great progress from their work.

This is the least exciting of all the principles that I could possibly name. However, if you do not have proper range of motion in your hips, shoulders and low back you are not going to reach your potential. Since the dominant amount of force production in a vertical leap is accomplished in the hips, you will see that optimal range of motion is necessary. If your hips are tight you will not be able to translate force through the hip musculature properly and you are setting yourself up for injuries, primarily in the low back and sacroiliac joint.

Simply stretching though in the traditional sense will not be the solution to your problems. In flexibility training there are two main types, static and dynamic. Static is the what most traditionally think when flexibility is mentioned. Holding a particular stretch for 20-60 seconds. Dynamic flexibility involves certain types of movement that will help increase the range of motion in certain joints. My preferred examples might be stepping over hurdles for the hips. The importance of the distinction relates to how you structure your program. There is a poor correlation between these two types of flexibility. Meaning if you are bad in static stretching you can still be good in dynamic. It is important to use both. Usually we will use dynamic methods prior to a workout, as it will provide proper range of motion and assist in increased force production. Static flexibility has been shown to reduce force production so usually it is saved for after the workout as a recovery method and additional flexibility training.

Sport Stretch by Michael J. Alter provides some great ideas for static stretches. Many of my dynamic stretches use basic tumbling, hurdles and full range of motion lifts. By using all these methods the athlete can increase many aspects of their performance including their vertical jump.

The Olympic lifts are terrific to incorporate into any serious sports performance program. My only concern is when athletes are unsure how to perform them correctly still try to utilize these lifts. This is where injuries may occur. If one is taught these lifts properly they are far from dangerous and can provide numerous benefits. I suggest if someone were interested in learning the lifts to find an USA Weightlifting Coach in their area.

Ok, so how do the Olympic lifts and their variations help the vertical jump? As I mentioned earlier the hips are primarily responsible for the success in a vertical jump. What the Olympic lifts do is teach the lifter how to use their hips explosively. This ability to translate force will allow one to utilize the stretch-shortening cycle (SSC) more efficiently leading to a better jump. A good example of the power of the SSC is the following. Try to jump, but before you explode up hold the bottom position for four seconds. Measure how high you jump. Next, dip down as fast as possible and come back up as fast as possible. See a difference? Chances are you saw significance between your two efforts, the second jump being much higher.

The other benefit from the Olympic lifts is if you use their full movements you can greatly increase the flexibility in major joints such as the hips and shoulder girdle. The Overhead squat, Drop Snatch and others are great exercises to develop overall body strength and power. However, they will still increase range of motion in all important areas.

If you would like a stronger example of the impact of the lifts let us look at the following. I would like to thank my colleague Chad Ikei for the following information. This excerpt is from his article "Pulling To Jump Higher."

"Nicu Vlad of Romania, World Record holder and Two time Olympic Medallist, came to the United States back in 1990, with now current U.S. National and Olympic Team Coach Dragomir Cioroslan, for a training camp. It was here at the U.S. Olympic Training Center in Colorado Springs, that this 100-kg (220 lbs) weightlifter recorded a 42-inch vertical jump. Not to mention he was in weightlifting shoes, which weighs a lot more than tennis shoes and no formal warm-up. (Snatch 200 kg, Clean and Jerk 232.5 kg)

Wesley Barnett of Team USA, 3-time Olympian and Silver Medallist @ 1997 World Championships, have legs (especially hamstrings) and ass like a thoroughbred on him that most body builders would like to have. He has recorded vertical jumps higher than 39 inches at a height of 6-foot-1 and 105 kg (231 pounds). I've even witnessed him dunking a basketball while jumping over my head, and I do mean literally jumping over my head which of course only stands a mere 5-foot-2 but he straddle jumped directly over my head and dunked. (Snatch 175 kg, Clean and Jerk 220 kg)

Mark Henry, 1996 Olympic Team Member, now known as "Sexual Chocolate" on the WWF scene, had quite a vertical jump. At 6-foot-3 tall he could dunk a basketball, not to mention that he could squat over 1000 pounds and deadlift over 900 pounds. Now dunking a basketball at 6-foot-3 doesn't sound that hard, but take in to account that he weighed at that time 175 kg (385 pounds). Now that's impressive for a big guy. (Snatch 180 kg, Clean and Jerk 220 kg) 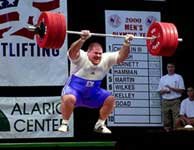 Shane Hamman, 2000 Olympic Team Member and current National Super heavyweight Champion, another big man weighing in at 163 kg (358 pounds) but only at a height of 5-foot-9, can jump onto boxes at a height over 42 inches. Of course Shane was also known for his squatting ability of over 1000 pounds. (Snatch 195 kg, Clean and Jerk 230 kg)."

This is amazing considering the average vertical jump of a Division-I men's basketball player is 28 inches!

Plyometrics are one of the most poorly understood training methods in our toolbox. This method is also known as shock training. The purpose of plyometrics is not to be a conditioning technique, but rather improve the utilization of the SSC. However, one must posses a descent level of strength to benefit from such training as the joints and musculature will be able to translate force optimally. The first two methods may act as preparation for plyometric training. 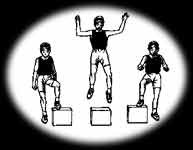 Everyone must establish a baseline before they begin a plyometric program. Using basic foot contact drills and general physical preparation drills are terrific. This would include exercises like jumping jack, split shuffles, slalom jumps, mountain climbers, jump rope, as well as many others. From here additional bounding drills such as skips can be included. One should not train with plyometrics more than twice a week and this will vary greatly on the phase of the cycle. Plyometrics should also mostly involve several sets of low repetition training as we are aiming for quality of jumps than the number.

It is important to remember this type of training has a great impact upon the body. Recovery will be crucial as well as the type of surface you use. Sandpits are my personal favorite as they offer a great deal of benefits to plyometric and sport-specific training. Just like any other training method if you do not understand how to use or implement this method you are better off not using it.

After reading the above ideas hopefully it is clearer that fancy equipment or "high-tech" methods are not necessary to have an incredible vertical jump. I would highly suggest that if you were interested in using any of the above methods but are unfamiliar with them to seek out a highly qualified strength and conditioning coach in your area. Most coaches will have a certification from National Strength & Conditioning Association and/or USA Weightlifting. Remember anything is possible with smart and well-organized training.