Get In The Habit: The 30-Day Habit-Forming Challenge

You have a bucket list, even if it's not actually on paper. The question is: Are you moving closer to accomplishing it? If not, this month is your chance to change. No more excuses!

The rules—or strong suggestions, rather—listed on the site tinyhabits.com seemed simple enough: Make tiny behaviors that are easy to execute, decide on a celebration method for each behavior, and combine the behavior with an already existing habit to use as an anchor. These are the three habits I came up with:

I filled out the online form and hit "send."

I was supposed to practice these behaviors on a daily basis whenever the trigger event occurred for five consecutive days. The task couldn't be more straightforward, and I could see dozens of Tweeted testimonials about how it had changed people's lives. I was raring to go.

On the first day, I sprung out of bed enthusiastically and went to work on my new habits. I was confident that I'd have no problem remembering my new behaviors. I brushed my teeth that morning, then I made a beeline for the kitchen to pour myself some water. Not long afterward, I treated myself to some butterscotch coffee and then immediately pulled out my phone to text my brother. I'd been planning on writing an article that day, so it seemed only natural for me to pull out my laptop and get to typing away on my next fitness piece.

Later that day, I received an email from B.J. Fogg, the founder of the site, asking me a simple question: "Were you successful in your three habits? Reply with Y or N for each."

I typed the letter Y three times. This was too easy.

Fogg is a scientist and professor at Stanford University, known for his work on behavior change and habit creation. He designed the Three Tiny Habits program to enable online users to experience firsthand the skill of creating new habits. The point, he emphasizes, is not necessarily to succeed in the new habits themselves, but rather to become better at the skills required to create these habits. It's free to participate, and Fogg communicates personally with each of the participants who enroll each week. 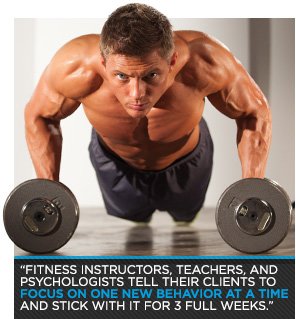 The old rule of thumb is that it takes 21 days to form a habit. Fitness instructors, teachers, psychologists and other authority figures regularly tell their clients to focus only on one new behavior at a time and stick with it for three full weeks. Fogg, however, says if you keep the habits small enough, you can establish several habits simultaneously in a much shorter length of time.

"The easier it is, the less it depends on motivation," he writes. The problem with motivation is that it's unreliable and unpredictable. Sometimes it's sky high; other times, it's virtually nonexistent. To rely exclusively on motivation would be asking for failure. Instead, using an existing anchor—drinking a cup of coffee or brushing teeth, for example—to trigger the new event removes the largest barrier to cementing a new habit.

My aim in participating in Fogg's program was not to master the specific behaviors in my list. Rather, I was curious about the thought process and the journey: what kind of roadblocks would I face along the way? How and why would I succeed or fail, and what would I come to understand about habits?

As an aspiring fitness instructor and writer, I continually come up against people's resistance to positive change. I wanted to understand it, starting with myself.

By the time day three rolled around, I was stumbling. I'd sit down at my desk to write a note for myself, only to remember that I was supposed to work on some article—and then I'd brush it off. I'd stare blankly down at my phone, java in hand, trying to decide which family member to text and what to say. I was squeamish; it all felt too forced. I would clean my pearly whites in the evening and then faceplant onto my bed. The thought of getting a glass from the kitchen—a whole 20 steps away!—seemed like too much work.

I thought back to the reminder to keep the habits tiny. These were supposed to be painless no-brainers that would take me not even 30 seconds to carry out. Yet for some reason, I wasn't up to the task.

By day five, my tiny habits had come to feel like immense obligations. I felt guilty when I intentionally dodged the behaviors I promised to carry out and even caught myself trying to avoid the anchors. I was well aware that sucking it up and just doing it would take no time and would not take away from my daily activities by any means, but I still resisted.

When Fogg emailed me on that day asking if I was successful in my habits, I typed "YNN." In a word, I'd failed.

When Fogg stressed over and over again on the site to keep my goals tiny and simple, I'd nodded my head in understanding, but I hadn't heard him. My behaviors were still clearly too large for me. The habits were supposed to be effortless and meld seamlessly into my life, but that ended up being far from the case.

The habits were too big. That I understood. But the question still remained: Why did that matter?

I found that answer in Shawn Achor's book The Happiness Advantage, which I happened to be reading that week. Achor, a Harvard professor and one of the world's leading experts on positive psychology, talks extensively about the "20-Second Rule." This principle is based on the premise that there exists an activation barrier of sorts for activities, both positive and negative, and this barrier is usually encapsulated in the span of about 20 seconds. With Achor, for example, he had difficulty practicing playing his guitar for even five consecutive days due to the 20-second walk to his closet to retrieve the instrument.

For me, the 20-second walk to the kitchen to fetch a glass of water was my barrier to consuming more liquid. And with my other two habits, taking the time to think of a sentence to add to an article—particularly when I wasn't in the mindset to write—and coming up with something to text a family member rather than waiting until I actually had something to say took more time than I was willing to spare.

So how difficult is a habit to get going? Achor says the easier it is to get started, the higher the likelihood that you'll follow through.

"Willpower alone is insufficient to make the right choices," Achor writes. Instead, he says we should redirect our energies on removing the resistance—physical, mental, or emotional—to our desired behaviors. To me, this sounded a lot like when Fogg tells his followers, "You should arrange the world around you to make your new habit easy to do." 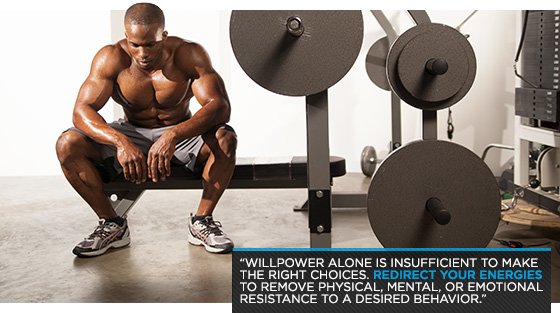 January 1, 2013, has come and gone, and March 1 is right around the corner. By now, thousands—millions, probably—of New Year's Resolutions have turned into immense guilty burdens on the consciences of those who made them. I will lose 15 pounds this month; I will finish a marathon this fall even though I despise running; I will work out six days this week despite not having exercised regularly for years. Many are on track, a select few are ahead of schedule, and the rest are donning maternity pants and shoveling fistfuls of cake, all the while resolving to re-start their journeys on some other random date.

I'm not saying that those who set New Year's Resolutions are inherently bad or weak—even though that may be how they describe themselves at this point. I argue that setting an arbitrary start date as the beginning of a new, drastic life overhaul sets the risk of failure alarmingly high. If there's one thing that the researchers I mentioned share, it's that they focus on training the skill of building skills, rather than obsessing over specific goals. They urge you to start small, and rack up successes incrementally. That way, you get better at getting better at things.

Google Engineer Matt Cutts encapsulated this idea memorably in a recent Ted talk. I recommend you take three minutes out of your month to let him kick you in the ass a little.

If you made it this far, you know I'm not going to let you off without a personal challenge. I encourage you to take the next 24 hours to think of a change you want to make in your life. Pick one sustainable habit that you want to pick up—not three—and apply it every day for 30 consecutive days.

Cutts wrote a 50,000-word novel in a month, which sounds fun in theory, but also a little too similar to losing 15 pounds in a month. So instead, pick a habit that speaks to you. Spend just a few minutes each day planning out a project you've wanted to accomplish for years. Each day go learn about one new yoga pose, or learn one Spanish word. Jump rope. Do planks. Meditate. Whatever it is, choose something you know will make you feel better about yourself, and you know you can do.

As Cutts notes, "The next 30 days are going to pass whether you like it or not." So why not give it a shot?