From Eating Disorder To Bikini Competitor In 5 Months!

Chelsea's weight had dropped to 82 pounds. Her organs were failing and her bones were breaking. Five months later, she was competing! 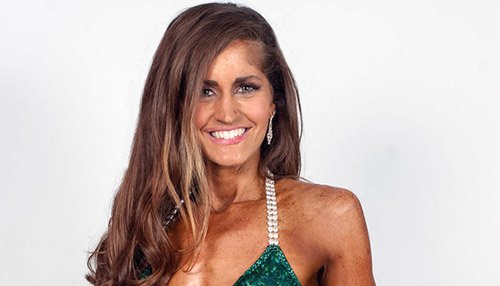 At age 16, Chelsea Kamody had everything a girl could want: a perfect body, a loving family, straight A's in school, and a solid pack of friends. But after her beloved grandmother suddenly became ill and passed away, Chelsea found herself desperate for control. "My grandma was my piano teacher and my best friend," she says. "I'm terrible at holding in emotion, and when she passed away, I had no idea how to handle myself."

To cope with her anger and grief, Chelsea started running and jumping rope. Yet this attempt at self-healing soon became a poisonous addiction to exercise that made the next 10 years "a literal hell." It choked her relationships, sapped her emotions, and, more than once, nearly cost Chelsea her life.

Now, Chelsea has emerged from hell wearing a bright emerald bikini and an even brighter smile, and she's reclaimed far more than just her physical health.

This is her remarkable story, in her own words.

How did a happy, healthy teenage girl develop an eating disorder?

I was a very happy child growing up. I had a wonderful family, great friends, and excelled in music, school, and sports. In my mid teens, I weighed 128 pounds, an ideal weight for my height.

However, when I was 16, my grandmother, who was also my piano teacher and best friend, developed a rare form of cancer from which she died.

Losing her tore me apart. Rather than dealing with it in a healthy way, I resorted to extreme dietary restriction and excessive exercise. Within a few months, I not only lost weight but became very sick mentally. I had an eating disorder.

How did this unhealthy weight loss affect you?

The first few months went by unnoticed. My parents first noticed my weight loss one day when my dad and I went to the gym to practice volleyball, but I played it off as no big deal. Afterward, my dad took me to Subway to have our usual bacon-and-turkey sub, and I threw a tantrum. In my mind, this was him trying to control my life. 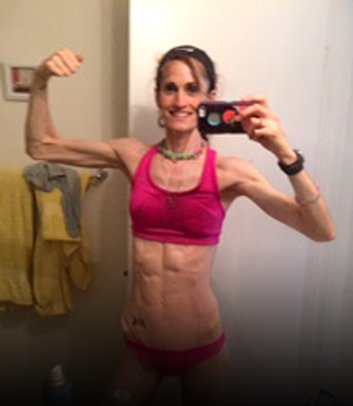 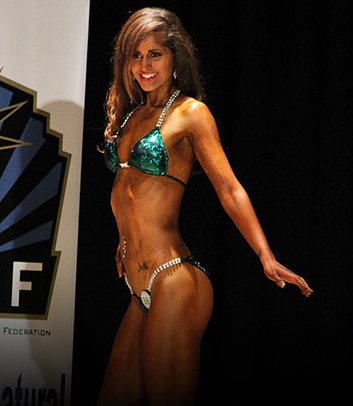 Did you develop a healthier relationship with food after college?

Things really went downhill after I went to college. You could have given me a choice between eating a cookie and seeing my mother die, and I still wouldn't have eaten the cookie. I would skip family events because I couldn't bear to miss one day at the gym.

I've actually dealt with various eating disorders over the last ten years. While it started as anorexia, I developed a binge/night-eating disorder for some time, which for me meant I would get up in the middle of the night and just eat what a "normal person" would eat in a week, but in an hour. Imagine how you feel when you're full; this was 10 times that, and it hurt. It hurt so much that I almost had to call an ambulance a few times.

The next day, I would go to the gym and work out for 12 hours—not just to burn the calories, but because I felt guilty and was scared I was going to gain a million pounds. I was really, really sick.

After college, I moved from Ohio to Virginia for my first teaching job. I told myself this would be a fresh start. Unfortunately, this was so far from the truth. Moving far away from my friends and family not only left me lonely and hurting, but also gave me complete control. I did not exert this control in a positive way. My exercise and eating restrictions became more intense, ruling my every waking moment.

At my smallest, I weighed 82 pounds. My BMI was about 8 and I had 0 percent body fat. My brain was not functioning properly, and according to my doctors, my organs were weak.

When you read stories about people with eating disorders, most have BMIs of about 13-15, and body fat of 9-10 percent. At my smallest, I weighed 82 pounds. My BMI was about 8 and I had 0 percent body fat. My brain was not functioning properly, and according to my doctors, my organs were weak. I looked like a cancer patient; I constantly felt like I was going to pass out, and I could barely concentrate enough to hold a simple conversation. I honestly would go through every single day praying I didn't pass out at work or the gym.

This past November [2014], my doctor told me my organs were failing and that I wouldn't make it to Christmas at the rate I was going. At first, I just gave up. I had been telling myself for 10 years that I was going to fix it myself, and that no doctor and no therapist was going to help me. I even contemplated suicide, but then I thought, "I can't do that to my family. I don't want to be some news story." So I decided to just wait it out and enjoy my last couple of months.

Yet you're still alive. What changed?

Something finally clicked. I started thinking about everything and everyone in my life. I had a great family, amazing friends, a wonderful job, and a lot going for me. I also started thinking about the old me—the happy, energetic girl who loved life. I wanted her back so badly. I knew she was in there, and something had to change.

I'd spent hours and hours in the gym, working my butt off, and what did I look like? A bag of bones. I felt I had worked harder than anybody, but I had nothing to show for it. Suddenly, I got angry.

Then I remembered that in high school, before I became a skeleton, I'd actually had a pretty face. I knew I had a personality, but had forgotten what it was because I hadn't been myself for so long. I thought of my great teaching job, and my talent as a concert pianist. I thought of my family and friends, and how supportive they had been, and how much they loved me. I couldn't leave this world—not when I had so much going for me.

Having experienced this revelation, what did you do next?

The only way I was going to change was if I had a goal. I had always admired the girls I saw in fitness magazines and on BodyBuilding.com, so I decided to enter a physique contest. I knew I couldn't do it alone, so I started looking for a coach. Several of them declined to work with me because they thought I was physically unhealthy and mentally unstable. Eventually, I found a coach named Angelina who understood what I was going through and who was willing to help me. 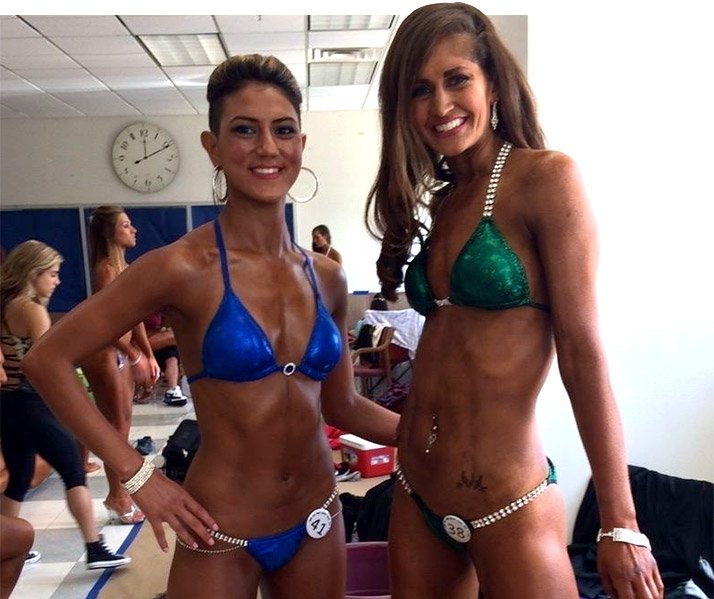 I had always admired the girls I saw in fitness magazines and on BodyBuilding.com, so I decided to enter a physique contest.

My initial goal—I never thought it would happen—was to compete onstage in a bikini by the end of the summer of 2015. When I first asked Angelina around Christmastime if I was ready to do one, she said I had a "long way to go." But I am the kind of person who goes at what I want in full force. Five months after I started, having gained 45 pounds, I competed in my first National Gym Association (NGA) show in Fredericksburg, Virginia, in March 2015. I was able to step onstage at a healthy 124 pounds. I then competed in an American Natural Bodybuilding Federation (ANBF) show in May 2015, and another NGA show in June 2015.

I've heard many people say that if you have an eating disorder, you shouldn't compete. But if it weren't for these bikini competitions, I wouldn't be here. Having that goal is the only thing that has kept me on track this whole time. I'm not running 12 hours a day anymore; I focus on lifting weights. And it's for these shows.

Becoming part of this sport has saved my life. 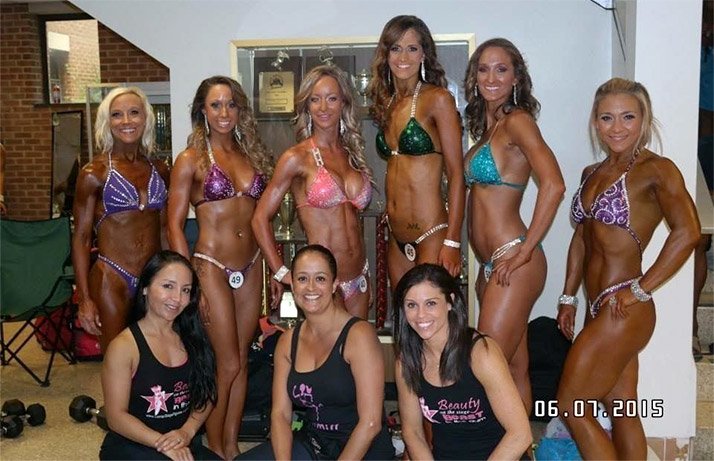 I've become part of a few forums on Facebook, and the friends, support, and advice I've gotten from those is absolutely amazing. I cannot thank the bodybuilding community I'm a part of now enough.

When I hear other competitors talk about their low-carb, low-calorie diets, I feel like a pig. I deal with this by surrounding myself with people who have goals that are similar to mine, especially guys who are trying to gain. Their mindset is more along the lines of, "Eat, eat, eat!"

I've become part of a few forums on Facebook, and the friends, support, and advice I've gotten from those is absolutely amazing. I cannot thank the bodybuilding community I'm a part of now enough.

What has been the most rewarding part of your transformation?

What it has meant to my family. I put my family through hell, and that's my biggest regret. My family was my motivation when I began training for my first contest. When I was having trouble eating as much as I needed to, I would picture my parents looking at me onstage with tears of pride in their eyes. Now, I come home and instead of seeing them scared for my life, I see them smiling and so happy to see me.

I was not myself for the past couple of years. I had no personality. I couldn't even hold a conversation. While I was sick, I forgot what it meant to love people. I had no feeling or emotion. I cared about nothing and no one. But after I started gaining weight, I began feeling like a human being again. I would see my mom and feel happy and smile and mean it, and it was the most amazing feeling.

Now, I just love life. I feel love and emotion again. Yes, I have my struggles, and I get down on myself, but I look back at my days on the feeding tubes in the hospital, and I'm so thankful.

Where do you see yourself in 10 years? 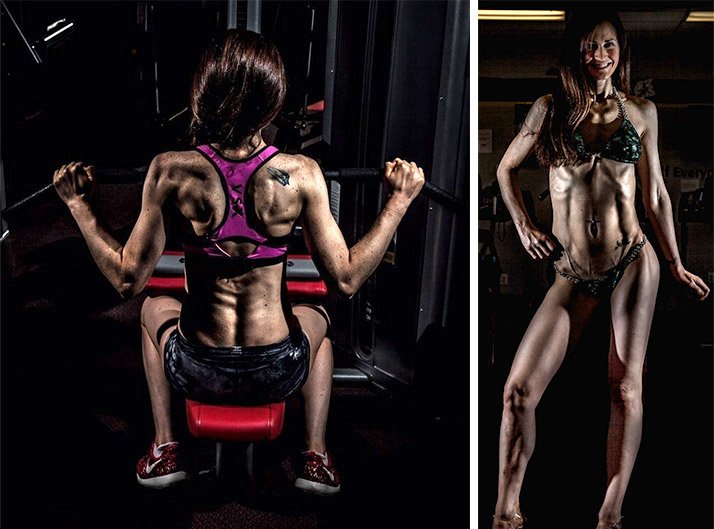 Eventually, I would also like to do something like motivational speaking, counseling, or training to help people with eating disorders. I love helping people get healthy and feel good about themselves.

Eventually, I would also like to do something like motivational speaking, counseling, or training to help people with eating disorders. I love helping people get healthy and feel good about themselves. And being healthy doesn't mean you have to compete—just get out there and find what you love to do!