Best Of The Forum

Each week there will be new posts here of the best threads and posts from the forum. Stay tuned to see what is posted next.

I'm About To Take Anabolic Xtreme

Every once in a while, I'm sure you've come across a thread that you couldn't believe actually existed. Hell, who am I kidding, I see those everyday! When I was skimming across the forums the other day, I saw one that takes the cake. How someone can be so ignorant is very much beyond me.

The worst part is that this guy wants us to believe he knows what he's talking about and that he's done his research. If you check out this thread, you'll know exactly what I'm talking about. I usually don't make fun of people, but this is just asking for it. Join in the fun. Thanks for the laugh, 'dAi'.

Random Thread Of The Week

Another thread that I just couldn't put into a category. This week I bring you the random thread of something free. Double XL magazine has been gracious enough to put up an issue of their magazine for free here on BB.com! The free issue can be found here and the thread dedicated to its cause is here. 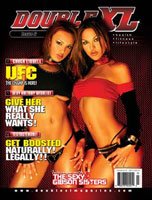 I've checked out the magazine, and there is a lot of great stuff that just about anybody could make great use of. 'DoubleXLMagazine22' was the creator of this thread, and clearly affiliated with the magazine itself.

If you have the time, which I'm sure you all do (there's always time for hot babes!), check out the thread as well as the magazine which, may I remind you, is completely free. That's right - free! The bodybuilder's lifestyle is not cheap, so take advantage of this free offer. Free...

Workout Journal Of The Week

With the 2008 Utah Summer Games only two years away, I am truly surprised that I haven't seen many Olympic prep threads on the boards. I finally came across one and I liked what I saw. This thread is quite detailed and it's good to see someone looking long term, rather than short term, like so many other people do.

'ExtraUltra' shares with us his quest for gold as he works to make the cut. Lots of people have shown interest in this log and I can see why. Check it out for yourself and see why it was chosen as this week's best workout log.

Nutritional Thread Of The Week

This week, I have selected a thread that has been on the boards for several months but in all of those months was never selected to be the Nutrition Thread Of The Week. Perhaps because it promotes insane cheat binge eating, I steered clear of highlighting this thread.

After careful deliberation, however, this thread does deserve to be a BOF winner. I mean, what other nutrition thread has amassed over 6,000 replies and 180,000 views? If you haven't already seen this thread, I'll give you a run down of what 'JnJ23' was trying, and obviously succeeded, to do.

A lot of people like to throw in a cheat meal every week that lets them eat whatever they want. This thread was basically a competition to see who could eat the 'most cheatiest' of all cheat meals. It was basically a free-for-all of eating and I really don't think anyone could actually win, without losing. Reading what some people ate was pretty funny, so I suggest you check it out. Bon Appetit!

Picture Thread Of The Week

Arms How Big, And How Long Training? 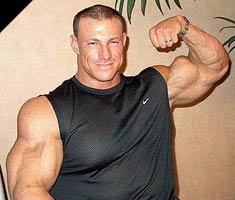 They are the first things that girls notice with your shirt on and most guys envy other guys with big arms. So, this week's best picture thread is all about the arms. 'tek.' has asked everyone to post a picture of his (or her) arms along with how long they've been pumping them in the gym.

What we get is a compilation of gun-shots (not those kind) that are pretty impressive. Check out the thread here.

Funniest Thread Of The Week

The "Things Newbs Should Know" Thread

Because Bodybuilding.com is just so damn popular, there are more and more new members each and every day. For the people that have been around here long and have seen questions upon questions answered to death, seeing the same threads pop up can get very tedious and very annoying.

"NO! Your 'curls for girls' routine
doesn't make you a bodybuilder!"

Whether we like it or now, new members will still be asking the same questions no matter how much we've beet the answers into the ground. This thread is basically a collection of things that new people should know before starting another new thread. Please add your two cents, at it will help everyone in the long run. Check out the thread, which was started by 'dbish77', here.

Best Of The Forum

Each week there will be new posts here of the best threads and posts from the forum. Stay tuned to see what is posted next.