Fitness Amateur Of The Week: Tish Defied Age With Iron!

Tish looks better at age 38 than she did in her 20s because of consistent clean eating coupled with intense training. Get the diet and workouts she uses to defeat mother nature!

Growing up in the small town of Leakesville, Mississippi, I grazed "Muscle & Fitness" and was mesmerized by the shapely and muscular bodies. I dreamed of competing in high school and told everyone that I would. I received a hand-me-down weight bench from my aunt and uncle and remember trying to go on an all tuna and potato diet.

When I hit college, I took a weightlifting class and loved it, but I loved the college life more and put off my dreams to live in the moment. A few years later, I got married and had a child. I vowed to have a college degree by age 30 and did. By that time, I was tired, overweight, and divorced.

Six years ago, I was still an out of shape, overworked elementary school teacher when a coworker asked me to run a 5k with her. I was skeptical at first, but eventually committed to and finished the run. After that, I ran like Forrest Gump, lost lots of fat, and became skinny fat. 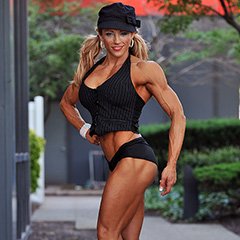 I didn't see real changes until I hit the weights. I couldn't afford personal trainers at the time and didn't know what to do, so I followed my friends. Soon after, I had a regular gym partner who held me accountable to make training a habit.

During my initial gym push, I met my husband, who's a P.E. teacher and coach. He lifted for most of his life and was a great trainer for me. We read Tosca Reno's "Eat Clean Diet" together and transformed our bodies. The real changes came with a clean diet. I felt better and had more energy. A year later, I signed up for my first
figure competition. 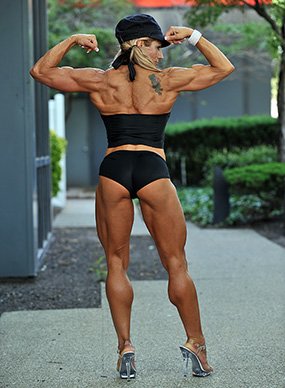 My dream to become a professional competitor started at age 16. I'm fascinated by the power to change myself from frog to flower. I love the changes I make. I like to look in the mirror and be happy with the way I look. I look better now than I did in my teens and 20s.

What/Who motivates you to live a healthy lifestyle?

I couldn't do any of this without my husband Sam. We share the passion to be fit and healthy. He encouraged and supported me to follow my dreams. I recently competed in the NPC figure division at my first national qualifying competition at Bev Francis's Team Universe in Teaneck, New Jersey. I placed high but discovered that I should show off the muscles I worked for in the physique division.

From July 5 to August 17, I learned the five mandatory poses and the one-minute routine to compete in physique. I competed in the local Heart of Dixie and won overall physique. Two weeks later, I competed in the IFBB North Americans in Pittsburgh, Pennsylvania, and won first place in open and masters.

Having a partner who enjoys the healthy lifestyle is crucial. I hold myself accountable when I enter a competition. Not wanting to look bad on stage is a motivator. I plan to meet friends at the gym also and don't want to let them down. 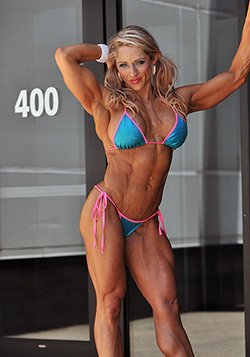 "Nothing tastes as good as I'm going to look on and off stage!"

I will compete at the pro level in 2014. I want to be on the Arnold and Olympia stage. I'm thankful to have my coach, Chris Carter, of Team Fx. Chris is awesome at helping me look the best at competitions. He knows exactly what to do to get me stage ready.

As a competitor who must stick to a diet, I tell myself that nothing tastes as good as I'm going to look on and off stage!

My favorite fitness competitors are Ava Cowan, Larissa Reis, and Dana Linn Bailey. I believe my physique looks similar to Ava's. I like to put my pictures alongside hers for comparison. I'll compare myself to Dana this upcoming year because she set the bar high by winning the first Olympia physique title.

Bodybuilding.com is the best informative website for anyone interested health and fitness. I always tell my friends to check it out and create a BodySpace account to track their workouts with progress photos.