A cleat to the temple ended Taryn's soccer goals, Lyme Disease threatened her existence, but fitness brought her back to the light.

How did your fitness journey begin?

I was the only girl in my neighborhood growing up, and I could always be found playing street hockey with the boys until it got dark. I found my niche with soccer, and have been playing since I could walk. I played on several teams: local, travel, school, and premiere. I also ran track: 100 M dash, 4x100, and 200 meter dash, but I was really passionate about soccer and had a solid future with as a premiere goalie.

In 2007, everything changed. I was in goal in a game early in the season and received a metal cleat to my temple as I was going to pick up the ball in my box. I don't remember much of my freshman year of high school. After months of debilitating migraines, memory loss, and straight A's slipping to D's and F's, I went to see a sports medicine doctor who specialized in concussion management.

I was diagnosed with Post Concussive Syndrome. For most people, this can last up to six months. I was one of the small percentage of people with this—at the time—rare syndrome to be diagnosed with it permanently. I could no longer play contact sports. The risk of becoming severely brain damaged—or even worse, dying—was too great. I remember that conversation like it was yesterday, and it took me a long time to get over it. I tried getting back into track and field and I did well, but it didn't challenge me enough.

Flash forward to 2011 ... I was a freshman in college, extremely sick to the point of not being able to move without being in serious pain. I had gained and lost 20 pounds three times. I had been diagnosed with everything from Hashimoto's Disease to Lupus, and doctors even told me I was delusional. After countless tests, I was diagnosed with Chronic Lyme Disease.

I was sick of being in pain, sick of being out of control of what my body was doing, so I went to the gym. I was a gym goer in high school, but nothing serious. I was introduced to Bodybuilding.com through fellow fitness blogger friends and started on the 20-plus for female plan; I was inspired by athletes like Jamie Eason, Dana Linn Bailey, and Erin Stern.

I had an athletic physique with huge quads and broad shoulders from my soccer days. I thought I could look like my favorite athletes so I went to work. I weighed 98 pounds and was only lifting 15-pound dumbbells. Those 15s turned to 20s, 30s, and so on. 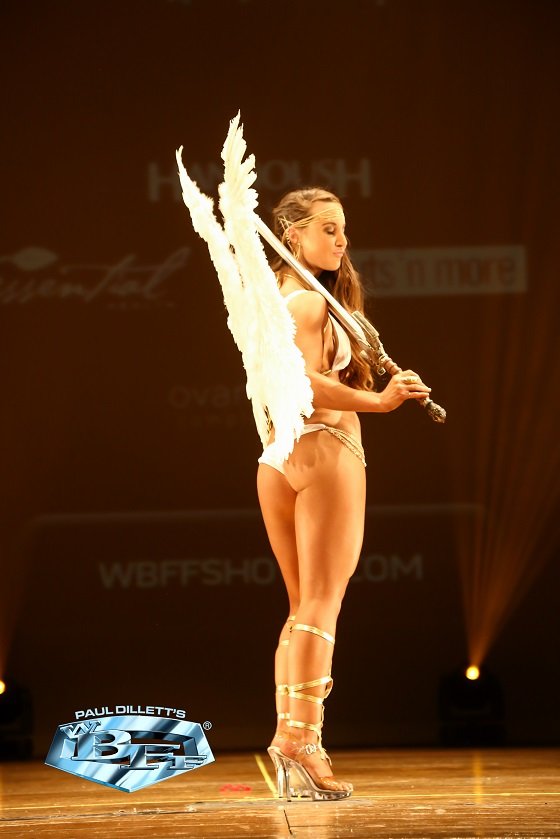 "My followers encouraged me to do my first fitness competition with the WBFF in November of 2013."

I max deadlifted and squatted more than 200 pounds in the first six months of serious training. I kept training hard and eating right. My followers on my fitness blog were excited about how my body transformed from a tiny figure to having big, defined muscles. They encouraged me to do my first fitness competition with the WBFF in November of 2013. My coach, Nicole Costa, trained me for 20 weeks to compete in the fitness category. I started at 105, got to 123, and stepped on stage at 108 pounds.

The journey was hard, but exciting. I didn't place in the top 10, but I was the second-youngest person in the show. I was just proud for going against such established women. I received great feedback, and I look forward to my next show as a figure competitor in 2015. I vlogged my whole experience of my last competition on YouTube, as well as check-ins and workout videos.

Being told 'no' drives me to get better. I was told I couldn't be an athlete anymore because of post-concussion syndrome. I was told not to be active because of Lyme disease. I've had every legitimate excuse in the book to not excel. I refuse to let anything hold me back. I refuse to be defined by my diagnoses. 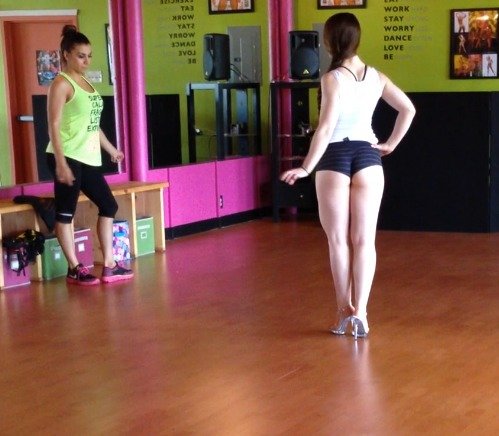 "I refuse to let anything hold me back. I refuse to be defined by my diagnoses."

I am a tiny woman with a petite frame, so people constantly underestimate my ability to lift as heavy as I do—or to be as fast as I am. I like to prove people wrong. Seeing progress makes it all worth it to me. My body has transformed so much since the start of my fitness journey. I know what it's like to be on all ends of the fitness spectrum. I weighed 98 pounds. I now maintain 120 pounds on 2,000-plus calories each day. I gained so much more muscle than I ever expected to. I'm going to keep pushing every single day.

How it makes me feel. Hands down. I think most people don't know how good it feels to live a healthy lifestyle, to be at optimal health. Being active you just feel so clear and energized. It's not just the endorphins from a good workout, but the overall good feeling that comes from living a healthy lifestyle; I would never want to go back.

I started a blog when I got into the lifting and bodybuilding aspect of fitness. I found a lot of inspiration from fellow fitness bloggers; some suggested checking out Bodybuilding.com to get some workout splits. BodySpace has become a form of inspiration for me. The people are so encouraging and it's awesome to see everyone else's progress. Whenever I don't have the motivation to go to the gym, I look at the Bodybuilding.com Fitness 360 videos of all of the athletes, and I am instantly fired up and read to kill my workout.

I am training with the help of my boyfriend Corey in this (fairly long) offseason. I'm looking to compete in April 2015 for my figure debut with the WBFF. I'm taking so much time off to make sure the next time I walk on stage I bring a pro-quality package. I want no doubt in the judges' minds that I deserve my pro card. 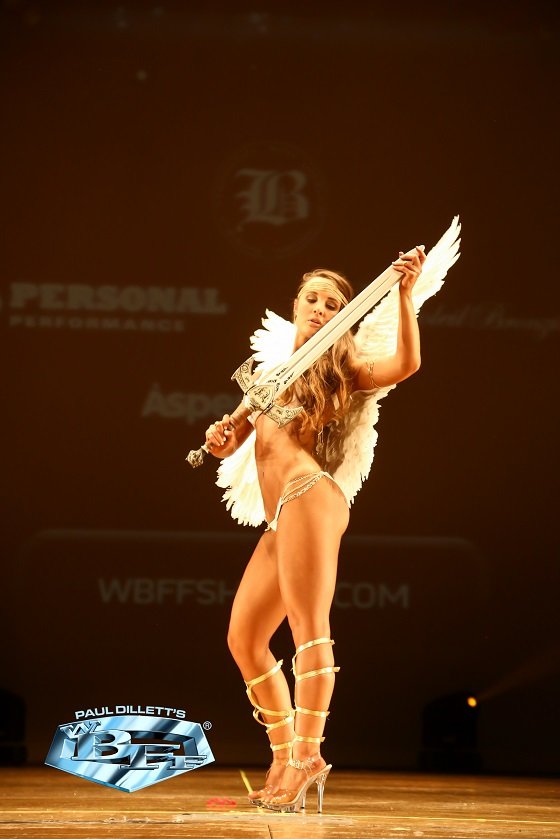 "I want no doubt in the judges' minds that I deserve my pro card."

I'm young in this industry but want to take advantage of that. I got involved in this industry so I could inspire people to follow their dreams. I've had it rough and I know how hard it can be sometimes, but I also know what it's like to reap the benefits of that hard work. I get messages everyday from followers telling me how much I helped inspire them. I want to expand upon that and reach more people. I hope to team up with sponsors, supplement companies, and fitness apparel companies. I want to continue to show people that, no matter how hard their circumstances, there's a way to accomplish dreams if you want it bad enough.

I'm in the process of getting my NASM Personal Training certification. I've had a big push from my followers, friends, and family to train and coach girls and guys to compete. I hope to have my own online and in-person personal training and coaching business (LLC) up and running by the end of 2015! 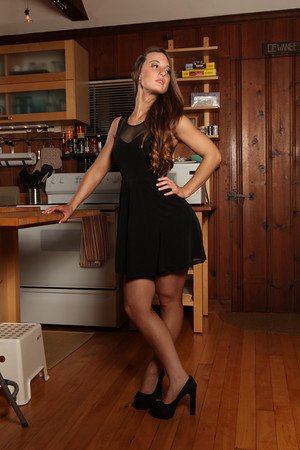 Use proper form. I can't stress this enough! I was extremely successful throwing the hammer in college track and field. My dad made sure to engrave form in my brain as a must! Without good form you compromise your lifts, your gains. It can lead to injury and can take you out of the game completely.

It's hard to pick just one. There are so many competitors who have inspired me in one way or another. If I had to choose it would be Brooke Ericson. Brooke is a real life Wonder Woman. She's overcome so much in her life and I can relate to a lot of it. She's a mother of three girls, works, and competes. She's the woman I hope to become in the industry. I see similarities between us. She has the physique I'm looking to obtain over time, and her outlook on fitness and life are motivating. I hope to be half the woman she is throughout my fitness career.

Bodybuilding.com has been instrumental in helping me reach my fitness goals. I found my first workout split here. Once I got comfortable and gained some knowledge of lifting and nutrition I was able to create my own workouts. I still come back all to order my supplements, workout gear, look for recipes, and for inspiration.

Thank you to my boyfriend Corey, my family, my Coach Nicole Costa, my fellow Body Rockers, Paul & Allison Dillett for creating the WBFF, Kevin Topka for making the WBFF possible in New England, Sarah Fennell, Sarah Gains, Rebecca Maclin, Russell Jordan, Valerie Benoit, to my all my followers, and G.W. Burns for the amazing pictures!