Fitness Amateur Of The Week: Strong-Willed

Her rise through the NPC is no surprise. Jessie Hilgenberg has the makings of a champion. Now her sights are set on the IFBB. Get with her program. She's coming to a stage near you!

In 2008, I attended a local NPC bodybuilding show to watch a friend (who is now my husband) compete in his first show as a heavyweight bodybuilder. I had never been to a show and, at that time, had never known anyone involved in competing. I remember sitting in the audience wondering who all these competitors were and where the heck they all came from. Reno, Nevada, is a fairly small city, so I was in shock at this secret little world I was discovering.

Not knowing anything about competitions, I had assumed bodybuilding was bodybuilding and that's all there was. Then, suddenly, this amazing group of women walked out on stage. Figure. My eyes were glued to these girls on stage doing their individual presentations and comparisons. They looked beautiful, their suits were insane, and they were muscular but still very feminine and graceful. I had no idea what was going on, but what I did know is that I looked liked them and I wanted to do what they were doing. 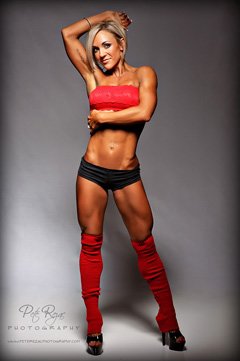 I'm a research freak, so I got to work. Dating that cute bodybuilder from the show was a great resource as well! I was a personal trainer at the time and one of the first things I remember is telling the owner of the gym I worked at that I was thinking about competing. His response was that I'd never do well with it because I'm too short. I have no idea why he said that to me, but I'm so glad I ignored it! In fact, it gave me more drive to get busy with it.

I had my goal set to step on stage in 2009. I started dieting, taking supplements and lifting more strategically - piecing together all the information I could find on Bodybuilding.com. Then, a few weeks into my training, I received the worst news I've ever received in my entire life so far. My dad, at 55 years old, passed away suddenly from cardiac arrest. My number one supporter, my creative force, and the most special person in my life was gone instantly. He had an undetected heart arrhythmia and lost his life in the middle of a workout. I never got to tell him my plans to compete.

I'm a stubborn, strong-willed, and determined Taurus so, of course, I told myself I'd power through and still reach my goal of getting on stage that year. I learned quickly that competing is an extremely selfish and intense process, and if your life, mind, and body are not on board you will not bring your best to the stage. There was no way I'd be okay with myself knowing that I stepped on stage without giving it 100 percent of me. I didn't know back then if I'd compete one time or 50 times, but I knew that regardless it needed to be my personal best every time. So, I took a rain check, continued my research and got on the NPC stage three times in 2010, placing second in every show.

Second place was great, but it wasn't good enough for me. I knew what was wrong. Where I live, there is really no access to anyone involved in figure that would be able to help me with posing. There were bodybuilders that would help me, but I still posed very silly in those first three shows. Basically, my physique was placing me well, but my posing was not quite enough for the win. 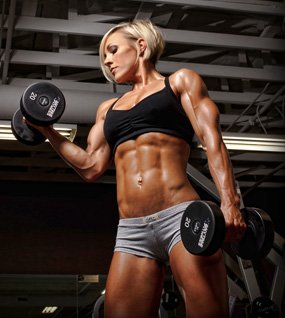 So, without many resources I studied IFBB pro figure YouTube videos and photos and taught myself how to pose. I would practice in front of a mirror and then take the mirror away and videotape myself posing and review it to make improvements. Six months of posing practice later, I got on stage at the 2011 NPC Contra Costa and won the overall title. Yay! As if I wasn't already, I was hooked. I placed in the Top 10 and Top 5 at national NPC shows that same year and competed at the Arnold Amateur in Columbus this year and placed in the Top 5.

There is always room for improvements in my posing, but now it's time to work on the small details in my physique that will hopefully lead me to earning my IFBB pro figure card.

I'm an artist by nature and training for figure has allowed me to look at my physique artistically and change, form, and sculpt it into what I want it to be. I have always had a lot of muscle and was athletic from a young age. My dad was always a strong influence for me to stay fit and be active, but I just never felt like I had a "sport" to focus on once I was older and not playing team sports any longer. Lifting weights, running, yoga and golf were what I did to keep active. But the competitor inside me was just dying to get out! So, when I discovered figure competitions, I knew it was exactly what I wanted to do.

Before I started competing, I never felt like I had a "plan" when I went to the gym. For some reason, I could always help others have a great workout, but I never felt like I had great workouts. It was the goal - the purpose behind my workouts - that was missing. Now when I'm in the gym, knowing I'm training to compete and sculpting my body to look a very specific way, I have the best workouts of my life and am so motivated. Building muscle and feeling strong has given me so much confidence as a woman. I look and feel 20 times better than I ever did in my 20s, and I stay motivated by always trying to get on stage better than I did the last time.

I would have to say my dad. He was in such great shape, and I grew up watching him working out and staying active. He ran 10k races, played handball, water-skied, golfed, practiced Bikram yoga - he even had a full home gym and did cardio and lifted weights every day. When a man like that lost his life at such a young age, it really taught me to take care of my body on the inside as well. I used to push myself to the limit physically no matter the cost, but now it's more important to me to make sure I'm healthy and completely natural. This is the only body I get, and I want to make sure I feel good for many, many years to come.

I'm extremely competitive! Once I started competing in figure, I set my sights on winning an IFBB pro card and I'm not stopping until I do!

Editor's Note: Jessie now holds her IFBB pro card as of July, 2012 when she won first place at the 2012 NPC USA Championships. When she submitted her profile to Bodybuilding.com, she was still an amateur.

My next competition is the NPC USA's and I will be pleased if I can bring an even better physique and presentation than I did the first time competing at this show. I'm working hard and adjusting my training and diet so I can win! I also love fitness modeling and would like to focus more on that once I reach my short-term goal of turning professional.

I've modeled during the last two years and it feels very natural to me. My goal is to be on the cover of Oxygen magazine one day. I also just put on my first two-day competition camp in Reno, NV for figure and bikini competitors. It had an amazing turnout and the camp was incredible for both me and the women. I plan to do many more of them so I can continue to be a resource for girls in my area that plan to compete. 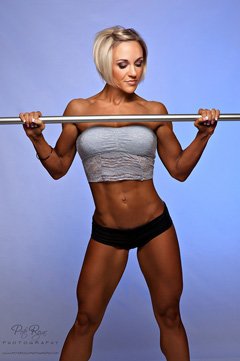 Be healthy and take great care of your body. I coach women to compete in figure and bikini, and the main thing I see is everyone being in such a rush to get on stage. It takes so much hard work and sacrifice; take your time and train until you feel your physique is at its best and your life is in a happy place to get on stage.

I love looking at picture of fitness competitors from the 90s. Their physiques were amazing, feminine, and very athletic. Today, my favorite is and probably always will be Monica Brant. She is beautiful, nice, and has the perfect physique in my eyes. And I love her career.

I use BodySpace to track my goals and post my contests. I also take advantage of the product reviews when shopping and comparing supplements. The exercise library on the SuperSite is awesome! And, of course, I purchase all my supplements on Bodybuilding.com!