Fitness Amateur Of The Week: Eve Danced Into Fitness And Beyond!

Professional dancing provided a physical platform for Eve to display her talents and love for the spotlight. See how fitness took her physique to unforeseen levels of beauty!

I toured for eight years as a professional dancer in ballet companies, musicals, casinos, and cruise ships. Nothing beat performing on stage. During this time, my weight fluctuated between 99-109 pounds. It was hard to control my diet because I couldn't cook and food was catered on the ship and in casinos. I often ate grease-laden food and indulged in after-show drinking. The nightly performances and gym cardio were all I had to stay in shape.

After dancing, being unhealthy wasn't an option. I wasn't happy when my body didn't look the healthiest possible. I wanted to be educated to help myself and others, so I got a personal training and sports massage therapy diploma in London, England, and practiced there for a year. During this time, I became educated on nutritious, organic eating. I also met my husband and moved to America in 2008.

I started working as an assistant choreographer in Los Angeles, California, and taught dancing shows. However, I reached a crossroad in life and couldn't decide what I wanted to do. Nothing filled the void, so I flitted from job to job. I went back to college for business marketing and became a yoga and spin instructor. I was in shape again, but still wasn't at my ideal shape. 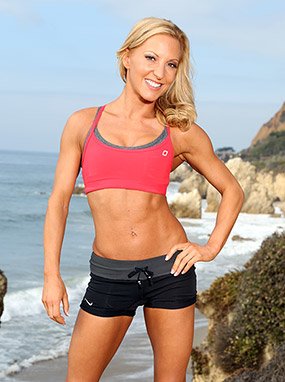 "I wanted to be my best and have a reason to bounce out of bed every day."

In 2012, a light bulb went on when I started seeing gorgeous photos on Facebook of bikini and figure competitors and thought if they could do it, so could I. I couldn't wait to get back on stage. I wanted to be my best and have a reason to bounce out of bed every day. I found coaches and set new goals. Eating six daily meals was scary because I didn't want to gain weight, but I trusted my coaches and the weight fell off while I built lean muscle mass. My metabolism ramped up, I was rarely hungry, and my skin was the clearest it had ever been.

I started training with Team Bombshell in 2012 and set my sights to compete on July 21, 2012, at the LA Championships. Team Bombshell held me accountable and ensured that I stuck to a plan. I was originally going to do bikini, but I built more muscle and became more vascular and leaner than expected, so I switched to figure at the last minute. I switched back to bikini later and competed in nationals during 2013 to get my pro card.

Last year, I created the health and lifestyle blog AngelVDevil.com, which aims to encourage, empower, support, inspire, commit, challenge, and celebrate each other. There will always be days that don't go right, but it's not an excuse to fall off track. It's part of living a balanced life. The angel and devil in all of us is the battle between voices in the head. We control which one wins by making "why" stronger than "why not."

I was hyper as a child so my parents sent me to ballet classes at age 3. When I went to full-time ballet school in London at age 16, the teachers noted that my arms were frail, so I started lifting light weights during the holidays. The lifting led me to discover the gym and start cardio and group classes. I was obsessed with counting calories in the 90s and can literally name the amount of calories in anything.

Dancing kept me in shape, so it was hard to decide what to do when my dancing career was over. After trying many paths, I knew I wanted to be on stage and was inspired by fitness magazines. I researched the IFBB and NPC and wanted to be part of the fitness culture. I didn't realize how much work and sacrifice went into it, but it became an addiction. 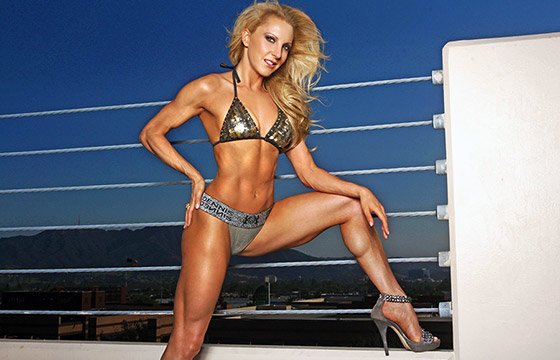 "I researched the IFBB and NPC and wanted to be part of the fitness culture. I didn't realize how much work and sacrifice went into it, but it became an addiction."

Being healthy and fit motivates me. I feel blessed to have the ability to get out of bed every day and do what I want. I don't want to take that for granted. If I'm not giving 110 percent, someone else is, and life's too short for regrets. I want to be the best version of me.

I browse on Facebook and Twitter feeds for inspiration. There are fabulous photos and stories to use for motivation through tough times. I print out my favorites and cover my mirror in them as a constant reminder. I also look at my competition photos and remember what I'm working toward. 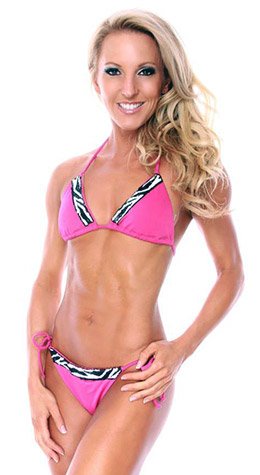 "Be consistent and don't quit what you've started."

I'm continuing to work on my blog and make a difference in people's lives. My dream goal is to get an IFBB pro card. I'm working to strengthen and improve all areas of my life and body to tackle masters. My plans are to keep writing, modeling, and staying in optimal health.

Be consistent and don't quit what you've started. If you follow a plan completely, you will see results. You must commit and stick with it every day.

Justine Munro and Stacey Alexander are great. Beyond physique and beauty, their posing is my favorite. They bring class and poise to the stage.

Bodybuilding.com makes it fast and easy to order my supplements. I like to connect with like-minded people on BodySpace and get inspiration from the newsfeed. The competition coverage is another fabulous source of inspiration. I trust Bodybuilding.com for information regarding training and nutrition.