Check out these awesome discus & shot put tips and drills for track and field athletes!

Players stand in an umbrella shape around the goal at all six positions. Players start by making a good wet pass into set. The 2-meter man then kicks the ball out to another player who is ready to shoot.

If they get a good pass and can catch and shoot, they should. If it is a bad pass or they are unable to handle the ball, then they should pass the ball back into set. If you shoot and make it you stay in. If you shoot and miss you are rotated out to shag balls. You can also add a pass to another player before every shot or even allow the whole set to shoot.

Using a volleyball, stand with left shoulder facing target and chest perpendicular to target. Flex the right knee and lower your hips and shoulders, bringing the ball back toward to ground. Then reach out with left foot in the direction you wish to throw and unwind. Your hips and shoulders should rotate before you release the ball in the direction you wish to throw.

This is a good way to introduce someone to the discus throw because it teaches them the rotational movement without using a discus, which can be difficult to grasp with the hand.

Fundamentals Of The Discus

How To Throw The Discus:

Begin the throw by facing away from the direction you wish to throw. You will rotate one and 3/4 times and will wind up and accelerate to throw the discus. The key to a good throw is a lot of spin. The idea is to simulate the action of a whip. You will twist with the legs and upper body as though coiling a spring. When in the throwing stance, uncoil and release the discus. Hold the discus by the pads of your fingers with the thumb resting against the side of it.

Right-handed throwers begin by rotating upper body to the right and then unwinding back toward the left. Move on the balls of your feet in direction of throw. The Discus trails behind the body. Legs rotate ahead of shoulders and arm. Try to get your feet into the throwing stance as quick as possible.

When your feet are in position, drive hips forward in direction of throw. Hips will pull chest and finally throwing arm. This is like a whip.

Fundamentals Of The Shot Put

How To Use The Glide Technique:

Right-handers, start in a position where your left shoulder is facing in the direction you wish to throw and your chest is facing perpendicular to that direction. Flex right leg and this will lower upper body close to horizontal.

You lower yourself at the hips and shoulders. Left leg is kicked backward and foot rotates to center of ring. Simultaneously, the right leg drives you toward the center of the ring. Upper body stays in a lowered position. At end of glide, pull your right leg under your body and place left foot in position at the front of the circle.

At end of glide, your upper body should still be inclined toward rear of ring. Use your legs to drive you and obtain power. Hips rotate in direction you wish to throw and there is a forward and upward surge of chest. Then powerfully extend the throwing arm and fingers should push the shot away. Do not let the shot slip to the palm of your hand. After put, extend the hand in a follow through motion keeping it above your head.

How To Use The Rotary Technique:

Start with you're back facing the direction you wish to throw. You are facing away from your target. In this action, a right-handed thrower winds up his shoulders to the right before spinning around to the left to throw. When rotating to the left, pivot on the balls of your feet, similar to a Discus throw. Continue to pivot and rotate to the center of the ring with back in direction you want to throw.

Then finish the rotation by bringing the hips around, stepping forward with the left foot and pushing off with the right. Extend your throwing arm through the throw and put with your finger tips. Finish with arm held above head in direction of throw.

Throw a medicine ball against the wall using a push action and catch the rebound. You really need to use the legs on this one to get the power to throw a heavy ball. Keep the head up and extend arms powerfully. This drill can also be done in pairs as well. If you are right handed, step forward with the left and then throw. Do not let your throwing arm elbow drop below the shoulder. 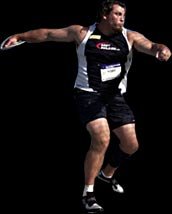 Stand straight facing the direction you wish to throw. If you are right-handed, step with the left foot and throw the shot with your right. Keep your elbow of throwing arm high and begin action by moving body forward.

Extend your legs and put the shot from the fingers, not from palm of hand. Finish throw with putting hand extended straight out in the direction you just threw. Hand should be above head level.

Stand straight up and cradle the shot put under the chin. Flex your right leg and reach back with the left into your putting stance. You should lower your body slightly and shoulders are square to the rear. Push forward and rotate upward and around to the direction of the throw. Thrust your throwing arm powerfully and snap the wrist to finish the throw.

At Eteamz.com, we are going to provide an extensive library of tips and drills and much more from top coaches. Learn about philosophies, coaching basi