The Psychology Of Bodybuilding!

Be honest, truly honest with yourself as you read this. In doing so, the goal is to make ourselves more complete bodybuilders and perhaps more complete individuals as well.

I am about to touch upon a subject that is given little attention within the culture of bodybuilding. A quick internet search will show that the topic is skittishly danced around and / or avoided completely. In writing this I am going to incorporate an element of personal and brutal honesty. What I am asking of you is to do the same. Be honest, truly honest with yourself as you read this. In doing so, the goal is to make ourselves more complete bodybuilders and perhaps more complete individuals as well.

Recently I became aware that my teenage daughter had an eating disorder. Out of respect for her I will skip the details. I will only say that it has been costly and difficult. Shortly after becoming aware of her condition I considered the gambit of possible causes. Television, pop culture, peer pressure, ME! In all likelihood I am the primary suspect behind her obsession with food. At the least I didn't do her any favors. A competitive bodybuilder typically lives the sport. You don't leave it at the gym, you don't put it back in the bag like a golf club. We aren't judged by typically sport criteria, we are judged by our appearance.

While the general population is concerned with appearance, we are obsessed with it. Like many of you, I plan my meals. I time them. I don't eat for the pleasure of it, I eat according to my current goal. For my wife and I this became a divisive issue. Daily she would ask me what I wanted for supper that evening and daily I was unable to answer her. It didn't matter what she prepared, I wouldn't be able to eat it. I didn't expect her to assume my lifestyle and as such I took full responsibility for my meals. I had to be lean, I had to be muscular, I had to be strong. Weight training provided the strength and size while attention to diet gave me definition.

This is what I had exposed my daughter to. During her formative teenage years she was treated nightly to a Father who could only speak of how his workout went that day. She would see me with my shirt off, checking out my abs in the mirror. I have won several competitions and am considered a role model. What I hadn't considered was the type of role model I had been to my family.

Some time has passed and I believe (hope) that my daughter's condition is under control but now I have to wonder about my own. Why am I like this? How did I get this way? Is my experience typical of the competitive bodybuilding community?

Modern psychology has coined a term to describe what can only be viewed as anorexia in reverse. Muscle dysmorphia (bigorexia). People with this condition feel physically inadequate. Regardless of their physical stature they feel small. Some will resort to wearing baggy cloths to cover their perceived inadequacy, many will resort to steroids, and some will become reclusive. As I sit here writing this, emotionally I refuse to accept that I have this condition and yet intellectually I recognize that I have many of its symptoms. Unlike the above I do not wear baggy cloths. I wear tight shirts. I like to be noticed. In restaurants, stores, anywhere. 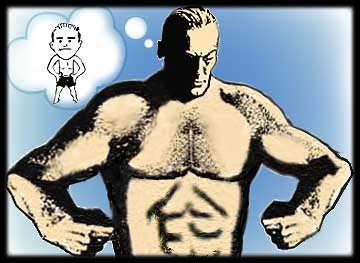 People notice, I see their eyes follow me. Often people stop to ask questions and I like to answer them. On the other hand I still feel small. When I diet to increase definition prior to a competition I feel like I am letting people down. I'm not big enough. I recognize that statistically I am physically above normal and yet emotionally this just doesn't seem to register. When considering weight and height my body mass index says I am obese, very obese, and yet I can crunch down on a well-defined 6-pack. I am far from alone here. I don't know that I have ever spoken with a competitive bodybuilder who has expressed satisfaction with his or her physique. We constantly strive for a goal only to have it move just before we reach it. It is easier to give advice than to take it and I have found myself counseling other lifters on multiple occasions.

I see they have made progress and comment on it. I have seen so many people come and go over the years that I try to encourage people and congratulate them on there physical progress. More often than not however they respond that they are not yet where they want to be. They want more. They want to be bigger. It is then that I tell them to take a moment to accept that they are even now where they wanted to be at one time and this is what I am asking you to do right now. Stop allowing the goal to move before it can be reached. Make your goals small and obtainable. Set them in stone. Allowing the goal to move only perpetuates our feelings of inadequacy. It isn't fair to ourselves or fun for the people who have to endure or obsessions. In competitive track & field a high jumper sets his goals an inch at a time.

In higher levels of competition the goal may vary by only fractions of an inch. It would not be fair to move the bar before the athlete completes his jump and yet this is exactly what many of us are doing to ourselves. We set an initial strength or physique goal only to decide that it is not enough as we approach it. But who moves the bar? We do! Stop it, allow yourself to reach a definable goal and when you do, acknowledge it. Bask in it. Celebrate it. Accept that you have accomplished something and achieved something that was important to you. In doing so you will be forced to recognize your progress and not to focus on perceived inadequacies. In reality what you consider to be a small or weak area is merely a symptom of a much deeper issue that we are attempting to mask with a physical band aid.

Go Back To Your Youth

Consider your youth. As a child I was small and skinny. I was younger than most in my class and as such was a late bloomer. Intellectually I could rival most but physically I was out of step and nowhere was this more apparent than gym class. The mandatory showers revealed that others were reaching puberty far ahead of myself and I could only wonder what was wrong with me. Why didn't I have body hair? Why wasn't I growing? As a result I was afraid of girls. I was considered to be cute and had several girlfriends but still considered myself to be somehow less "manly" then the other boys. Youth is not without its tormentors and I was exposed to several. The "skinny, small, weak, pus$y" comments still haunt me to this day. At the time my only compensation was to take up a keen interest in martial arts however my parents would not allow me to take lessons.

Still, I studied on my own trying to mask my perceived shortcomings with an external illusion of being "tough." When I finally did reach physical maturity I was elated to be of average height even though I was still skinny. The damage was done however and I was firmly entrenched in a mindset that would affect not only my lifestyle but the major decisions of my life as well. Many people suffer from Muscle dysmorphia and not all become bodybuilders. Some buy powerful motorcycles or fast cars. Some will become powerful in business while others will become controlling and or abusive spouses. Review your own life beginning with early childhood. Were you made to feel small and inadequate and if so, how did it affect you? Do you feel as if you were scared by these feelings? Are you obsessed with wanting to get back at those who hurt you? Do you feel as if you have something to prove? While I believe strongly in bodybuilding and the bodybuilding lifestyle I recognize that many of us are using bodybuilding to mask the symptoms of a disorder for which we are not responsible but unwilling participants nonetheless.

Only when we accept and recognize the deeper issues that brought us to this point will we begin to initiate the healing process. Like an aspirin, bodybuilding only mask the symptom, it does nothing about the cause. This is why it is so vitally important for you to recognize and rejoice in your successes, to accept yourself as you are. It is also important for you to recognize that there is a life outside of bodybuilding and to expand yourself as an individual. For some bodybuilders the experience of an injury that prohibits continued training is equivalent to the complete loss of identity.

We so identify and relate to the temporary illusion of strength that we have created that it encapsulates the sum totality of our being. The twin towers of the World Trade Center took years to build but were laid to the ground in a matter of minutes. How much more fragile are we who are made only of flesh and bone. Broaden your horizon and try to experience the world beyond the gym and the physical culture. By spreading your roots you will be able to draw strength from more than one source.

I know of some bodybuilders who don't date or have any social life outside of the gym. They eat, sleep and breathe bodybuilding. Some are willing to die in the pursuit of their goal to be bigger. Does this sound extreme to you? I hope so, but are you currently involved in behavior that would have at one time seemed extreme as well?

Do you workout excessively?
Do you continue to train even while injured?
Do you forsake dinner engagements with friends or family because it will interfere with your routine?
Do you spend excessive amounts of money on supplements?
Do you use steroids?
Are you happy?

I have been honest with you in writing this paper and now I am asking you to be honest with yourself. Life should be enjoyed, not endured. If you feel that this article has hit home than I strongly encourage you to seek out a support group or to consider professional counseling. In doing so you may find that you can still be a bodybuilder and that you may actually come to enjoy it as well.