The philosophy of this system is one thing... building muscle.

We actually had a full-week this week. This week wasn't too bad besides our martial art partners hadn't been showing up. But nonetheless, it was a good week. I got my new stuff from Bodybuilding.com which included some wrist wraps on Tuesday.

On Monday, I benched 335 for 3 sets of 4 reps again this week. Hopefully, my new wraps will help out on Monday. Jon did 265 for 2 sets of 4 reps and a set of 5 reps on the last one on the bench as well. I give us another week or two before we go up. We went back to wide-chest press this week, and I finally mastered 405 for two muscle-rounds and Jon did the same with 345. We both go up next week. We finished up with Pec Deck for 50-rep and then a X-Rep. We did DB Shoulder press this week, I worked hard with the 90s for 2 muscle-rounds and Jon did the same with 80s. I'll be going up to 100s on these for muscle-rounds and Jon will be doing 90s for the same. It's going to be tough...but strength and honor!! My shoulders were pumped after those and then we did the modified bent-over lateral raises and an upper ab exercise to finish off the workout.

Tuesday, I did Rack Deadlifts with 615 for three sets of 5, then a set of 3, then a last set of 5. Another week and I'll be going up on these. We supersetted front pulldowns, rope rows, and db rows to blast our back and it worked for 5 sets of 5. Then DB shrugs for 50-reps. We went down on these to pump up the traps. I did 135s and Jon did 110s. Then we did Machine shrugs to finish them off. 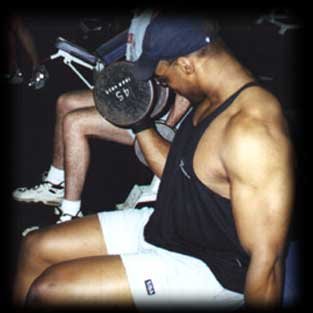 On Friday, me and Jon were kind of like "winding down" the week. We had a tough week with dealing with people and stuff. By any hoot, We started of doing bench press for one muscle-round. I did 265, but didn't complete a muscle-round so I'm stuck there and Jon did the same with 245. We're slowly working our way back to doing two muscle-rounds on these. Then I did high squats to focus on my explosion strength out of the bottom. I did 500 for two sets of 5 and then a set of 6. Jon worked on hack squats because of his knee for four sets of 25 reps. Then I did leg press with 900 for two sets of 6 reps. I'll be going up on these by putting 80lbs dumbbells in the hatch. We finished off the workout with leg curls and some upper abs.

Next Friday, we're off to see Spider-Man and it's going to be a great movie, I know it. But until then, stay big!!
strength and honor

I started bodybuilding when I first took look at Flex Magazine. I've always been amazed by muscles, even in comics.