Skull crushers are the only exercise that comes with a warning built into their name. Who would dream of doing this with heavy weights? Officer Jim Vaglica, aka the strong arm of the law.

There's never been an exercise with a cooler name than the skull crusher. This movement is also known as the "lying triceps extension," but why call it that when you can bellow like a Viking and proclaim that it's your right to crush skulls? You should probably perform them just for that reason alone, but by coincidence they are one of the best exercises for building massive triceps.

If you haven't guessed already, the skull crusher is a longtime favorite in my arm workout. However, I believe even a great movement like this can be made better by pairing it with the perfect finisher right afterward. The Vikings knew this; it's why they followed their pillaging rampages by burning what remained of the village to the ground. The unique movement I pair with skull crushers will incinerate the muscle fibers of your underarm.

Consider yourself warned. Now either run for the hills, or read on and forge horseshoes worthy of a Clydesdale. 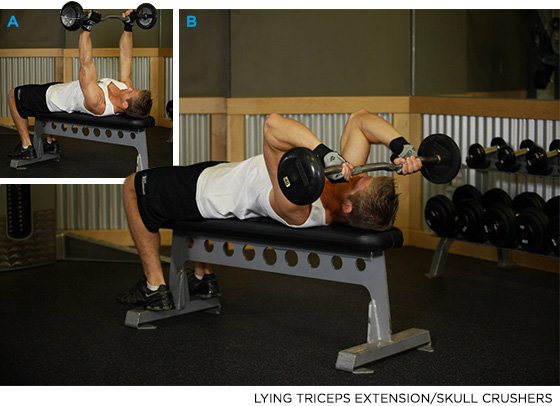 The Skinny on Heavy Skull Crushers ///

The skull crusher is an isolation movement, which many people take to mean that it's not a mass-builder. I say that all depends on how you perform it. With a few tweaks, you can make this into a power move and move some serious weight.

But first the basic version: You can perform skull crushers with an elastic band, a barbell, two dumbbells, or the EZ curl bar. I prefer the curl bar because it's easier on my wrists than a straight bar, which matters more as the weight gets heavier. If you use the curl bar, take a narrow grip using the first angles on the bar, lie back on either a flat or decline bench, and lower the weight overhead while keeping your elbows pointing straight up and about eight inches apart.

As the bar descends, let your wrists curl so your thumbs face the ceiling. Lower the bar in a slow, controlled manner until it touches your forehead, and then push the bar explosively upward to a lockout position. You can also bring the bar to your chin for a greater stretch in the triceps.

The heavy skull crusher is identical to the standard in most respects, but I find that it demands a slightly different setup. When going heavy, I start without the bar and lay back on the bench until my head is right at the edge. This position helps allows me reach back and lift the bar off the floor, performing a pull-over followed by a close-grip bench press to get the bar in the starting position. Once you work up to using 45-pound plates, the extra bit of height makes it easier to get the bar off the floor.

During heavy skull crushers, I also let my elbows drift out to a comfortable position rather than keeping them in tight. I use a full grip, because a thumb-less grip when using a heavy weight raises the risk of turning this move into a literal skull crusher. This exercise can put a lot of stress on the elbows so I make sure I warm up with a light weight for 20 reps, and then slowly add weight for the next three sets until I hit my first working set.

After my triceps are spent from heavy skull crushers I usually perform an obscure, light-weight finishing move. I don't think it has a name, but even if it did, I know it wouldn't be as cool as "skull crusher." 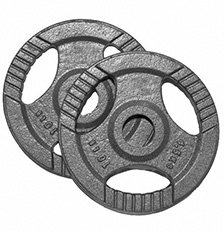 You may have gotten some looks of admiration—or alarm—while you were doing skull crushers with 45s on either side of the bar. Well, forget about that. For my finishing move, I'll remove the heavy weight from the curl bar and replace it with something really lame. I'm talking about a 10-pound plate on each side, maximum.

To set up, lay back on a flat bench until your head starts to hang off the end. Take a narrow grip on the bar, at the first angles, and let the bar hang straight down as if you were going to perform a pull-over. Use a thumb-less grip and try to keep your elbows about eight inches apart. Hold your upper arms in place, parallel to the floor. Now raise the bar until your arms are totally straight out and in line with your body. Lock out your elbows and pause the bar at full extension.

At this point you'll realize why you're using such a tiny amount of weight. Perform as many reps as you can with strict form, and then start to raise your elbows to continue the set. Continue to slowly raise your elbows, a little with each rep, until they're pointing straight up and you're doing strict skull crushers.

Three sets of these and your triceps will be completely smoked!