Don't believe that high-level calisthenics are only for athletes who look a certain way. Everyone can benefit from the unique challenges that come with bodyweight training!

"The great enemy of the truth is very often not the lie—deliberate, contrived, and dishonest—but the myth—persistent, persuasive, and unrealistic. Too often we hold fast to the clichés of our forebears."
- John F. Kennedy

It's no secret that bodyweight training is my preferred method of working out. As someone who has touted the benefits of calisthenics for a long time, it's exciting to see bodyweight training finally gain some attention from the mainstream. Of course, along with the recent boom in popularity, bodyweight strength training has also experienced some backlash.

For every person who writes to me about the progress they've achieved with bodyweight training—and how much fun they've had doing it—there's someone else who has concerns about calisthenics. Misinformation persists and when repeated enough, certain myths can become pervasive. Often it's easier to believe the myth than face the truth, especially when the truth goes in the face of any preconceived biases you might have.

With that in mind, here are some of the most common misconceptions I've heard about bodyweight strength training. Let the debunking begin!

Since an individual's strength-to-mass ratio has to be favorable to practice high-level calisthenics, many of the folks you see performing them tend to be on the smaller side. I am not particularly massive—a fact pointed out to me often on the Internet—and neither are many other notable bodyweight practitioners, so it's easy to assume that calisthenics can't get you jacked. However, one need look no further than YouTube legends like Hannibal for King or Bar Brothers' Lazar Novovic to see proof of the potential to put on size using bodyweight training.

Gaining mass has more to do with your diet and your genetics than whether you focus on weights or calisthenics. As long as they get the proper stimulation to grow, your muscles don't really know if the resistance comes from an external object or not. If you train in the appropriate rep range—for hypertrophy, it's somewhere between 6-15 reps with approximately 65-85 percent of your one-rep max, depending on who you ask—get enough food, and sleep eight hours per night, you have all you need to get as huge as your genes will allow.

Just like many people underestimate the mass-building potential of calisthenics basics like pull-ups, push-ups, and dips, it is also often assumed that those exercises are the end of the line for building strength with just bodyweight. This is simply not true! Pull-ups, push-ups, and dips are just the beginning. There are many more advanced bodyweight exercises that can build much higher levels of strength.

"There are many more advanced bodyweight exercises that can build much higher levels of strength."

If your primary objective is pure strength, you want to find exercises that challenge you in the five-or-less rep range. For experienced strength-trainees, moves like one-arm push-ups , pistol squats , and front lever progressions are excellent choices.

Remember that in strength training, your body only knows that it is being asked to exert muscular force against resistance. The source of that resistance is mostly irrelevant. Though it's easy to simply add weight to a barbell, once you understand the subtleties of manipulating leverage in order to progress or regress a bodyweight exercise, there's no limit to the amount of strength you can achieve!

While taller folks—particularly people with long arms and/or legs—are at a slight mechanical disadvantage for many exercises, many people achieve extremely high levels of calisthenic strength in spite of their height. The idea that a lanky build is unfavorable for strength training is not unique to calisthenics; people with long arms struggle with leverage on both bench presses and push-ups. 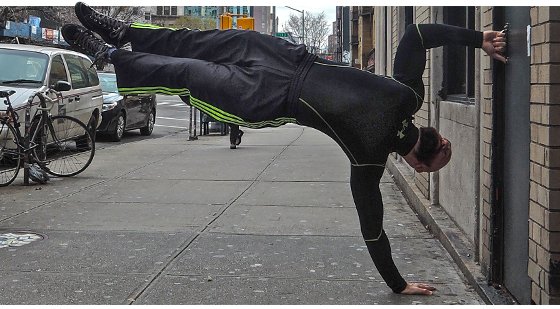 "At 5-foot-11, I'm tall for calisthenics, but it hasn't stopped me from achieving great things in the world of bodyweight training."

Though many of us lack the ideal genetic predisposition to excel at the highest level of calisthenics, we all have the potential to exceed our current capabilities. It's healthier and more productive to focus on improving yourself, rather than dwelling on your perceived limitations. At 5-foot-11, I'm tall for calisthenics, but it hasn't stopped me from achieving great things in the world of bodyweight training. If you want to use your height as an excuse, that's your prerogative, but I'd rather focus on what I am capable of, which is a lot!

Learning to do a pull-up can be a challenge for anyone, but the task tends to be especially daunting for women. Pull-ups require a lot of upper-body strength and women simply don't have the same genetic potential for upper-body strength as men. This does not, however, mean that women are incapable of pull-ups!

If you are a lady who wants to dominate pull-ups—my kind of gal—just be willing to work a little harder for it. The same advice I gave for tall folks applies here. Instead of focusing on the fact that achieving a pull-up may require more work for you, focus on giving your best effort toward each small step along the way. If you're consistent with your training and chip away slowly, a full pull-up can be yours in time. Be patient, stay focused, and remember that good things come to people who train!

Reports of stretching's demise have been greatly exaggerated. In this excerpt from Al Kavadlo's new book, the bodyweight training chief helps you build an effective, personalized practice!

PISTOL SQUATS AND BEYOND

Single-leg squats are a journey, not just a move. commit to a classic lift for strength, balance, and mobility!

Sometimes the toughest strength moves don't involve any iron at all. Heed the call of the one-arm push-up and discover how tough progressive calisthenics can be!