Name: Nick Paniagua
BodySpace: XNick EdgeX
Age: 30
Weight: 169 lbs
Height: 5' 8"
Occupation: IT Analyst\Business Owner
Athletic Background: Skateboarding\Baseball\Soccer
Super Powers: I have a high metabolism that allows me to fend off any and all cardio.
Ultimate Goal: To hit a weight of 180 pounds (a lean, solid, quality 180) and to continue to expand the athletic clothing line I co-founded, "Sacrifice & Honor."

Nick was that typical kid lambasted by bullies. He did something about it. He got stronger.

With the help of BodySpace, Controlled Labs, and his local gym, Nick is more confident and strong than ever before.

He is a regular guy who discovered amazing results through hard work and longevity. He never quit.

What led you to the decision that you needed to get in shape?

I was teased a lot when I was younger for being so small and skinny. It was something that really affected me. I was about 16-years old when my father brought home a bench press and some free weights.

I think it was the purchasing of all the muscle magazines and talking about how I wanted to look like this guy and that guy that gave him somewhat of an idea. I think he knew how much the teasing affected me.

With a bench press right in the middle of my bedroom, I got to work, staying in on Friday and Saturday nights to work out. What started out as a hobby quickly became a passion and I soon learned that it wasn't all about training; nutrition had a ton to do with it. I began to read up on nutrition and started to enjoy all the facts about food and what nutrients can do for the human body. 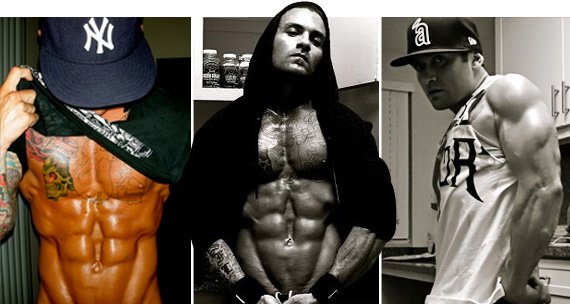 After a year of training in my room, I got my first gym membership at a gym called Super Bodies in Newport Beach, Calif. It had a familiar look to it, much like the pictures I saw in the magazines of Gold's Gym in Venice Beach. I loved this gym and to this day I still think about everyone I met and what I learned in that gym. I was just a runt, lucky enough to have been able to listen to some of the older guys in there who shared knowledge regarding training and nutrition. I soaked everything in like a sponge.

Over the years I continued to train and eat as best I could. It was a lifestyle. It became a way of life for me. I slowly continued to progress and in 2008 I landed my first photoshoot in IronMan magazine as well as a supplement sponsorship with Controlled Labs (I am still with CL today).

2008 was an amazing year for me. Being in a magazine and landing a sponsorship with a supplement company were two things I dreamed of as a kid and it all came true. I owe a lot to Bodybuilding.com and BodySpace. Without BodySpace, I never would have landed that shoot and sponsorship with Controlled Labs.

It was BodySpace that allowed me to track and share my progression with others that soon led to being contacted by professional photographer Ian L. Sitren; he reached out to me on BodySpace. It has been an incredible five years.

What kind of changes have you made since you made that decision?

I started out at 115 pounds as a freshman in high school. You could say I was one of the smallest kids in the school. My goal was to put on as much solid, lean, quality muscle as I could without getting fat or ballooning up: big chest, big arms, big gut. I wanted to be able to fill out an L-XL shirt while having the stomach part of the shirt loose on me. I wanted a V-taper physique. 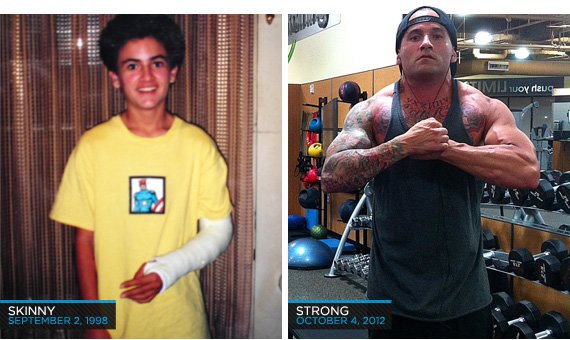 I currently weigh approximately 169-170 pounds and am in the best shape of my life. I can now fill out a large shirt while having the stomach part fit loosely. I still aim to fill out that XL, but know it takes time I want quality gains.

How did you discover BodySpace?

I was browsing the Internet one day, looking for information on bodybuilding and came across Bodybuilding.com. I was amazed by all of the information I found on not only bodybuilding but on nutrition and supplementation as well. I saw something on the site that said BodySpace and I immediately thought that it might be something like an online community for people who love everything about bodybuilding and fitness and sure enough it was.

I thought it was awesome and I immediately set up my profile and uploaded some pictures. It became a place I visited daily. I met new people interested in the same things I was interested in and kept track of my progression. BodySpace showcased my hard work and landed me a lot of great opportunities. I can honestly say that without Bodybuilding.com's BodySpace, I wouldn't have landed such great opportunities.

How do you think BodySpace has helped you reach your goals? 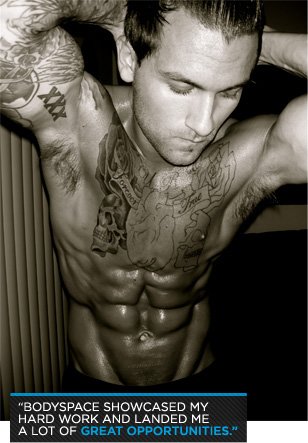 BodySpace helped me in so many ways. It allowed me to track my progress over the years and meet so many great people who helped me along the way. They gave me some great advice when it came to training and nutrition, but it also led to some pretty amazing opportunities. I started on BodySpace in 2007 and by 2008 I landed my first shoot and sponsorship thanks to the exposure BodySpace gave me.

What is your favorite feature on BodySpace?

I really enjoy the ability to create your own threads in the forums. If I ever have a question about training or nutrition or would just like to simply engage in a topic with others I can always hit the forums.

I started a workout journal in 2008 which I still fill out daily; everything from my workouts to what I eat on a daily basis is written down in there. It's a great way for me to keep track of my progress and diet.

I've been using Controlled Labs for about six years and can honestly say their products helped me reach my goals. I'd recommend Controlled Labs to anyone looking to try something new or up their game in the gym.

What has the biggest impact on muscle growth and recovery? 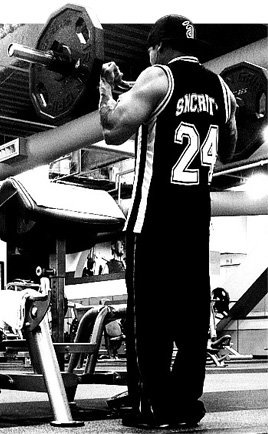 It is a combination of nutrition, training, sleep, and supplements, but the biggest factor in all of this would be sleep. Make sure you rest! It gives you time to recover, which is when your muscles grow. Most people think the more you train the faster you gain muscle. This is the worst thing you can do.

Over-training leads to injury, illness, and can also set you into catabolic state. It can be hard for some to take a day off here and there. It was hard for me and at times still is, but rest and recovery are such important factors when it comes to bodybuilding and fitness.

What type of music do you listen to in the gym?

I prefer to listen to heavy fast-paced music. I listen to a lot of hardcore punk and metal. I feel like it's a sort of intra-workout supplement, definitely helps bring on the intensity. Some of the bands I listen to are: Thick As Blood, First Blood, XBishopX, Buried Alive, The Swarm, Blood Has Been Shed, and Converge. It's gotta be fast and it's gotta be heavy.

What is your favorite way to spend a "rest" day?

I enjoy spending time with my beautiful girlfriend Veronica and our two pit bulls London and Rocky. They are my world. I also enjoy just relaxing at the house and going for a swim. I try to take advantage of those days off as best I can.

Someone will read this feature and consider joining BodySpace. Why should that person become a part of the largest fitness social network?

It changed my life for the better and gave me so many incredible opportunities I could only dream of. It's a great way of tracking your progress as well as sharing your journey with others and meeting new people with the same interests as you. It is also free, so you can't beat that!

BodySpace is an amazing place with so much to offer and I am so glad I made a profile. You are missing out on so much if you don't, so get on it.

Is there anything you would like to say to your fellow BodySpace members? Have any of them made a special impact on your life?

I would like to thank everyone who supported me over the years. The encouragement, motivational messages, and comments are all so inspiring to me. I would like to say something to those looking to gain weight or lose weight: Make that decision to put 110 percent into reaching your goals.

You will not fail if you give it your all in and outside the gym. It has to become a lifestyle and you have to want to make that change. Reach out for support and make the sacrifices needed in order to become what you envision.

Do you stick to one type of training, or do you vary your exercise attacks? 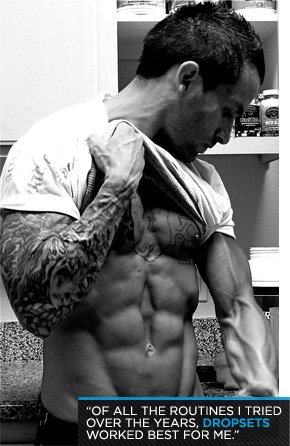 I stick to a certain type of training routine for about three months and then I switch things up a bit as far as certain movements go. I prefer dropsets with every movement. I usually hit three sets, increasing weight while lowering reps, and once I reach my third set, I drop the weight and increase the reps for another two sets. Of all the routines I tried over the years, this works for me best.

Are you a member of any BodyGroups? Why did you choose to join?

I really like the somewhat new addition of the BodyGroup section. It gives you a heads-up of what's going on, almost like a bunch of friends getting together, having a talk and sharing thoughts.

Bodybuilders have school, dayjobs, and families and still dedicate hours to the gym each week. How do you strike a balance? What happens when you get tired?

It is a hectic lifestyle, that's for sure. I work a full-time job as an IT analyst, run the clothing line Sacrifice & Honor and have a family at home. It can be hard. I find myself in the gym at midnight a lot of the time because this is the only time I can go. There are no excuses. If training day falls on a day packed with things to do, you have to fit the gym in there somewhere.

There are days where I am dead tired and if I feel like I need to rest, and I will rest or I will be in the gym working out with a few cups of coffee in me. Right now I am on a two days on, one day off routine. This allows about two days per week of complete physical rest.

Has BodySpace changed much since you joined? How so?

Yes, there are so many great new features such as the BodyGroups section, the ability to share your workout, nutrition and supplement program on your profile, and the ability to see who you are now friends with on your timeline, among so many other things. It's the most advanced social networking site for fitness, and I look forward to logging on every day.

I would like to add my favorite quote: "Discipline is the bridge between goals and accomplishment." - Jim Rohn

How can your fans find you on other social media?