BodySpace Member Of The Month: Nikki Walter, A Year Of Leading By Example

Nikki Walter is intent on changing the fitness culture in South Dakota. She hosts clean-eating parties, competes in the NPC and helps people on BodySpace!

Cheerleading and track events helped carry Nikki Walter through high school and college, but as her interest in sports waned, she found a new career in fitness. She started competing in the NPC, signed up for the 2014 BodySpace Spokesmodel Search and took fourth place!

Nikki lifts out of her local YMCA and trains with fellow Team Bodybuilding.com member Brandan Fokken. Marathons and cheerleading are big parts of her past, but her future is in competitive fitness.

After college, Nikki settled into a job with the Chamber of Commerce, which helped her create a national network of contacts. She seemingly had everything in place. Then, in 2011, her husband was diagnosed with leukemia and died shortly after, at age 35. The loss left Walter with a lot of questions, and she found that fitness and healthy living were a major part of the answer.

She left the Chamber of Commerce and began working in sales to spend more time with her daughter, Addison. She competed in a bikini contest to check a mark on her bucket list. She embraced hard training and nutrition as a lifestyle, making a profound impact in her community and on BodySpace. She and Addison now stage clean-eating parties where they teach friends and their children about food prep and healthy nutrition.

When the Walters visit those kitchens, they teach others how to eat more wisely, and how to use BodySpace to continue improving. They spread the word.

How did you first find out about Bodybuilding.com and BodySpace?

I'm coached by Brandan Fokken, a Team Bodybuilding.com athlete, and Brandan encouraged me to try out for the spokesmodel competition. 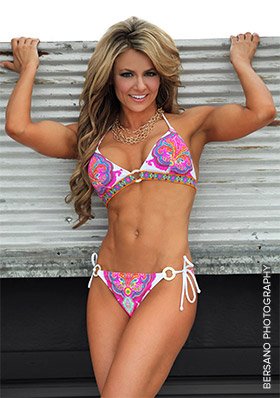 "The people on BodySpace are really supportive of your goals and understand the ups and downs of a fit lifestyle—and that it's a lifestyle."

Before that, I was ordering products off the site. I kind of already knew about it, but because of the path I was taking toward competing, I leaned on the site a little bit more.

I wasn't sure about BodySpace at first. Being in the public eye, I was a little hesitant because of privacy. I was in government and local leadership, so it was an issue. I had to overcome a lot of issues before I decided to utilize it to get inspired and to inspire others.

The people on BodySpace are really supportive of your goals and understand the ups and downs of a fit lifestyle—and that it's a lifestyle. I like the support and enthusiasm people have on BodySpace.

As I started to post more and share my story and have more confidence in what I was doing in posting online, I started to get responses from a variety of people. I try to keep in touch with them.

People with leukemia, like my husband had, would reach out and say "I've been a competitor and I'm sick now." I'll reach out and write to them to see how they're feeling. One of them just wrote back to me to say that he's competing in six months because he's now cancer-free. That is really cool.

I was always a very independent person. When I was married I did a lot of different things, but I also now have this niche of single parents reaching out to me. It's a whole other aspect of my inspiration. They inspire me so much by how they handle it. It's been so rewarding, being able to help these people, to interview them, and to hear about their experiences. For me, it's all about inspiring others and helping make it happen for them.

How much does setting a good fitness example for your daughter drive you?

I know cancer is part of my daughter's genetics, and I wanted to pursue clean eating for her health. I want to be a mom who made a difference for my daughter, but also showed her that she can help others just by doing the things you do in your everyday life. 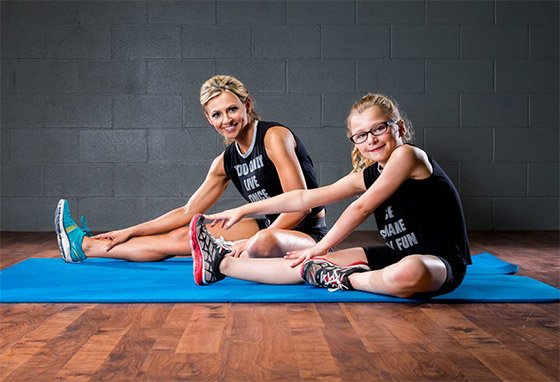 "I want to be a mom who made a difference for my daughter, but also showed her that she can help others just by doing the things you do in your everyday life."

When I talk to parents, I encourage them to do as much as they can with their families and do what's right for them. I'm all she has! For my mindset to be healthy, I want to make sure I'm as fit and healthy as I can be for her. Addison gets excited about it and says, "Mom, we're making a difference!" I compete and get involved, and it's so time-consuming because of my time on social media, training, and because I have a family. But as parents, you have to find that balance.

I involve her in things she wants to be involved in. If we're working on a clean-eating program for a video, I'll ask her what she thinks kids will like, or how we can make it better. I'm not a very good cook, so I'll ask her what we can do to make it better. By engaging and involving her, I think it's helped. If I hadn't done that, I feel like she may have resented it a little bit and felt like it was taking time away from her.

I encourage parents to involve their kids. Addison takes my progress pictures. We discuss where I go on trips. I want her to have a role in what I am doing.

Can you tell us what a clean-eating party is? 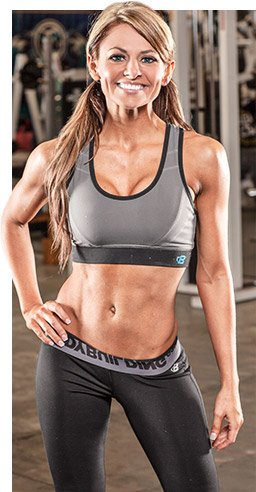 Basically, we host a personal training party, but for food. My daughter does a component of the parties; she works with kids and I work with the adults. I use local resources around the state, but also reference Bodybuilding.com.

We set up BodySpace accounts and give the host a basket of Bodybuilding.com products. I take them through clean-eating websites and state resources they can use locally.

The parties are an opportunity to engage groups of people in a social setting, in the comfort of their homes, and teach them how to prepare a clean diet.

Food prep is a big component, so we can help combat the ease of fast food and help them have good things on hand for families. It's tough, especially with kids in the house.

A lot of the people in my area do a lot of fad diets, a lot of shake diets, and once they get off it, they're not sure what to do. They don't know how to cook or how much.

We teach people portion control and we share ideas with them.

Do you actually eat at the parties?

Of course! I email the host to get a menu, and then we share recipes, shop for what we need, invite a few friends, and we have a food prep party. We only do parties of five now, because it gets really hectic.

We did a launch at the YMCA and 40 people showed up! I can't do that, but I decided to make a side business out of it to help people understand, and encourage people do to it with their friends. We now accept bookings in South Dakota and are trying to branch out into Minnesota and North Dakota.

If you're playing cards, stamping, or getting together once a week with your girlfriends, it's an opportunity for the people you hang out with to learn and share. It's such a social thing.

Addie goes through her little creative snack options for kids, teaching kids how to measure their snacks. If there's Goldfish, she shows them how they can have a cup or just half a cup. She has her own little drawer of measuring cups. We teach parents how to monitor their kids.


How has receiving guidance from your coach helped you as a competitor?

What helped the most for me was the diet. One of the reasons I got into bodybuilding was because of the genetics of my daughter and learning what was in food, but also realizing that how you fuel your body makes an impact on your performance and how you can grow.

Everybody wants it, but they need somewhere to start. Hiring a coach was great for me. I've always been active and able to do my own workouts, but I think it's also great to have a coach to seek questions and advice, because they really know what judges are looking for when you compete.

Do you have plans to work full-time as a fitness personality?

Absolutely! It's my dream. I've followed Jamie Eason for a very long time and I always knew I wanted to be in the industry.

My background is in health and wellness. At one point in my life, years ago, I was offered a great fitness opportunity, but I passed on it because I was getting married and moving back to South Dakota. That was hard for me, because there weren't those opportunities here.

That's when I got involved in the Chamber of Commerce, and that was great. It helped me network throughout the country with a lot of people. But when I quit the chamber, people were disappointed that I was going into a career in sales, because they know I like to help people. I didn't know where competing was going to lead me, but I knew it was going to take me somewhere.

The common perception of women wearing a swimsuit isn't accurate. There's more to it. It's about discipline. I knew by competing that I needed to commit to do it. I was scared as a single parent going into such a drastic change, but I had a gut feeling that it was time for me to go through it. And I'm glad I did, because it led me to Bodybuilding.com.

Do you have any advice for up-and-coming people with fitness aspirations?

Be yourself. We get wrapped up in following other people and what they're doing, but the way to stand out is to be you. Follow your gut feelings. There is so much out there, and if you're open to finding what's right for you, then it is OK to say no to opportunities until you find the right one that fits for you.


Take those risks. Even if it means a drastic change, it's possible. You'll never know unless you try. Never live with regret. Everything I've seen, like watching my 35-year-old husband just ... go, really opened my eyes to a different side of life. If there's something you always wanted to do, do it. Live with no regrets.