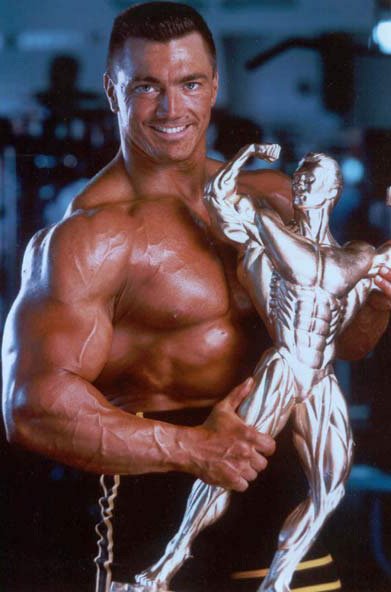 John was born in Chicago, Illinois in March of 1963. His interest in bodybuilding began at a very young age as John became an avid reader of the superhero comic books. He collected over 2000 comic books and fantasized about having a muscular physique like those of Batman, Tarzan and the Incredible Hulk.

John didn't even know what bodybuilding was until he saw a photo of the late martial arts superstar Bruce Lee. He was so impressed with Lee's muscular, ripped physique, John immediately set out to imitate his new idol. He took karate classes, did sit-ups, push-ups and ran every day. When he discovered that Lee also lifted weights to improve his strength and power, John began pumping iron at home.

In order to learn what exercises to do with his brand new weight set, John went out and bought some bodybuilding magazines. After seeing photos of Arnold Schwarzenegger, Franco Columbu, Frank Zane and Lou Ferrigno, John knew immediately that this is what he would do with his life. He went around telling everyone that he would win the Mr. Universe title one day.

John began lifting weights at 14 years old weighing 135 pounds at 5'8". Within two years, he began competing in teenage bodybuilding competitions. John competed in ten teenage bodybuilding competitions between the ages of 16-19 years old. He took first place in the Teenage Midwest at 18 years old and fifth place in the Teenage Mr. America at 19 years old. Knowing he needed more size to compete with the big boys, John used the next two years to bulk up. By the time he was 21 years old, he had bulked up to 230 pounds.

John's next goal was to work his way up the competitive ladder, eventually winning the Mr. Universe title and then competing as an IFBB professional. Over the next several years, John won both state and regional titles before competing on the national level. When he got to the national level, John realized that the amount of steroids necessary to reach the pros was not worth the risk. He decided to compete in only natural or drug-free competitions. He took second place in his first natural contest, the 1991 Natural Illinois.

In 2000, John suffered his greatest setback when he tore his bicep tendon in a freak accident at work one week before competing in the Natural Olympia again. After surgery to reattach the tendon, John was forced to take a full five months off from training to let the tendon heal.

John is now more motivated than ever before to comeback better than ever. He has returned to the NPC and plans to win the heavyweight class at the NPC Team Universe contest and compete in the IFBB World Championships by 2004.

John has written a monthly column for IRONMAN Magazine since 2000. The column is called Naturally Huge and John gives out training and nutrition advice for the drug-free bodybuilder. His website, www.NaturalOlympia.com, is full of information on training, nutrition, motivation, supplementation as well as contest reports, photo albums, bodybuilder interviews and video reviews.

John lives in Westmont, Illinois and makes his living as a personal trainer and fitness consultant. John also spends much of his time giving seminars on natural bodybuilding, fitness and nutrition and often speaks to elementary and high school students about motivation, persistence and success. His future plans include several books and videos on natural bodybuilding and weight training as well as going back to school to attain his teaching degree in Adaptive Physical Education for state schools.