Winston told laughing naysayers he would be in a fitness magazine with a shredded physique. See how he lost 16 percent body fat and proved haters wrong!

In 2012, I got tired of buying extra large shirts to cover my basketball belly and decided to join a gym, mostly to condition myself for basketball. After a couple months of aches, pains, and swollen knees, I decided to hit the weights.

When I started lifting I became interested in bodybuilding and knew I had to change my overall lifestyle, which included eating healthier and taking supplements. I went to the supplement/health store so often that I became friends with an employee who invited me to my first bodybuilding show (NPC Southern States Classics 2012).

At the show, I was inspired by a 59-year-old competitor who won his division and placed second overall. I didn't know that was possible at his age and thought I wanted to be like him. There was a trainer sitting nearby who offered to help me reach my goal. I found out when the next show was (four months later) and put my all into prepping for the stage.

Many people who were on my side when I joined the gym were suddenly naysayers when I told them about my goal to compete. They said, "Your body is finished after 40. There's no way you'll make it." This served as fuel for me to push harder. I picked up a magazine sitting on the counter and told him, "See this magazine? I'll be in there one day." Lo and behold, I was featured in the April 2013 issue of Natural Muscle.

I used to eat and drink whatever I wanted with little regard for my health overall. Now my alcohol intake is very limited and juices and sodas are gone. I don't eat fast food and I'm very choosy when it comes to dining out. I eat clean daily and take every opportunity to be physically active, like parking on the far end of a parking lot to go shopping.

I worked part time at the gym in the morning and worked out immediately after. I then changed my clothes, went to my second job, and worked full time at a supplement shop.

My coworkers called me Superman because I changed my clothes throughout the day and carried around two bags of clothes, food, and supplements. I slept very little, but my motivation from the naysayers kept me going. The most sleep I got during this time was five hours, which worked against me because sleep is important for recovery.

I had difficulty with my shoulders four months later, which limited my upper-body workouts. I was never discouraged, but felt disappointed because my mind/drive was going full speed, but I had to slow down because of my shoulders and work around it.

Quitting was never an option. Any obstacle was just an opportunity to try something new. If I hit a plateau, I changed the routine. The tricky part was scheduling my meals. With my hectic schedule, it was difficult to eat. Some days I had to eat while driving. 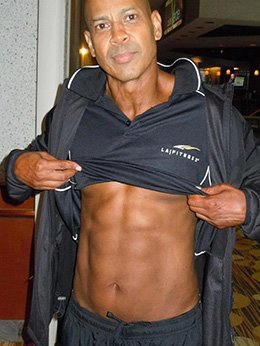 "I plan to continue my bodybuilding career and compete in nationals to go pro."

The most challenging aspect was the diet. I was tired of the same bland, dry, boring foods every day.

At times, I had to force it. Keeping focused on my ultimate goal helped me get through it. I knew that if I wanted to achieve my goal, I had to follow the diet plan.

I plan to continue my bodybuilding career and compete in nationals to go pro. I have a way to go, but with the right team to guide me, I have no doubt I'll make it.

In the meantime, I'm a personal trainer and will continue to pass my knowledge onto my clients.

Bodybuilding.com has been my go-to site since day one. I use it to research workouts, supplements, and diet plans. When I consider using a supplement, I research the product and read the comments, ratings, and feedback provided by other members.