Growing up, I was involved in many sports and was in good shape. During high school, I focused all my attention on football. I lived and breathed it. Working out every day came along with it. After high school, I played college football, but quit after one year. Soon after, I got a full-time job working nights. That's when the problems started. 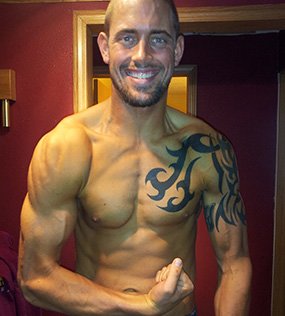 When my new job started, my gym bag started collecting dust. Then the bad diet took over. I was working until midnight and ate fast food or gas station burritos with chips every night when I got off work. I ate loads of bad food and liters of pop and went to bed. This trend continued for three years.

One day I woke up, looked at myself in the mirror, and was disgusted. I dreaded going down a flight of stairs. It was time for a change. I went to a local gym in the area and signed up that day. A coworker asked what my goals were. I told him I planned to do a triathlon by the end of the year. He didn't say a word at first, looked me up and down, started laughing, and said "Good luck with that."

I was determined from that point on. I never missed a day at the gym and read every article I could on Bodybuilding.com about workouts, training techniques, and dieting.

I hit the ground running in March and the weight started falling off. By June, I lost nearly 50 pounds. Watching the scale drop made me push even harder. In May, I signed up for my first triathlon in September. I worked hard every day and never quit dieting. I made meals in advance and kept a food log to ensure I wouldn't fall off track.

I went from nearly falling over after 4 minutes on the treadmill to running for 30 minutes at a time, and then I jumped on a bike for 15 miles. I did cardio six days a week and weight training for five. When the week of my triathlon arrived, I went from 290 to 185 pounds. I competed in and finished my first triathlon on September 9, 2012.

The hardest part was getting back in the gym. I was one of the most out-of-shape guys in the gym. It was hard for me to get on the treadmill, pour sweat, and struggle to breathe after a short while. I was embarrassed by the small weights I had on the bar. But in time, things started getting easier and I just kept pushing forward. 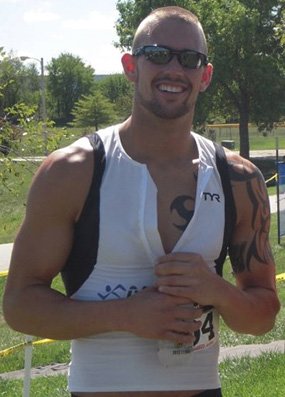 My goals are to keep working hard and bettering myself every day. I hope to start adding mass and strive to put on 15-20 pounds of muscle. It will be tough, but I look forward to the journey. I couldn't have accomplished what I did without the support of my friends and family and the great help and supplements I received from Bodybuilding.com.

Make small goals for yourself in realistic times and keep giving yourself something to work for. Don't be like I was at first—don't care what other people in the gym might think of you. Everyone is there for the same goal: to stay or get in shape. Make a meal plan and go into the day knowing what you're going to eat.

Bodybuilding.com helped me tremendously. I read the articles for hours on eating and proper nutrition. I also read other body transformations and saw what worked for them. I compared what worked for them with what I was doing. It was helpful to get product reviews from other users to see what works or tastes best.