Gabriel’s guardian angel guided his family through shared sets of surgeries to remove their colons. Once he was healthy, his ascension to the weight room was inevitable.

It is with great enthusiasm and compassion that I wish to share my story and my journey to my healthy and active lifestyle. Being someone who has always been very active from a very young age and always part of a sports team as a child to later on training as a professional boxer, it was a huge mental shock to hear that I was diagnosed with adenomatous polyps in my colon.

Adenomatous polyps are a growth that sticks out of the lining of the colon or rectum. Consequently, doctors were to perform a colectomy (surgical removal of the colon).

It all began with my mother who about a year before in May of 2009 was diagnosed with the same symptoms. As a result, she had to have her colon surgically removed and surgeons placed an ostomy pouch. This ostomy pouch was a sort of pocket attached to the exterior of the stomach that allowed waste to sit in.

This pouch is placed for 3-to-6 months depending on how the colectomy wound has healed. The acidity of waste can severely affect a new wound; that is why it is placed on the outside of the body for a period of 3-to-6 months. Not long after, due to doctor's orders, it was recommended that all family members should be tested through a colonoscopy. This would verify if any of my siblings or I had the same condition.

On February 15, 2010, I entered the Jewish General Hospital for my colorectomy. The operation lasted 6 hours and was successful. I lost 60 pounds. I only weighed 100 pounds at that time. I was emotional and depressed.

On April 27, 2010, I returned to the hospital to have my second surgery where they removed the ostomy pouch and reconnected the interior. Unforeseen complications happened between both operations but in general, they were successful.

One complication that followed me for the last two years was an inguinal hernia that was very noticeable. It seemed like I had an extra chunk of skin filled with air placed in my stomach. Therefore, on the November 1, 2011, I went in to the hospital for a third time in order to surgically remove the hernia.

Coming out of the third and hopefully the last surgery, I came out a much stronger person and in the last couple months, I've worked hard to maintain a healthy and active lifestyle. 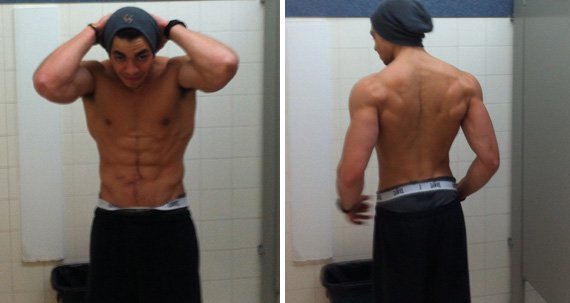 He struggled to achieve health, but now that he has it, he won't let go!

I am extremely careful and prudent on my food choices and make sure that I stay active on a daily basis. Also, this being said, my vision on life has changed enormously and I am extremely sensitive to life's tests and challenges.

I am much stronger, much wiser and mature and have felt the need to extend my hand to help those who have gone or are going through similar challenges as my family and I did.

I am training very hard and mostly eating at my best! Abs are made in the kitchen! Always be positive with yourself and continue working hard inside the gym and outside!

This is my story and one very important thing that I've learned through all of it is to listen to my body and to keep positive. These two things are what kept me going and I have come out of it strong, determined and ready for any challenge.