Paul overcame heart attack and blood clot scares with a dedicated fitness plan. See how this 49-year-old bulked up and stays healthy and leveled on the bodybuilding stage!

My story starts at work after a major restructuring exercise promoted me from shop floor supervisor to senior manager. The move placed me under lots of pressure, but I did okay until a new general manager took over the factory and the pressure to perform intensified because his management style was aggressive. During this period, I started to feel unwell. I developed intermittent arrhythmia, chest pain, pain between the shoulder blades, and headaches.

My work and my doctor agreed that I was suffering from stress, but I didn't believe it was just stress. I had always been in control and relaxed about most situations. I clearly remember an episode at my desk when I had a crushing chest pain and my heart rhythm was fast and erratic. I hunched head down on my desk until the company nurse could see me. She confirmed the arrhythmia and advised a trip to hospital, which I declined to do but agreed to see my doctor immediately. By the time I saw the doctor that evening, the symptoms had passed and stress was blamed as the cause.

I took time away from work soon after, during which there was another minor restructure of the business and I was made redundant from my management position. I was lucky, though, because I found another position within the same factory, but the symptoms continued. I got used to the pains and dodgy heart rhythm and carried on as normal. I restarted my weight training after a long layoff.

One evening after starting my new role, I sat down and watched football on television. I happened to glance down at my wrist and could see the pulse jumping erratically. I called my wife to come and she rushed me straight to the hospital. At first, they thought I had had mild heart attack and placed me on the coronary care ward. Tests subsequently disproved that diagnosis and I was transferred to a medical ward. The doctors conducted a few tests and sent me in for a scan that showed I suffered a massive bilateral pulmonary embolism. The doctors said I was lucky to be alive.

Next came loads of injections, warfarin, blood tests, and INR tests. My life changed permanently. The consultant who looked after me advised that I should be on warfarin for life. There appeared to be no reason for my clots, but based on previous symptoms it seemed likely that I clotted before. I consider myself very fortunate to still be here.

I continued my weight training and started to record my workouts and nutrition. I developed a spreadsheet that keeps track of every aspect of my workouts and meals. I also started thinking about competing as an over 40 bodybuilder. I did some research and found a federation that caters to lifetime drug-free athletes.

I started to lift more weight and eat more food. I started to use sports supplements too. If I changed anything, I showed my records to my nurses and doctors. Keeping strict records and following my nutritional plan provided an unexpected benefit and my INR become stable.

In March 2011, I had a busy week at work reorganizing my work area that required lots of lifting and running up and down ladders. I was also training four evenings per week. On Saturday, I rested, enjoyed a Chinese meal with a couple glasses of wine, spent the evening watching a movie, and fell asleep on the sofa. At 4 a.m., I was awoken with bad cramps in my left thigh, so I got up and walked around the lounge, went back to bed and the pain got much worse.

By 5:30 a.m., I was back up and my thigh was swollen dramatically. By 6 a.m., I could hardly put weight on it, so I went back to the hospital and was treated for a clot in the groin. I ended up on an ear, nose, and throat ward due to bed shortages. I was dosed up with morphine for pain and the swelling progressed rapidly. One nurse was particularly worried and kept measuring my thigh and checking the pulse in my foot.

Early in the evening, I had an ultrasound scan that confirmed I had a massive bleed in my left quadriceps, so I received vitamin K injections to reverse the effects of my warfarin. The swelling moved up and down my leg and my knee was unrecognizable due to the swelling. The nurse came back in later, which was lucky for me because I lost the pulse in my left foot. The next bit was a blur as I was rushed into surgery for a fasciectomy to relieve the pressure.

I awoke on the ward with my thigh heavily bandaged and a 16-inch open wound. The swelling was so severe that the surgeon was unable to close the wound. At its widest, the wound was 6 inches across. I had five more operations to close and change the dressings. I was finally driven 50 miles by ambulance to another hospital for plastic surgery as the only way to close the wound was by skin graft. Luckily, they were finally able to close it with 96 staples. My thigh looked like a zipper. The following months were filled with infections and fluid draining before I returned to work.

I spent lots of my downtime planning to return to the gym. I was advised that I couldn't do certain exercises to train legs. The surgeons managed to close the external wound but not the muscle fascia, which left me with instability in that leg. Not to be deterred, I put my creativeness to the test and built gym equipment that allowed me to lift heavy safely. I also purchased a leg curl/leg extension machine to isolate the quadriceps muscles to rebuild my strength. I started slowly and gradually rebuilt my leg strength.

I was focused to get bigger and stronger than ever before and wouldn't give in. I wouldn't let my life be ruled by my condition. On July 15, 2012, I watched my first bodybuilding show and was blown away by the older competitors. It was there that I decided to set a goal and compete. I hung pictures on the wall at my home gym of competitors from the 2012 Southwest Show. When it got tough, I looked at those guys.

In February 2013, I topped 280 pounds and started cutting calories every 3-4 weeks. My training stayed consistent and I made adjustments. I incorporated daily rowing at 6 a.m. before breakfast. The weight started to drop off dramatically. This has had an effect on my INR, but there was no threat to my warfarin dosage. My INR clinic is fully onboard with my decision and my condition is under control.

I have a mechanical engineering background and like to use structure and data to track my progress. I keep notes of everything I eat and every rep is recorded and monitored.

To assist me, I developed a nutrition planning Excel spreadsheet and training journal to track my progress and make necessary adjustments. The biggest impact on my training was to commit to competing. Once I entered, there was no going back.

The hardest part was dieting. I have medical issues that are affected by dieting. Keeping everything in balance took work, but the results made it all worthwhile.

I will be entering more competitions. I'm making huge progress and am targeting a top three finish in the coming season. 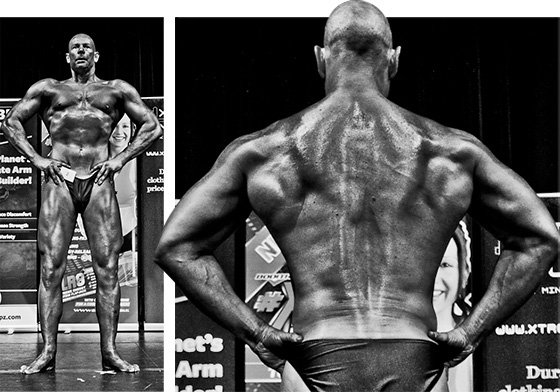 I was inspired by many people on BodySpace and used Transformation of the Week articles as motivation.