Sandra beat cancer, survived a divorce, finally achieved her competitive dreams and set a superb example for her young daughter. See how she cut to a size 4!

During my childhood, I was always the chubby sister. For most of my teenage years, I was above average in weight. Not necessarily overweight, but always self-conscious and disliked being in a bikini in front of anyone or even wearing shorts. Into my adult years, I was the typical yo-yo dieter.

Because I didn't have the time to play sports in high school, I decided to take weightlifting as an elective my junior year. I realized right off that I was strong and I was good at it. I took it again my senior year and once out of high school, it was my main source of exercise in the gym. Shortly after that, I attended my first bodybuilding show as a spectator and fell in love with the sport.

My goal was to compete one day. Bodybuilding was no longer just exercise, it became my hobby. The sport of competing was a little harder to grasp. Although I was disciplined for the hard and rigorous workouts, my discipline in the area of food was not so strong. 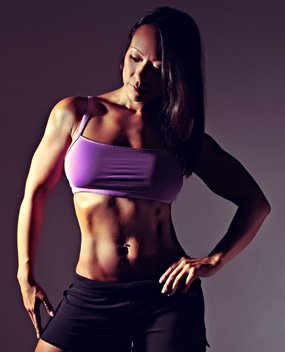 Beginning in my college years, I would have episodes of binging (no purging, just binging). Food was my stress relief and my emotional crutch, the way I celebrated and the way I was comforted. Sometimes I would sit and eat thousands of calories at a time, as if I couldn't control myself. It was an eating disorder.

No one saw me do it and I was always so embarrassed afterward. Like "what is wrong with me?" This is why no matter how much I exercised, I couldn't lose or maintain weight. All I did was gain. There were good years and there were bad years, the typical master of yo-yo dieting.

At the age of 29, I started having very bad lower abdominal cramping and other symptoms related to pain. I started seeing multiple specialists and being tested for every abdominal illness imaginable.

In February 2004, I had a colonoscopy performed and that's when they found a tumor in my colon (unrelated to the real source of pain which was later diagnosed as Interstitial Cystitis).

I was referred to a surgeon and he told me he was pretty certain it was cancer. I cannot explain to you what that moment felt like ... numbness and tears overflowing. My first surgery to remove the tumor was within a week of that visit and it was then confirmed as cancer (non-Hodgkin's lymphoma).

Two months later, April 2004, I had my second surgery to remove the remaining cancerous tissue. Praise God, I have been in remission now for 7 years. But I'll never forget being told that I would have to put off having children at least until I was 2 years into remission. 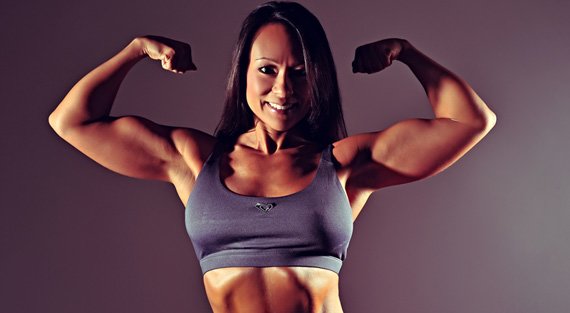 No doubt can disable the drive of the determined mind.

I'll never forget all the tests and scans and moments of uncertainty. I'll never forget the day I got pregnant and prayed I would not pass this on to my child. To this day, if I feel a swollen lymph node if I have a night sweat, if I just don't feel well in general; it brings it all back as if it were yesterday.

If it were to come back, I have total faith and I do not fear it. It's hard for people to understand how I can say cancer was a blessing, but it absolutely was. It opened my eyes to what was important in my life and my spiritual faith became stronger than ever. 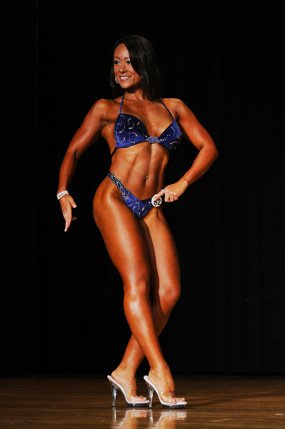 After I had my daughter in June 2007, I found myself going through what many new moms go through. I lost my sense of self. Every moment was dedicated to my baby. I even quit going to the gym.

I worked full time and I immediately wanted to come home to her every night. I ballooned to my highest weight of 162 pounds. A year later, August 2008, I went through a separation/divorce. I was now a single mom of a 1-year old. That was one of the most emotional and trying times in my life.

So what did I do? Instead of emotional binging as I would have done before, I decided to take control. Knowing that this little girl was relying on me to be a good role model and to be around to watch her grow up, I knew I had to take control of my body, my physical and spiritual health and my household. I was in charge and no one was going to do it for me.

I got back in the gym and later met with a trainer who helped me with my diet.

At the age of 36, after 5 months of dieting, I lost a total of 44 pounds and I competed in my first NPC bikini competition and my first OCB figure competition at 118 pounds and placed top 5 in both.

In late 2009, I became Founder/Director of a charity for babies, which I focused all my energy on. Working full-time, running a charity and being a single mom, I lost focus on my nutrition by not making the best food choices. Although I was in the gym 4 days per week, in general good health and I was stronger than ever (ex. mastering a 185-pound deadlift), I gained some of the weight back.

In January 2011, I took control and set a goal to compete again. After 5 months of super clean eating and disciplined workouts, I lost 33 pounds and competed in 2 physique competitions. I also started modeling with local photographers and was picked up by Hutson Talent Agency and Stevenson Modeling Agency. 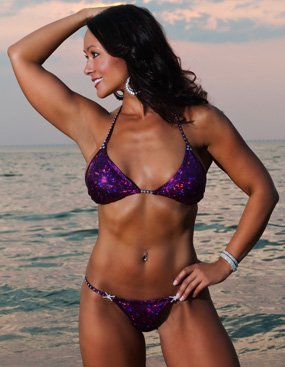 In the past 6 months, I have had numerous photo shoots and media jobs. Even a couple of small TV roles, walked in fashion shows and had my success story appear in publication. The modeling and acting came out of nowhere, so I'm not really pursuing it, I'm letting it happen.

It has resulted from my physical transformation and from the confidence that has been built from it. Doors are opening and it's like living a dream I didn't even know I had. I'm really excited to see where the journey leads. I'd like to one day combine my passions for fitness, modeling and helping needy children.

What's different this time? I've been able to keep the 30 pounds off. At the age of 38, I have finally figured out my body and what foods work for me and which ones do not.

Clean eating not just for weight management but for health in general.

My faith in God who provided strength and refuge, and my daughter gave me the joy to keep going. I'm teaching her at an early age the importance of nutrition and exercise!

I had an amazing support system through my sister, my friends and the people in the gym that were watching me melt the pounds away.

I realized that my body is a science. Everyone is different and will react differently to the various regimens, so you have to really understand your body and listen to it. Until you understand your own body, you should rely on someone trained and certified in fitness and nutrition to help you.

Clean eating takes planning and preparation. Cook enough meals to last you 3 days. This way you don't spend every waking minute in the kitchen. Make a schedule to eat every 2.5-to-3 hours. Keep healthy snacks with you so you don't indulge when you're not supposed to.

Don't be afraid to eat and don't be afraid to lift weights! There are so many ways to eat healthy and still enjoy delicious foods. Yes it takes some sacrifice, but when you're healthy physically, mentally and spiritually, your life feels complete.

Clean eating helps me manage my weight, keeps my joints feeling their best, and helps me build lean muscle. Clean eating also helps manage my cholesterol, control my Interstitial Cystitis and Irritable Bowel Syndrome all without medication, and keep my colon healthy to hopefully prevent any reoccurrence of polyps or worse, cancer.

At the age of 38, I am healthier, stronger and more driven than ever. Clean eating is not a diet, it's a lifestyle.

Additional Info
Check out my blog at sangoode.com. It's an insight into my world of faith, fitness, food and other random events. Thus far I've been able to share my before and after images, my healthy recipes and other tips and facts.

I've had so many people reach out to me and thank me for sharing my story and my helpful hints. Just trying to reach as many as I can!