Don't be fooled by the massive physique, Frank's just a regular guy who works full-time and raises two sets of twins. He transformed (again), lost 100 pounds, and conditioned his mind!

In 1991, I was in a severe car accident that ended my football career and left me partially immobile for nearly six years. Doctors told me I would never walk right, couldn't run, and would never train again. I became self-destructive and dysmorphic. Although I was more than 300 pounds, I saw myself as small. Even on the hottest summer days, I put on cotton armour; three T-shirts, a few cut sweatshirts, a giant T-shirt to hold it all in, and an enormous 5-6X button down. My metabolism shut down and the only way for me to feel big was to gorge myself on food. 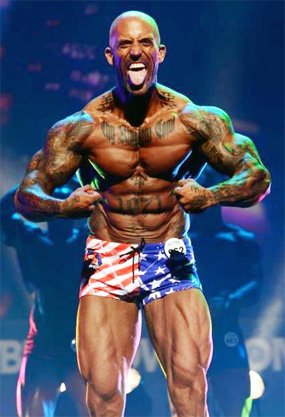 I've written many articles on body dysmorphic disorder. Think of it as reverse anorexia. I went through many years of therapy to start wearing less clothing and decided to change my life no matter how much pain it caused. I wound up losing 130 pounds and started rebuilding myself. I told people that my dream was to compete. They either laughed at me or appeased me by saying, "Oh, that's nice."

Nobody took me seriously until I stepped on the Mr. Buffalo stage in 2001. When I took off my layers of clothing, you could hear a pin drop backstage. My radical transformation is still talked about at the annual show. I took first place at that show, continued competing, and did extremely well in every competition, which earned me a pro card in the WBFF, a dream I had for years.

Unfortunately, once I got where I wanted to be, I was involved in an accident at work and couldn't train for months. That led to my recent transformation. Although I competed for years, I still got big during the off-season and didn't notice because of the dysmorphic disorder. I was extremely strong, but out of breath when tying my shoes.

When it was time for pre-contest, I lost 50-60 pounds. After my injury, I couldn't work out, do cardio, and thought my competition days were over. To finally achieve what people thought I never could and then lose it … that was hard to accept. I slid back into my self-destructive ways: binge drinking, stuffing my face with fast food, and wearing layers of clothing.

The years I spent making something of myself started to disappear and I looked similar to when I first started, which did some major mental damage. I was extremely frustrated with my body and how I felt. It was even more frustrating that I was still afflicted with a disorder that lasted nearly 20 years. I couldn't let my reputation and integrity be ruined, so I decided to transform my body and mind and rid myself of this terrible disorder that destroys lives.

Since I had a problem being small, instead of competing in the bodybuilding division, I dieted hard to compete in the pro muscle model division at the 2012 WBFF World Championships. It wasn't easy, but I did it. I did the opposite of what I did before and what many tell you to do. I took down the posters, put the videos away, and didn't look at magazines. I trained, worked, and raised my children (two sets of twins). I didn't want to talk about it, hear about it, or tell people about it. In other words, I decided to balance my life. This sport and industry is fun and amazing, but if it's all you do, you're missing out. I finally learned to live. 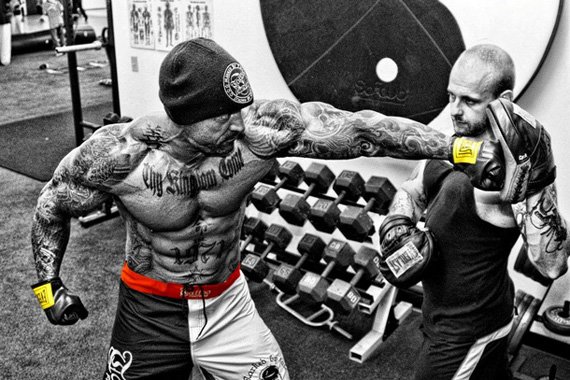 Days, weeks, and months went by, and before I knew it, I lost exactly 100 pounds in 24 weeks. I walked onto the WBFF stage and shocked the world as a muscle model instead of a bodybuilder. But something funny happened. I still outweighed the closest competitor by 40 pounds. Then it hit me—I'm a pretty big guy. I achieved my best conditioning ever. My change was so inspiring that I was asked to be a WBFF ambassador; that meant more to me than you can imagine.

This physical and mental change gave me an entirely new set of tools to help others. Instead of just relating to clients and giving them diets and programs to follow, I can help them unlock their mind, find the root of their food addictions, conquer them, and create permanent change. Now, at age 41, I'm healthier mentally and physically than ever before. When people ask how I did it, I simply smile and say, "I just did it."

Being body dysmorphic, I have a tough time making weekly changes by looking in the mirror, so I used a camera. I took weekly pictures and cropped my head out. I sent them to my email, just like clients would, and looked at the pictures like I was looking at someone else. That allowed me to make the weekly changes necessary to achieve my goal.

The biggest challenge was my own mind. Being dysmorphic, seeing myself smaller in the mirror than others do, and hearing ridiculous comments from people who know nothing about this sport is hard to block out. People don't know the mental damage they inflict with words. 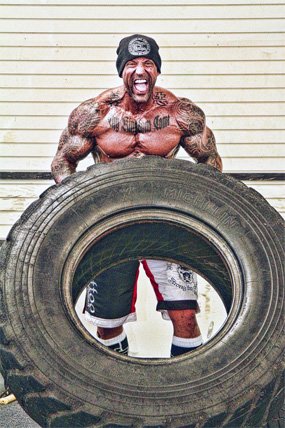 I'm taking transformation coaching to the next level and accepting clients from around the world who had fantastic results under the name Ask Big Frank Transformations. I'm also preparing for the 2013 WBFF World Championships at Planet Hollywood in Las Vegas in August where I'll make a return to the bodybuilding division, but with the new conditioning I learned.

For people attempting to transform my advice is to not look at pictures in magazines and online. Don't study them. Don't look at Mr. Olympia or a world champion and say that's what you're going to look like. Take down the posters and limit your time online staring at industry professionals.

Be inspired for sure, but don't say you won't be happy until you look like them. We all have different bodies; different structures. Be the best you can be. Make changes to your body. If you want to study pictures, study your own. Take them every week. Keep a gym and nutrition log.

Be happy and proud of your results. This sport takes time. Instead of being discouraged because you aren't where you want to be, be proud of the strides you make.

How Bodybuilding.com Helped me Reach My Goals

At first, Bodybuilding.com was a cool site to get supplement reviews and discounts, and to watch the Mr. Olympia and Arnold Classic for free. But then it became something more. I made friends, inspired many, and became inspired by even more. I was featured on We 'Mirin twice and mentioned in clients' transformation articles.

Bodybuilding.com gives me ways to connect with those who can relate to my story. I may be a professional athlete with a monthly column in WBFF Fit and Firm Magazine, but I'm just a regular guy who wakes up every day, raises his kids, supports his family, and helps as many people as possible.