I played as a professional baseball player in the MLB in 1992 when I was drafted into the New York Yankees right out of Murray State University. I retired from my professional career in 2003. At 205 pounds and carrying around 10% body fat, I was very fit at the age of 33.

Baseball is in my blood and even after I left the professional game, my love of baseball never vanished. During my off-season, I had received requests from parents to coach their kids on how to play. I enjoyed sharing my knowledge of the game and seeing them succeed. When I retired, I opened an indoor training facility in Paducah, KY, where I still currently coach young players on baseball.

As with most retired professional athletes, however, I let myself go since I didn't have to train all the time. Over the next five plus years, my weight climbed to 235 with most of the weight gain being fat. A yearly physical at age 38 indicated I had high blood pressure and high cholesterol levels.

Gradually, my energy levels dropped and my joints started taking the toll of the extra weight. I suffered from severe migraine headaches, fatigue, and dehydration. I suspected these all stemmed from the crappy diet I put myself to. I finally decided that something had to be done!

The workout was never a problem for me. I love the feeling! The harder beast to slay was my pesky diet! I developed bad eating habits and chugged soda like it was nobody's business. I felt like my body craved and fueled itself on soda, as I easily knocked back a six-pack of soda on the daily. Imagine, drinking 1000 calories a day like I was paid to do it.

It was only approximately six months ago when I started to get serious about making a change. That's when I went online and discovered bodybuilding.com. I was hooked! The information available was unbelievable and really motivated me to get back into shape.

My two wonderful daughters, Kenzie and Katie Wallace, really helped me kick my ass in gear and stay the course. They told me that daddy needed to stay in shape so that he can fight off all the boys! The thought of it still makes me laugh, but I'm just glad I can keep up now if I ever needed to chase someone down.

Because I had developed very poor eating habits, my diet was one of the most difficult things to restart. As you can imagine, fried foods, fast food, and other junk food are so tempting and convenient when you're so accustomed to it for so long. Plus before I read more about nutrition, I guess I never really thought about what went into my body. I often finished dinner with a bowl of ice cream and a brownie.

Eliminating the sugary foods cold turkey the first month was tough. The cravings get so powerful that sometimes the workout is the wrestling match between my body and mind. 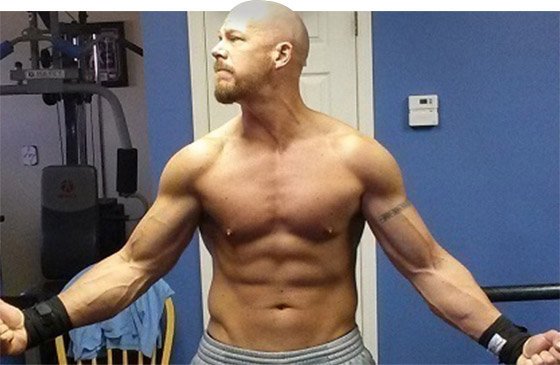 "Don't be afraid to try new foods and exercises before your interest stagnates. After all, boredom is one of your worst enemies!"

I never relented, and after a month or so, my cravings curbed. I'd say kicking the soda habit by far proved to be most difficult. I switched to diet soda for a while and I still enjoy a couple of diet drinks a day.

I just lay off the regular soda, but every now and again I'll have a real soda. But for every soda I drink, I tell myself to drink a bottle of water.

I plan to get certified as a personal trainer to supplement my coaching in baseball. I feel that this would allow players and students to respect my credentials more as a coach.

Kent struck out David "Big Papi" Ortiz in 1999, who ended up being
the 2013 World Series MVP for the Boston Red Sox.

Be patient and expect bumps along the way. It's okay to fail. You don't have to like it, but you must not let it keep you from reaching your goal.

Don't be afraid to try new foods and exercises before your interest stagnates. After all, boredom is one of your worst enemies!

Bodybuilding.com is my go-to exercise resource. It is my reference for any question I may have about a particular exercise, food, or supplement. I also love reading about other people's success stories. I hope mine is just as inspirational for you.