Carbs and alcohol blocked Daniel's abs from the sun and kept him from his goals. Check out the nutrition plan that revealed his cut physique in competition!

I wanted a six-pack for as long as I can remember, but it always seemed out of reach. I weight trained and did cardio occasionally, but my physique didn't change.

At age 25, I fell to 185 pounds after a year of kickboxing and saw a faint outline of my abs. Still, no matter what I did, I never felt like I looked extremely fit, even though I ate fairly healthy and trained 3-4 days per week.

My weight was steady at 185-190 pounds during my late 20s and climbed as high as 195 pounds by mid-2011. To me, getting a six-pack equated to infomercial-style fitness boot camps that leave you absolutely crushed at the end of each workout.

When I saw someone who looked extremely fit, I asked what their secret to achieve a lean physique was. One thing they all had in common is that they didn't much drink alcohol. For me, that was one of the biggest changes I faced to achieve my goal.

In August 2011, I went completely without alcohol and haven't looked back. No cheat days, no excuses. I didn't want to give up socializing with my friends, so I went out with them and ordered club soda when they had cocktails or ate dinner at home and ate something small and healthy, like a salad with no dressing, when I went out to dinner. I faced peer pressure from my friends, but the jokes eventually became compliments.

I trained a lot with weights and cardio to build muscle and accelerate fat loss, but the biggest component of my change was nutrition. Still, as hard as I trained, I never felt crushed at the end of my workouts.

I ate 5-7 meals per day, stopped drinking alcohol, and significantly cut and managed the timing of carbs. I read a lot, learned about nutrition, and began to change the way I cooked to gain control. It was a major adjustment, but I didn't make changes at once. Every 4-8 weeks, I made a small but manageable adjustment, and I built habits gradually. I trained three hours per week, ate five meals per day, omitted alcohol completely, and grew from there. Dietrich Horsey, a former professional competitive bodybuilder, was a crucial motivator for me.

Daniel was recently featured as one of Chicago's most eligible bachelors by Chicago Magazine!

I set out to achieve my goal in August 2011, and lost 25 pounds of fat in my first six months of training. I kept weight training to build muscle, decided to train for my first natural bodybuilding show nine months later, and placed second in my class in April 2013.

Reaching this level of fitness was more rewarding than the physical results. It really strengthened my personal character. 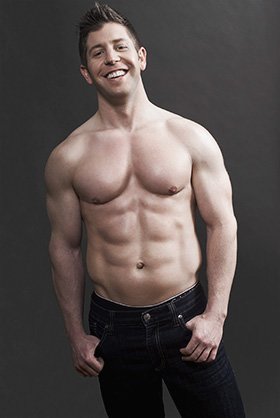 "Reaching this level of fitness was more rewarding than the physical results."

The hardest part was to believe it would work. I had many doubts from my previous experience, but the results came and I kept reminding myself to stick with the plan.

Fitness became a really important part of my life and I plan to capitalize on it. I'd like to compete in another bodybuilding show after I build more muscle in early 2014.

Have faith in your training program and stick with it! It doesn't need to be complicated.

There is a temptation to change when you don't see results, but every change you make takes at least 1-2 weeks to take effect.

Don't underestimate the value of a solid nutrition program. Abs are made in the kitchen.

Take measurements and photos at least once per week to track your progress. It helps to look back at them for motivation. I recommend measuring your waistline instead of using a scale to track progress.

I read countless articles on Bodybuilding.com for tips, nutrition, motivation, and pre-contest prep. I ordered my first posing suit from the site. It's an unbeatable resource.