New Year's Day gets people thinking about the past, the present, and future. Andrew wanted his old body back and his present condition was unacceptable. He sought change!

Those were the exact words that crossed my mind as I sat that morning staring at the picture of me with my shirt off the day after New Years. I hadn't just gained a few pounds nor had I just added a few inches. Time had somehow slowly and subtly managed to turn me into someone who appeared very different.

How had this happened? Nearly my whole life I had managed to stay in shape and live an active and healthy lifestyle. As I stared blankly at the picture before me, I remembered getting up at 5 a.m. to make it to the gym before high school and college, playing football and basketball for the school and competing in other sports with my friends. I had even achieved my dream of competing in a bodybuilding contest in my early twenties. Now there I was: a big fat guy.

After letting this new reality sink in, I quickly realized I had two choices. I could allow this to consume me, make excuses, and find a way to get comfortable with it, or I could do something about it. I knew from my previous days of weightlifting that Bodybuilding.com offered not only the best supplements at the best prices, but the best nutrition and workout information available.

I knew the truth. I had to begin developing inside first for the outside to manifest as a result, had to develop the personal psychology it would take to carry out the game plan. I had to set goals and create a vision and take solid, measurable, and actionable steps to merge with that vision.

I began by taking off more than 60 pounds of fat in less than 3 months and started getting some momentum. After this initial 4-month burst, I decided to intentionally slow down. I didn't want a quick fix and eventually resort to putting the weight back on as I had done so many times before. I wanted a long-term, practical, and balanced solution to the problem.

At the end of 2010 I weighed in at 220 pounds and had cut my body fat percentage nearly in half. In 2013 I decided to push myself to compete in a bodybuilding contest. I weighed in the day of the show at 173 pounds and took 5th place in my class.

Since then I have been able to maintain my weight loss and maintain an off-season weight of 195 pounds. Going forward I plan on competing in September of this year and have my goal is to win weight class.

It was a lot of hard work but totally worth it in the end. I hope to serve as an inspiration to other people and look forward to helping as many other people as possible!

I got most of my inspiration from buying almost the entire self-help section of my local bookstore. I tried to read and learn from other people who had been through struggles in all areas of life and try to absorb how they overcame the challenges they faced and eventually achieve their goals. I started learning self hypnosis that allowed me to breakthrough some limiting beliefs that had been holding me back.

I also watched the movie "Pumping Iron" roughly 10,000 times. Whenever I felt tired or felt like if I had one more egg white I was going to get sick I popped in that movie and was ready to go. 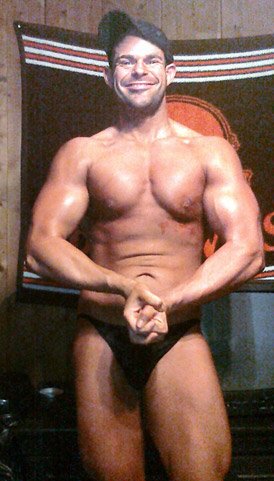 The most difficult part for me was definitely the diet. Staying consistent and not following the crowd was challenging at first. Avoiding temptation became easier week after week.

My goals for the future are to win my weight class this September in a local natural bodybuilding competition. I also would like to grow my business as a Personal Trainer and Fitness Coach and begin pursuing my Master's Degree in Nutrition.

I read articles to keep me focused, including many from Dr. Layne Norton. I especially focused on the motivation portion. I also ordered lots of supplements.