The insecurities associated with morbid obesity overwhelmed Aaron's existence until he found courage to transform. See how he lost 30 percent body fat and 217 pounds!

I was overweight from early childhood into my adult life and never had health issues, but I wasn't happy with how I looked or felt. I couldn't wear nice clothes, was embarrassed to take my shirt off in public, and wouldn't eat in front of people I didn't know. I knew I had to be healthier and lose weight or my life would eventually erode.

I had a physical exam a few months before I turned 33 years old and all of my vital signs were going in the wrong direction. My doctor said that I needed to start meds for high blood sugar because diabetes would take at least seven years off my estimated lifespan.

This was the slap in the face that I needed. I wasn't young and invincible, and if I didn't make changes I'd be reliant on medications that could cause irreversible damage. I had two young daughters and a wife that I wanted to be around for a long time. I wanted to be active and healthy for them and eventually my grandchildren. I needed to set an example of healthy living for my family who also showed signs of my unhealthy behavior.

I thought back to what went wrong before and why I didn't succeed in the past. I admired Arnold Schwarzenegger and dreamed of having that type of physique, but never believed I could. I thought back to his bodybuilding days and it hit me to forget the fad diets and magic pills. Bodybuilders figured out long ago how to burn fat and gain muscle. I needed to understand how they did it.

I started learning on the Internet and looked for legitimate information to lose weight and be healthy. It was a tedious process because the web is littered with junk that promises instant results. I came across a website and an e-book called "Burn The Fat, Feed The Muscle" by Tom Venuto, took the chance, and it was the best $40 I ever spent. I quickly digested the book and applied the eating concepts.

My next step was to learn how to exercise, so I went to the library and read books that outlined several basic exercises that I could do with 5, 10, and 15-pound dumbbells.

Then I discovered Bodybuilding.com, which helped me bring it all together. There was lots of information from thousands of people who were also transforming. I told myself that I would be the ultimate transformation on Bodybuilding.com. 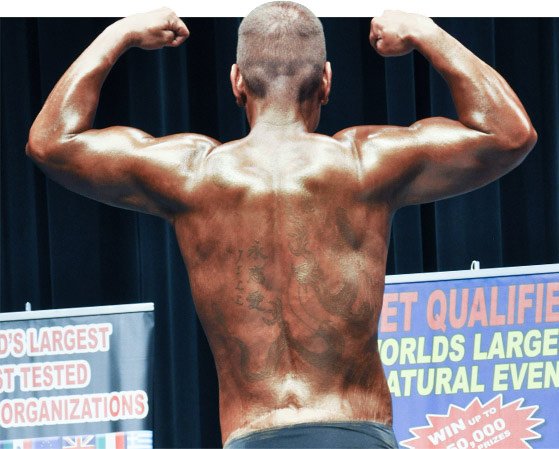 "I told myself that I would be the ultimate transformation on Bodybuilding.com."

I spent several months researching and applying what I learned and decided to join a gym with more equipment to make my journey smoother. It was scary at first because I was still a shy big guy, but I quickly realized that most folks in the gym were doing what I was or maintaining great health.

I drew inspiration from folks who recognized me because I was there all the time. People said encouraging words to me. I was driven forward because I set short-, mid-, and long-term goals. Getting on a bodybuilding stage was the ultimate pinnacle of success.

There were many times that I felt like quitting. When that happened, I went back to the reasons why I was transforming. I took it slow, read articles on Bodybuilding.com, and used my family as inspiration to get me through. I had to make a fundamental mind shift to do what was important to me. This became my hobby. There was no more television or games until I exercised.

When the mental shift took place and I realized that I could make the change a reality, it became easier. I injured my shoulder along the way, had to have surgery to correct bursitis, but never stopped. I worked my legs and did cardio with a sling on. I didn't give myself an excuse to stop.

Giving up the foods I ate before and shedding the belief that I would always be fat was and still is the toughest obstacle. I was an emotional eater and it still rears its ugly head. When stress is high at work or home, my first inclination was to eat. I had to understand those triggers and redirect it elsewhere.

I just finished my first competition and it was fantastic. I was called back on stage and the crowd gave me a standing ovation. It was one of the top moments in my life. The future holds more competitions. For the first time in my life, I'm gaining muscle and increasing my weights. 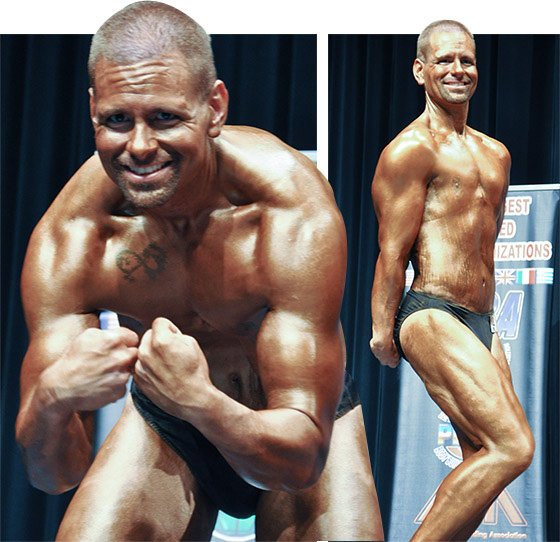 "Don't make excuses or worry about looking bad in the gym."

If I can do it, you can do it. Set yourself up mentally for the long haul. Write down clear goals and refer to them regularly. You cannot hit a goal that you don't aim for or don't know exists. Don't make excuses or worry about looking bad in the gym. Do it for your wellbeing. Celebrate every accomplishment.

Bodybuilding.com provided so much information that it's almost impossible to summarize. The articles on exercise, nutrition, and dieting are invaluable. The inspiration from past transformations is essential, as are the supplements. The support I received on BodySpace was amazing.