Posing Tips: A Beginners Perspective For Success On Stage!

When you're a greenhorn, wet behind the ear, novice bodybuilder like myself, there's a few things you don't expect when your break into this thing. Performing the posing routine is right at the top. Here's more...

When you're a greenhorn, wet behind the ear, novice bodybuilder like myself, there's a few things you don't expect when you break into this thing. You don't expect to have one of the veteran female bodybuilders stand beside you on shoulder day and out shrug you, but it happens.

You don't expect to learn more about the chemistry and anatomy of the human body in the men's locker room than you did in all your years of school, but you do.

You don't expect to start paying more attention to the bodies of your fellow workout warriors than the hottie on the Stairmaster you've been eyeing for months, but you will. 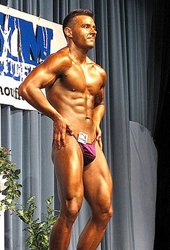 Click Image To Enlarge.
Author, Drew Mayes Is Here To Help You Break
Into The World Of Bodybuilding Competitions.

Despite these "what-the-heck-moments", it's the expected stuff that's the toughest to deal with. The blood, the sweat, the tears, the sacrifice, the commitment, the discipline... the dancing... wait, what?

Okay, so it's not dancing per se, but if you're like myself the idea of posing to music is eerily similar to the thing I try to avoid at all costs when I'm downtown on the weekends. I've basically got looking cool at the bar without actually moving my hips down to an art and I figured I could do the same thing in bodybuilding until I saw my first show live.

Standing in front of hundreds of people including my family and closet friends in next-to-nothing posing trunks? Sure, no problem—I can do that. But after the prejudging and the night show rolls around—choreographing a front double biceps pose with music? That's an unexpected problem.

You see, here's the problem for me and I assume many other guys like myself out there. I'm white. I know—it's a shocker, right?

Don't let the orange glow from the hours spent each month in the high pressure tanning bed fool you. Beneath this graham cracker bronze is a pale white guy from the Northwest. And white guys from the Northwest are not exactly known for their dancing abilities. There are reasons "Step Up" wasn't filmed in the great Pacific Northwest if you get what I'm saying. 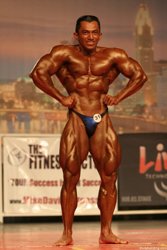 Click Image To Enlarge.
Choreographing Your Poses To Music
Could Lead To Some Trouble.

Now sure, if I hear Young MC's "Bust A Move" blaring over the bar speakers and I've had a few sugar-free red bulls and vodkas (off season, of course) in me, I'll head out to the dance floor and break out "the sprinkler." And while I'm out there you can bet I'll "make the pizza" and "bus driver" dance my way home (driving, driving, passenger on—thank you Scrubs, season six for adding a third move to my dancing repertoire).

Unfortunately, it's tough to "make the pizza" or hit "the sprinkler" while you're in a crab pose (trust me, I tried). But the thing I've learned developing a routine is you don't need to look like a yoked out Michael Jackson out there to have a good posing routine the crowd (and judges) will appreciate.

So if you can dance like Usher, by all means—do it. If you can do the splits like Jean-Claude Van Damme—do it. If there's a song that really reflects what it took to get you to this point or really jacks you up—pose to it. Be you. This is your chance.

And by all means—get some help from somebody who has done it before. While you want to have fun—you want to look your best and you'll need to hit all the mandatory poses for the judges. This is a tough thing to figure out without somebody who's been on the big stage with the lights on bright to guide you.

Go along with Drew as he takes you through the sometimes embarrassing, occasionally awkward, but always amusing stages...